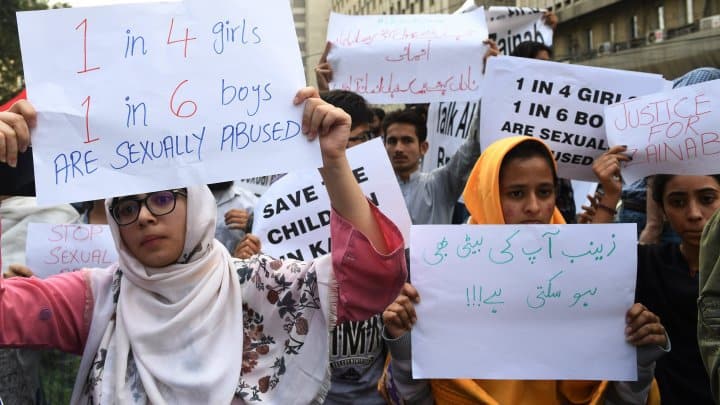 The second day of protests in the Pakistani city of Kasur occurred on Thursday over the rape and murder of a seven-year-old girl whose body was found dumped on a garbage pile, according to the Al Jazeera, CNN and the Guardian.

Four security personnel who opened fire on an earlier demonstration were taken into custody as protesters blocked the main thoroughfare into the city about 50km south of the eastern city of Lahore, utilizing tractors and large cement blocks while shouting “justice for Zainab” to the government on Thursday.

After missing for four days, Zainab’s body was discovered less than one hundred feet from her home on Tuesday. She is the 12th child to have been murdered in the past year within a 1.2 mile radius of Kasur, a city in the province of Punjab – scarred by years of pedophilia scandals.

On Wednesday an autopsy revealed that Zainab was raped and strangled to death. According to local media, DNA collected from her body matched that of five other recent cases in which the bodies of raped and murdered children aged five to eight were dumped in parks, drains and other public areas.

The youngest of four children, Zainab was last seen on 4 January, was abducted outside a religious tuition center where she was a student. Kasur police released a grainy CCTV image of the child walking hand-in-hand with her suspected killer, whose back was turned to the camera, a little further down the road.

Zainab’s mother and father were on a pilgrimage in Saudi Arabia at the time of her abduction. Ameen Asari, Zainab’s father, arrived at the Islamabad airport on Wednesday,  where relatives had informed him that police “didn’t do anything” when Zainab was first reported missing. Instead, they would “come, have food and leave” as “friends and family spent day and night looking for my daughter,” Asari alleged.

Autopsy reports revealed there were torture marks on Zainab’s face and her tongue was crushed between her teeth. When the autopsy was performed, it was suggested she might have been dead for two or three days already.

Police told Al Jazeera on Thursday they were still investigating leads, after interrogating 227 people in connection with the case.

In the first half of 2017, at least 1,764 cases of child abuse were reported across Pakistan, according to the non-profit Sahil child protection organization. At least 65 percent of those occurred in Punjab province, where Kasur is situated.

Zainab Amin’s killing has enraged locals who say authorities in Punjab province have done too little to keep their children safe after a series of similar killings. “We want justice and the real culprit presented before us,” Zainab’s uncle, Gulam Rasul, told the Guardian. He said he feared that police, under pressure to resolve the matter and send protesters home, might shoot someone else.

Punjab’s Chief Minister Muhammad Shahbaz Sharif ordered police to arrest the girl’s killers in the next 24 hours and offered a 10 million Pakistani rupee bounty (over $90,000) for anyone who helps identify those responsible for her death.

In 2015 a pedophile gang in the nearby village of Hussain Khanwala was found to have abused up to 280 children over almost a decade. The group forced children to perform sex acts on camera and sold the footage or used it to blackmail their families.

A report by the Human Rights Commission of Pakistan found police guilty “not only of criminal negligence but connivance” and had deferred to gang members, who came from an influential local family.

The scandal – the largest of its kind in Pakistani history – prompted parliament to outlaw the making of child pornography. But Ansar Sajjad, the regional coordinator of the anti-abuse charity Sahil, said the government had made “more promises [regarding child protection] that were not fulfilled. That is why we see so many problems.”

One in five children are molested in Pakistan said Ayesha Ijaz, programme manager at Aahung, which deals with such cases. As awareness grows the government stated it is trying its best to amend structures and “legislative changes in relevant laws about protection of children are under the process of being implemented,” said Salman Sufi, director-general of the Special Reforms Unit, speaking on behalf of the provincial chief minister.