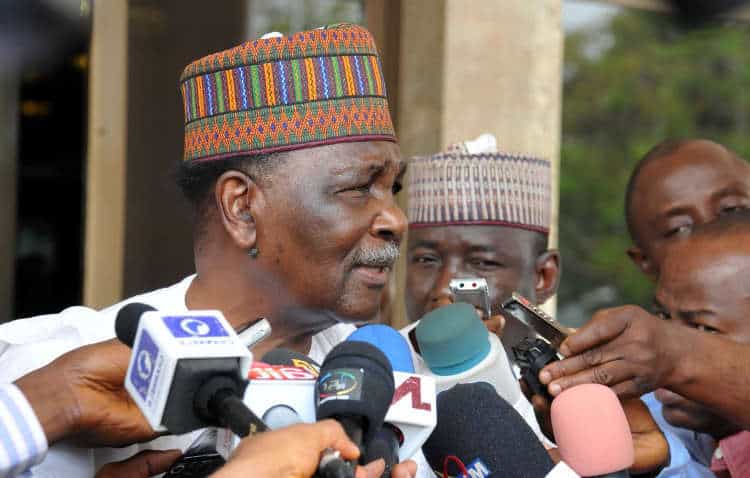 Nigerian former Head of State, Gen. Yakubu Gowon (Rtd.) has warned the lawmakers in Nigeria on their decision to impeach President Muhammadu Buhari.

The former army General said the move might collapse the country if embarked upon by the lawmakers.

Gowon was soliciting for Buhari following a threat by the lawmakers to impeach the president over his decision to withdraw $496m to purchase Tucano aircraft without the legislators’ approval.

The former military leader aired his view while addressing Northern Leaders and Stakeholders’ Assembly led by their Chairman, Alhaji Tanko Yakasai, who visited him in his office.

He explained that the country unity would be at risk if the threat of the lawmakers to impeach the president is not rescinded.

“It will be too early in the day to start impeaching presidents in Nigeria, otherwise, there will be no president that will not get impeached because of these interest groups.

“We need to come together as a people – Arewa Consultative Forum, Northern Elders Forum, and this forum – the three must come together, or else, we will end up dividing our interests thereby polarising the North.

The Chairman of the Assembly, who is a former Political Adviser to Shehu Shagari, Yakasai promised that the assembly will do the needful ensuring peace in the north and the country at large.

He said one of the core visions of the Assembly was to “bring northerners of good standing together to arrest drifts in the region and re-build individual and group confidence among our people.”

He also said “We have constituted sub-committees that will work on northern unity. There are others that will also work on elections and restructuring among others.”

A former Minister of Defence, Dr. Bello Mohammed, said the primary concern of the group was “to make sure we have unity of purpose in the North.”

Among those present at the event was a former Speaker of the House of Representatives, Gha’ali Na’aba; a former FCT Minister, Abba Gana; a former Deputy President of the Senate, Ibrahim Mantu; senators Joseph Waku and Paul Wampana and a former Minister of Women Affairs, Hajiya Maryam Ciroma.

Recently, some members of the house of representatives have called for President Muhammadu Buhari’s impeachment for approving the withdrawal of the sum of $496 million without their nod.

The impeachment move followed a letter which Buhari wrote to the house defending his approval of the money used for the procurement of 12 Super Tucano aircraft from the US.

The money was said to have been withdrawn from the excess crude account (ECA).

Reading the contents of the letter during plenary, Yakubu Dogara, speaker of the house, quoted Buhari as saying: “In the expectation that the national assembly would have no objection to the purchase of this highly specialized aircraft, which is critical to national security, I granted anticipatory approval for the release of US$496,374,470.00.”

He said the letter was sent to the leadership of the national assembly on April 13 and was received by his (speaker’s) office on April 17.

The development angered the lawmakers who accused the president of “overriding” their powers.

Their deliberation on the matter followed a constitutional point of order raised by Kingsley Chinda, from Rivers state.

Citing sections 80 and 81 of 1999 constitution, Chinda said the Nigerian law does not recognize anticipatory approval.

He condemned the approval, wondering what would happen if the lawmakers failed to give the nod.

“There is nowhere in our law that talked about anticipatory approval. We cannot sit down and allow this to take place. It is an impeachable offense. There is no infraction that is worse than this. Let us not continue to sleep. I propose that we commence the impeachment of Mr. President,” he said.

Some other lawmakers who also contributed to the motion supported the impeachment move, accusing the president of seeking their approval through the back door.

Sunday Karimi from Kogi said the lawmakers should write the president and inform him he has breached the constitution and “he should be prepared to face the consequences.”

“This is the time to tell the president that we were elected to serve the people,” he added.

However, Emmanuel Orker-Jev, chairman of the house committee on rules and businesses, said going by the house rules, Buhari’s letter ought to be slated for a second reading before the house could debate it.