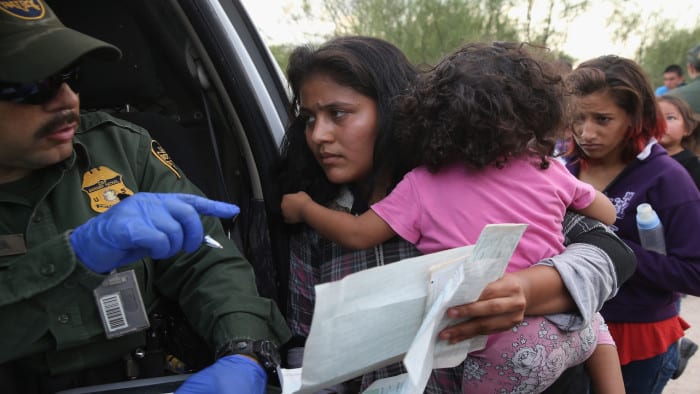 Undocumented immigrants at the U.S.-Mexico border answering questions from US agent in inTexas (Photo by John Moore/Getty Images)

A court filing on Monday by the American Civil Liberties Union and the federal government said that 436 migrant parents who entered the US illegally and were separated from their children might have been deported. Their children were left behind, and the government currently has no plans to reunite them.

Reuters reported that the parents’ absence, which US government attorneys said was “under review” could hinder efforts to reunite families by a Thursday deadline ordered by a federal judge.

Last Month US District Judge Dana Dabraw ordered the Trump administration reunite the children with their parents in a lawsuit filed by the ACLU.

This week’s filing said 829 of the nearly 2500 separated children have been reunited with their parents.

Although the filing indicates the government is making progress, the ACLU acknowledged it’s frustration with a less than transparent process saying it still does not have a list of parents who signed forms electing deportation without their child.

The ACLU wrote in the court filing, “These parents urgently need consultations with lawyers so that they do not mistakenly strand their children in the United States.”

The government claimed 917 parents were either ineligible to be reunited with their children or not yet known to be eligible, according to Reuters. This includes deported parents as well as those unsuitable for reunification because of criminal convictions or other reasons.

The government claims all deported parents were afforded the option to take their children with them, but it’s unclear if parents were fully aware of the terms of any signed agreement.

New York Magazine reported that the ACLU is skeptical of the government’s claims following reports that ICE officials pressured migrant parents into signing voluntary deportation forms. The parents were allegedly told this was the only way they would ever see their children again.

According to New York Magazine, some parents willfully agreed to deportation without their children.

Jose Ottoniel, deported back to Guatemala in June, without his 10-year old son told the Washington Post, “Right now, we think it’s best for him to have this opportunity in the United States, to get out of this place.”

The ACLU challenged the government’s authority to determine a parent’s ineligibility for reunification.

“We’ve asked the court to order the government to provide details about the nature of the charge, conviction, or warrant for each parent whom the government excluded so that we can verify that not reunifying the child is truly in their best interest,” the ACLU said in a statement.