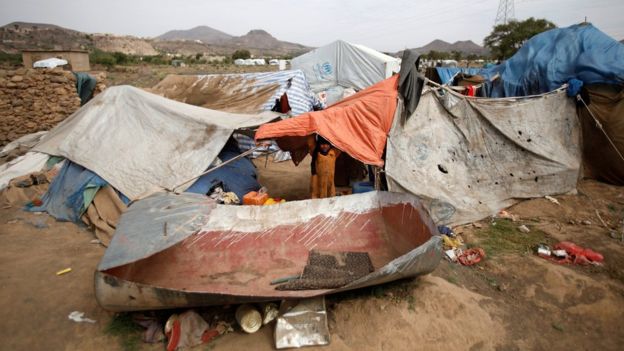 Displaced camps in Yemen via Reuters

The United Arab Emirates (UAE) has long been military allies of the United States, participating in a number of US-led military actions since the early 1990s. However, the Center for International Policy (CIP) reports:

Some UAE military activities have been controversial, including its involvement in helping to put down the democracy movement in Bahrain and its central role in the Saudi-led military coalition in Yemen. The Yemen war has had devastating humanitarian consequences. Thousands of civilians have been killed by coalition air strikes, more than three-quarters of the population is in need of humanitarian assistance, and basic supplies of food, clean water, and medical supplies are scarce.

“According to statistics compiled by the Stockholm International Peace Research Institute, the United States has been far and away the largest arms supplier to the UAE, providing 63% of all major weaponry delivered to that nation since 2009,” the report continues.

Investigations by Human Rights Watch and Amnesty International have revealed the prisons operated by the Yemenis under UAE authority are violating human rights by committing torture and depriving detainees basic human needs.

“What this report looks at specifically are the violations that came into existence after the involvement of UAE troops and the creation of the forces that they back,” said Rawya Rageh of Amnesty International. Senator Chris Murphy (D-CT) has campaigned along with others to limit the US involvement in the Yemen war since 2015.

“The news now of the torture happening in these prisons is, frankly, just going to further radicalize the Yemeni people,” said Murphy as reported by PRI. However, the CIP details how it is unlikely that the United States will diminish their role in the conflict:

The U.S. is poised to be a major supplier to the UAE for years to come. The U.S. has offered the UAE $25.1 billion in weaponry under the Pentagon’s Foreign Military Sales since 2009, which ranks it fourth among U.S. recipients in the region after Saudi Arabia ($115 billion), Qatar ($41 billion), and Iraq ($33.3 billion). These figures represent only offers under the Pentagon’s Foreign Military Sales (FMS) program, which is by far the largest channel for the transfer of major defense equipment like combat aircraft, tanks, helicopters, combat ships, and bombs and missiles. It is important to note that not all FMS offers result in final sales; but they are a good gauge of the U.S. intent to arm a given nation.

The crisis has led to estimates of over two million individuals being displaced in Yemen, while approximately 19 million (70% of the population) are in need of humanitarian assistance.