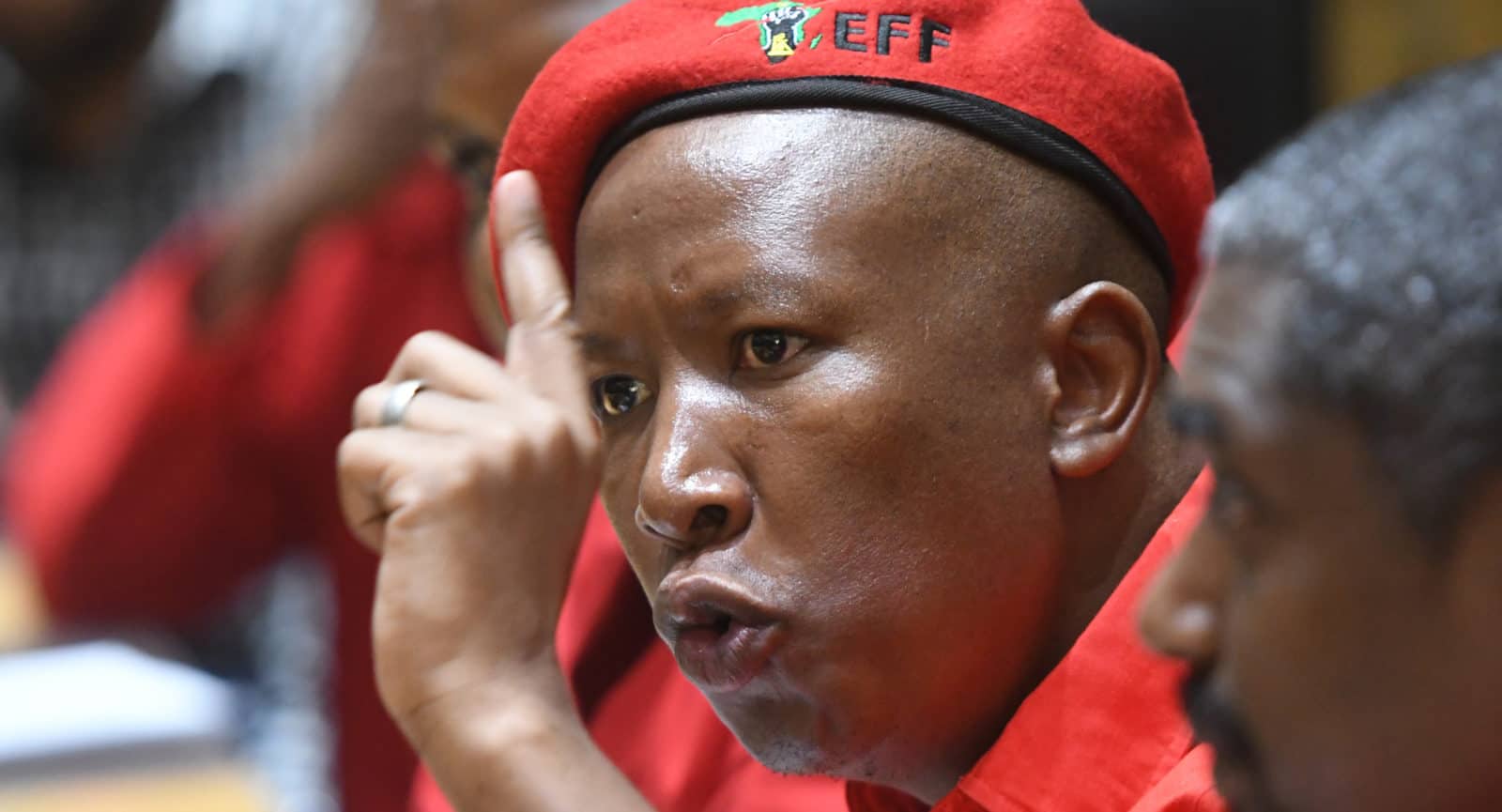 Julius Malema, the leader of economic freedom fighter spoke strongly against Trump for his attempt to sow discord in South Africa

A recent controversial Tweet by President Donald Trump on the proposed land reform by South Africa’s ruling African National Congress (ANC) has not only reawakened the lingering debate over the issue but also indicated that more controversies should be expected.

Last week, President Donald Trump drew the ire of South African government with his bombshell-like tweet on the ongoing efforts by the country’s African National Congress to amend the constitution to allow land expropriation without compensation.

I have asked Secretary of State @SecPompeo to closely study the South Africa land and farm seizures and expropriations and the large scale killing of farmers. “South African Government is now seizing land from white farmers.” @TuckerCarlson @FoxNews

His comment was ostensibly seen as a response to an “Exclusive Investigation” credited to Fox News, with the title “South Africa begins seizing land from white farmers.”

In a swift response, South African Government fired back at the President’s controversial statement on its Twitter page @GovernmentZA.

South Africa totally rejects this narrow perception which only seeks to divide our nation and reminds us of our colonial past. #landexpropriation @realDonaldTrump @PresidencyZA

Trump’s comment only reawakened a bottled-up rage trailing the controversial land policy in the country, something that is not likely to die down anytime soon, if it would at all.

What is ANC’s land reform all about?

On July 31, President Cyril Ramaphosa of the ruling ANC announced plans by his government to amend the constitution to allow expropriation of land without compensation.

Land expropriation is the act of the government taking over privately owned land to be used for purposes designed to benefit the overall public.

He made the declaration during a nationwide broadcast.

Excerpts of the broadcast read:

The African National Congress has just concluded a two-day NEC Lekgotla in Tshwane. The Lekgotla focused on a number of issues, including the current status of our economy, job creation, and land reform. It further engaged on issues of governance, social development and broader transformation which will be elaborated on by the secretary general tomorrow. (Wednesday)

We thought that it was important for the President of the ANC to clearly and unambiguously articulate the position of the organization on two matters that are critical to the economic development of our country and the well-being of its people.

The first is the implementation of the ANC’s resolution on land reform.

The second is about the current economic environment.

On land reform, the ANC applauds our people, from all walks of life – including the rural poor, farm laborers, the unemployed, the landless, urban residents, farmers and traditional leaders – for expressing their views on this critical matter.

Our people have been expressing their views on the land question openly and without any fear or favor.

They have been putting forward solutions on how the land question can be resolved.

This is the constitutional democracy that we fought for.

The ANC reaffirms its position that the Constitution is a mandate for radical transformation both of society and the economy.

It has become patently clear that our people want the Constitution to be more explicit about expropriation of land without compensation, as demonstrated in the public hearings.

There is also a growing body of opinion, by a number of South Africans, that the constitution as it stands does not impede expropriation of land without compensation.

The lekgotla reaffirmed its position that a comprehensive land reform programme that enables equitable access to land will unlock economic growth, by bringing more land in South Africa to full use, and enable the productive participation of millions more South Africans in the economy.

Accordingly, the ANC will, through the parliamentary process, finalize a proposed amendment to the Constitution that outlines more clearly the conditions under which expropriation of land without compensation can be affected.

The intention of this proposed amendment is to promote redress, advance economic development, increase agricultural production and food security.

It will also transform the unjust spatial realities in urban areas.

To accelerate agrarian reform, the ANC has further directed the government to urgently initiate farmer support programmes in depressed areas before the first rains this year.

This should include supporting farmers with tools, tractors, fertilizers, seeds, extension services, finance and access to key infrastructure.

Our economy is facing serious challenges. The recently released figures on unemployment are worrying.

Given this economic environment, the Lekgotla directed the government to move with urgency to develop and implement a stimulus package to ignite growth that will lead to the creation of jobs, especially for young people and women.

These efforts should focus on rural communities and townships.

This stimulus package will be based on existing budgetary resources and the pursuit of new investments while remaining committed to fiscal prudence.

It will comprise, amongst others, of the following:

Increased support for entrepreneurship and employment opportunities for youth and women, as well as small and medium businesses.

Ensure that procurement focuses on localization

Training for unemployed young South Africans with the skills necessary to compete in a rapidly-changing economy.

As deployees of the ANC in government, we have committed that the work to develop this stimulus should start now to ignite growth, tackle unemployment and mitigate the effects of the rising cost of living.

We call on all South Africans to work with us in developing a social compact for economic inclusion, economic growth, and jobs for all.

The proposed constitutional amendment by the ruling ANC was believed to be part of ongoing efforts to grant the blacks more access to land in the country- a significant promise of the party when it assumed power in 1994.

The land has been a very controversial issue in South Africa as it is often interpreted through political lenses. Historically, the Natives Land Act of 1913 barred black people from buying or renting land in “White South Africa” during the colonial era, a situation which isolated blacks from the acquisition and even use of land.

In 1994, the country went to polls to for its first democratically elected government after the failure of the apartheid. This led to the emergence of ANC, which rode to power on a groundswell of addressing the situation by introducing land reforms, especially to enable blacks to have more access to land.

ANC had promised that by 2014, 30% of white-owned agricultural lands would have been redistributed to black farmers but only 10% has been transferred so far, according to a BBC Reality Check Team’s report.

Government reports indicate White farmers who are only a pocket of South African population with 9% have a large control of agricultural farms, a development the blacks are kicking against.

The bone of contention in the country, therefore, remains why the government should propose a constitutional amendment seeking to redistribute land without compensation. President Ramaphosa had in the televised broadcast said the existing constitution in the country granted power to the government to redistribute land without compensation, contending that what was required was to make the “Constitution more explicit.”

A similar push for constitutional land reform occurred in 2016 when the country’s parliament supported a bill which granted government the power to expropriate land when it is in the interest of the public, but that demands payment of value approved by a government adjudicator.

Observers are of the view that the ongoing move by ACN was borne out of mounting pressure on the party to walk its talk on land reforms. ACN was mainly formed to champion the emancipation of the blacks in South Africa and issues affecting them, especially redistribution of land, but critics alleged the movement’s primary objective has been compromised.

Why the controversies may not end

The controversies trailing the land reforms in South Africa were as a result of many factors. One of such is the fear of the unknown among white-farmers. Many of the white-farmers are wary of being caught up in a similar situation with white-farmers in neighboring Zimbabwe. Robert Mugabe’s land reforms strip most whites of their control of land ownership, drawing widespread condemnation, and this has also been a concern over the proposed land reform.

Another reason why the ongoing controversies over the proposed land reforms may not end is the divergence of interests among parties involved. South Africa is a conglomerate of whites and blacks and issues of land have so far been interpreted along these lines. Observers believe President Trump’s recent statement could be an attempt to protect whites’ interests.

Trump’s terse statement on the ongoing debate over the proposed constitutional amendment that would “explicitly” approve government ability to redistribute land without compensation may have been widely criticized due to its timing, but beyond the specks of dust generated, the controversies would continue to linger, except the underlying issue raised by the move is critically addressed.