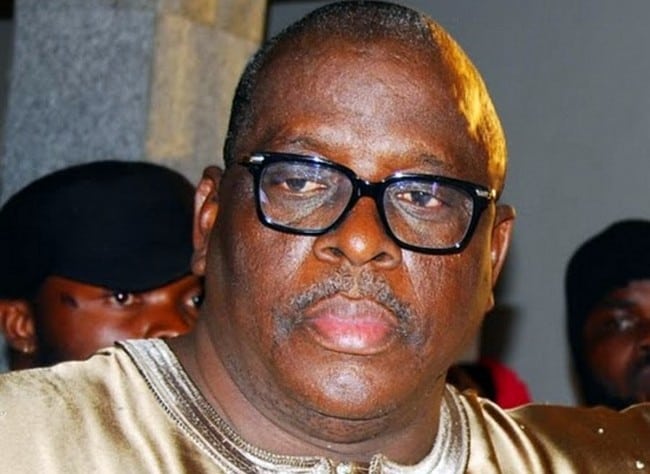 Embattled Nigerian Senator representing Ogun South at the National Assembly, Kashamu Buruji is alleged to be weighing up moving to the ruling All Progressives Congress (APC) from the Peoples Democratic Party (PDP) to escape extradition to the US.

The Alleged drug kingpin has been on Federal Government’s radar over the extradition request made by US government. Kashamu is wanted by the US for drug-related charges, charges he has vehemently denied.

The Ogun South Senator is also at loggerheads with the leadership of PDP, his party. He was recently expelled from the party over what they described as anti-party activities in Ogun state.

A recent finding by CARACAL REPORTS gathered that the leadership of the ruling APC has moved to take advantage of the situation to woo the stalwart into their party in a bid to strengthens itself ahead of the 2019 elections. The party leadership, it was gathered, is secretly wooing the embattled senator on his possible defection to APC.

A reliable source in the party confided in our correspondent that the party’s leadership had given the assignment to the leadership of Ogun state chapter of the party.

According to him, Kashamu is considered to be one of the significant threats to PDP leadership that will help APC to dislodge PDP in Ogun state.

“As it is anything may happen. Both parties are ready to go with any available option that will help them to come back in 2019. In Ogun state, Senator Kashamu is another bigwig that people respect despite his case with the U.S., and as it is, APC is ready to take advantage of the fact that PDP is in a feud with him (Kashamu). Already, the secret plan is ongoing, and I am aware that Ogun state chapter of APC has been contacted to reach him for possible defection. Moreover, if this happens, we all know that it will be a big threat for PDP to come back in 2019”, the source said.

Meanwhile, it was learned that the embattled senator might also be used against former president Olusegun Obasanjo who is already bracing up to take over the state with his party, African Democratic Party, ADP.

Obasanjo has been an archenemy to Kashamu. Kashamu recently blamed Obasanjo as the instigator of his extradition travails with US government.

A stalwart of APC from Ijebu South Senatorial District, Chief Sikiru Akinola told our correspondent that inclusion of Kashamu in the party would be an additional power to silence the opposition both at Federal and state level, adding that Kashamu’s travail does not have to do with his political life.

“Kashamu’s inclusion in APC will be an additional strength. If the speculation finally becomes a reality, then, I can assure you that opposition will be silence totally both here in Ogun and national level”, Sikiru said.

The Ogun state chapter of APC, when contacted on the development, said it was unaware of the event. It added that the national leadership of the party has not communicated such development.

Mr. Wole Elegbede, the Publicity Secretary of the party in Ogun state, told our correspondent that: “I am yet to be aware of the development, but you can contact our chairman for better clarification.”

Efforts to contact the PDP chairman in Ogun state, Chief Derin Adebiyi, were not successful as his mobile phone was not reachable as at press time.

The media aide to Senator Kashamu, Mr. Austine Oniypkor, however, told our correspondent that the senator is still an authentic member of PDP despite the pronounced expulsion by the party’s leadership.

Austine said his office was not aware of any synergy between APC and his boss.

“Senator Kashamu is still a member of PDP. I am not aware of any talk with APC”, Austine said.