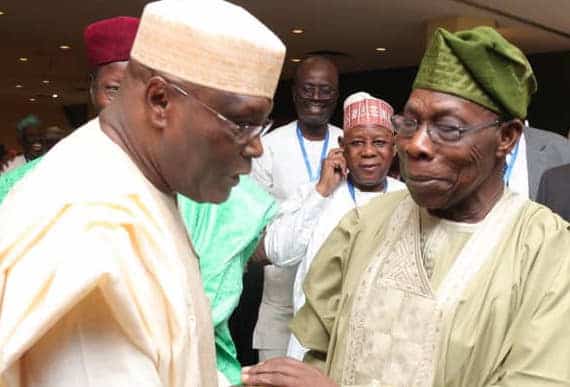 The erstwhile president threw his weight behind Atiku’s quest to clinch the nation’s highest political office in 2019 during a courtesy visit paid to his Abeokuta home, in the southern part of the country, by the PDP’s presidential candidate accompanied by prominent figures in the country.

Speaking during the visit, Obasanjo stated that his decision to forgive his former deputy was based on his conviction that the PDP presidential candidate has turned a new leaf, adding that he (Atiku) “has re-discovered and re-positioned himself.”

The former President stated that he remains confident that Atiku has all it takes to perform better than incumbent President Muhammadu Buhari, based on his many years of experience across politics and other areas of life.

Obasanjo’s recent position is coming barely weeks after he vowed not to forgive Atiku or support his presidential ambition. The former President had earlier in August quashed claims of supporting Atiku. “How can I be on the same side with Atiku? … If I support Atiku for anything, God will not forgive me. If I do not know, yes. But once I know, Atiku can never enjoy my support,” he had been quoted as saying.

Abubakar served as Obasanjo’s deputy between 1999 and 2007. There has been no love lost between the two leaders since 2007 when a rift broke out between them. Obasanjo, then the President had accused Atiku of planning to take over power from him as he was indicted for corruption.

The recent development will be seen as a boost to Atiku’s 2019 ambition to defeat incumbent President Buhari. Foremost politicians in the country had on several occasions advised Atiku to bury the hatchet with his former boss, if he is to be sure of victory at the polls. Former President Goodluck Jonathan had in 2017 urged Atiku to reconcile with Obasanjo, whom he described as “the boss of all bosses.”

He had said: “He (Atiku) can’t get the APC ticket. If Atiku gets our party (PDP) ticket, he will compete well,” Jonathan reportedly said. He’s always a passionate politician. But he would have to reach out to our boss, Baba OBJ, the boss of all bosses.

“We’ve all learned at different times that you ignore OBJ at your own peril. OBJ has the magic wand, respected at home and abroad.”