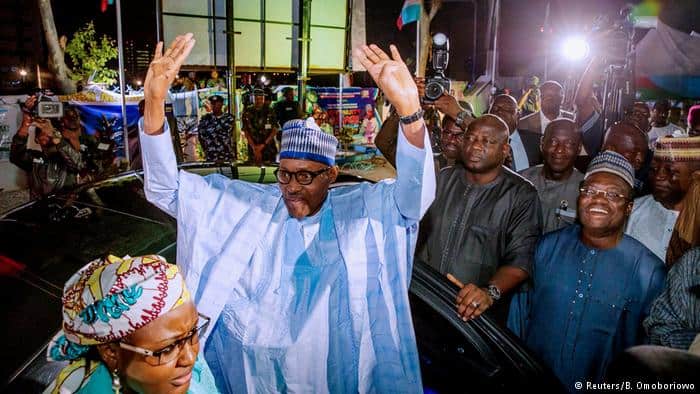 According to the election results released by the commission, Buhari of the ruling All Progressives Congress (APC) polled a total of 15, 191, 847 votes to defeat his major opposition, erstwhile Vice- President Atiku Abubakar of the Peoples Democratic Party (PDP) who polled 11, 262, 978 votes.

“I, Professor Mahmood Yakubu hereby certify that I was the returning officer for the election held on the 23rd of February, 2019,” the Chairman of the electoral commission had said while declaring the winner of the election.

He had added: “That Muhammadu Buhari having satisfied the requirements of the law, having scored the highest number of votes is hereby returned elected.”

The Chairman further stated that a Certificate of Return would be issued to the winners later today, at 2 p.m. President Buhari’s victory means he would pilot the affairs of Africa’s most populated country again for the next four years.

The incumbent President came to power in 2015 having ousted President Goodluck Jonathan to end PDP’s 16-year grip on power since 1999.

Meanwhile, President Buhari’s victory is coming against the backdrop of rising claims of electoral malpractices by the opposition. PDP’s flagbearer, Atiku had in a statement issued on Wednesday morning, shortly after Buhari was declared a winner by INEC, vehemently rejected the election results, alleging inflation of statistics, especially in crisis-ravaged regions of the country.

Making a case for his allegations, the former Vice-President questioned why votes from crisis-riddled areas of the country should surpass those of peaceful regions, adding that there were also cases of intimidation of members of his party in major strongholds.

The statement reads: “The suppressed votes in my strongholds are so apparent and amateurish, that I am ashamed as a Nigerian that such could be allowed to happen. How can total votes in Akwa-Ibom, for instance, be 50 percent less than what they were in 2015? “Another glaring anomaly is the disruption of voting in strongholds of the PDP in Lagos, Akwa-Ibom, Rivers, and diverse other states, with the authorities doing little or nothing and in some cases facilitating these unfortunate situations.”

“I am a democrat and there are democratic avenues available to present the truth to the nation and the watching world. Already, many international observers have given their verdicts, which corroborate our observations.

“I am sure more will come in the coming hours and days.

“If I had lost in a free and fair election, I would have called the victor within seconds of my being aware of his victory to offer not just my congratulations, but my services to help unite Nigeria by being a bridge between the North and the South. “However, in my democratic struggles for the past three decades, I have never seen our democracy so debased as it was on Saturday, Feb. 23.

“The Year 2007 was a challenge, but President Yar’Adua was remorseful. In 2019, it is sad to see those who trampled on democracy thumping their noses down on the Nigerian people.

“Consequently, I hereby reject the result of the Feb. 23, 2019 sham election and will be challenging it in court.

“I hope and pray Nigerians will someday summon the courage to defend democracy. That is the only way we can move away from being the world headquarters for extreme poverty.”

For many, the President’s victory at the polls means he would have to work frantically to justify the trust reposed in him. Critics have consistently slammed the President for failing woefully in delivering on major areas of his campaign promises in 2015 that brought him to power.

President Buhari, during his 2015 campaign had promised to exterminate corruption, which is a major problem in the country, alongside insecurity issues as well as revamping of the economy.

But many are of the view that the President did not perform well on the three issues identified as key priorities of his administration. Whether or not the President will meet the rising expectations that greeted his second term victory remains unseen, but many believe his overall performance will determine the chances of the ruling APC in future elections.