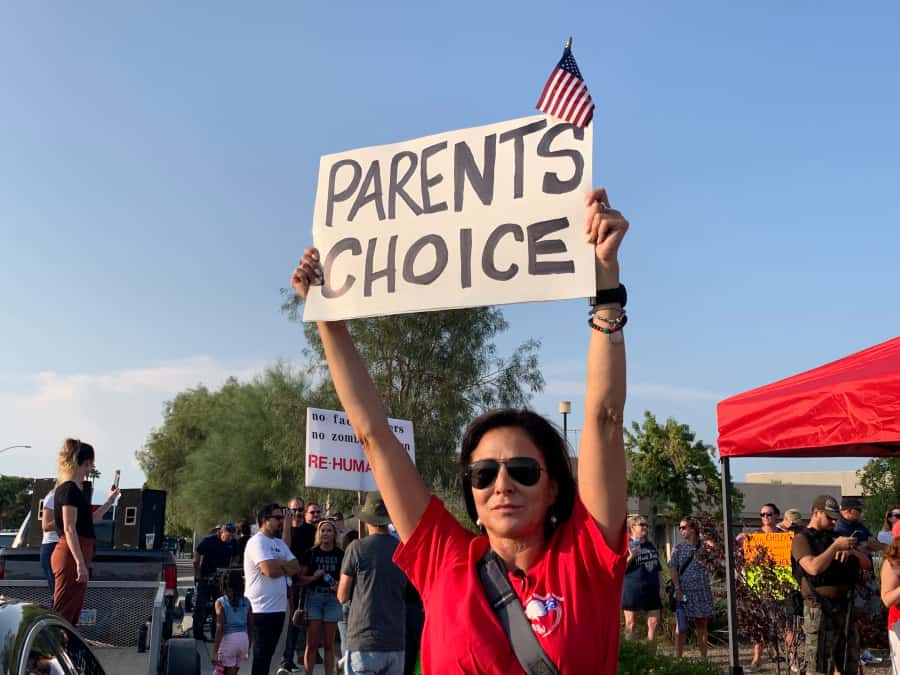 In the United States, the concept of mask mandate was met with acceptance or anxiety, depending on which parts of the country believed in the direction of medical professionals or the opinions of elected officials.

Different masking and mitigation policies designed to “stop the spread” in states led to varying degrees of coronavirus infections at the start of the pandemic and have continued.

For instance, the controversial approach of Florida Gov. Ron DeSantis, rumored to be a possible contender for the Republican nomination in 2024, has given Florida the distinction of being one of the top three states with the highest number of COVID-19 infections in the United States, according to Statista.

DeSantis had issued an executive order forbidding Florida’s 67 school districts from implementing mask mandates, yet schools in the state’s second-largest district defied the governor’s order against the threat of financial sanctions.

Mixed reactions in a purple state

In Pennsylvania, a school board member had resigned in frustration over masking policies. John Gamble, who was vice president of the Central Bucks School District outside Philadelphia, said the issues of masking had “broken” the community, according to the Bucks County Courier Times.

The article had stated that Gamble had been receiving harassment and potential death threats over how he was going to vote on masking. “COVID has broken you people, and it’s disgusting. Common decency; you all need to find it real fast,” he said.

Originally, Democratic Gov. Tom Wolf said he was going to allow school districts the option to make their own decisions whether to enact mask policies, but reversed course on Aug. 1, citing concerns of the Delta variant of the coronavirus and misinformation in the news media, which has triggered extremist views and activities from many parents on both sides of the argument.

“I preferred for local school boards to make this decision. Unfortunately, an aggressive nationwide campaign is spreading misinformation about mask-wearing and pressuring and intimidating school districts to reject mask policies that will keep kids safe and in school,” Wolf said in his statement mandating masks in school classrooms.

In Detroit, Michigan, one of the most economically depressed school districts in the country, still require students and faculty to wear masks but has implemented weekly COVID-19 testing for all as an ongoing preventative measure, especially now that the school district is back to pre-pandemic enrollment.

Some sources were saying Pa.’s governor essentially was forced to backtrack on his original plan to allow all 500 school districts the autonomy to make their own decisions regarding masking.

“As we see cases among children increase in Pa. and throughout the country, this is especially dangerous and challenging as we seek to keep kids in school and maintain a safe and healthy learning environment,” the statement from the Pa. governor continued.

Things continue to be divisive in Pa. and most other states over the issue of wearing masks in schools.

Philadelphia, a mostly liberal enclave where masking is still part of daily life, is in stark contrast to Northcentral Pa. The idea of students being masked has been a hot-button issue among parents.

The Loyalsock Township School District in Lycoming County became the only school district in Pa.’s largest county to institute a mask order on Aug. 26, which was followed not long after by the statewide mandate backed by Wolf and his Department of Health. The mask mandate in Pa. went into effect on Tues., Sept 7.

In the neighboring Montoursville School District, a protest composed mostly of adults took place the day the statewide order took effect. Loyalsock and Montoursville were two of many school districts which had tedious and difficult school board meetings as the first day of school was arriving over the issue of masking.

Down the road in the Eastern Lycoming County School District, a parent became petrified when she called the school office to reach her son.

“All I heard was chaos and police walkies,” said Amanda Waldman.

Waldman, who ran for state representative in 2020 and has committed to doing so in 2022, said she had heard a similar protest was planned that day at her son’s school.

“They were also planning on taking zip ties and tying up the principal,” Waldman mentioned. In Arizona, three men were arrested after they stormed into the office of their children’s principal and threatened to zip tie and place her under citizen’s arrest.

Waldman had said the school’s principal, Tom Coburn, ended up having police guards present at the school.

“None of the parents were notified,” Waldman said about the ensuing chaos inside her son’s school during the day.

“The nurses’ office was overrun with sick kids as well. No contact tracing was done yet. One of the health teachers said if [her son] was wearing a mask, he wouldn’t get sick,” she said about the science behind masks.

A study was released on Aug. 1 by Yale University, Stanford Medical School, the University of California at Berkeley, and the nonprofit Innovations for Poverty Action (IPA) proved conclusively that masks are effective at reducing the spread of viral infection.

According to the University of California at Berkeley, the study was the largest of its kind, carried out among more than 340,000 people in 600 Bangladesh communities, and was the first randomized trial that examined the effectiveness of face masks in a real-world setting.

The study carried out by the four institutions showed a reduction in the spread of COVID-19 based on their symptom reporting.

The article by UC Berkeley quoted Laura Kwong, an assistant professor of environmental health sciences at Berkeley’s School of Public Health. “These results suggest that we could prevent unnecessary death and disease if we get people to wear high-performance masks, such as surgical masks, in schools, workplaces, shopping centers, places of worship and other indoor spaces.”

In the article, it was mentioned a good way for mask-wearing to be seen as normal would be for leaders on both sides of the political aisle to wear masks in order to set an example.

During the 2020 election, then-president Donald Trump notably was anti-mask, which set the political tone for the argument against masking.

Mask orders had been a focus during the last presidential election, as many thought Joe Biden was planning to institute a national mask order, which he did not. During the vice-presidential debates, then-Sen. Kamala Harris was asked what a Biden administration would do on masking.

“It will be a standard,” answered the current vice president.

Kwong mentioned in the article that “While a few individuals have refused to follow mask mandates or violently opposed individuals who remind them that they are required to wear a mask, mask mandates have been able to substantially increase mask-wearing in many locations.”