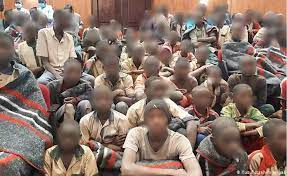 After spending six months in the captivity of bandits, 30 abducted students of Federal Government College, Birnin Yauri in Kebbi State and a teacher have been set free.

This was announced by Yahaya Sarki, the Special Adviser on Media to Kebbi State Governor Atiku Bagudu, on Saturday.

The students were kidnapped by the bandits on June 17, 2021. Their abduction led to the death of a police officer.

Two of the students were freed two weeks after while an undisclosed number of them remained in captivity.

Read Also: Nigeria Truly United, Nothing Can Make It Break Up —Osinbajo

However, the governor’s aide said 30 of the students had been freed but would undergo medical screening before they would be handed over to their respective families.

“They shall undergo medical screening and support while being reunited with their families.”

Saraki appreciated “all security agencies and those who have helped in securing the release, while congratulating Mr President, Muhammadu Buhari, for the success.”

Kebbi and other North-West have continued to suffer bandits attacks in recent years. Many people have been killed or Kidnapped while properties worth millions of Naira have been destroyed.