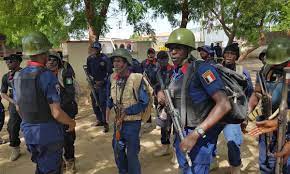 He stated that three suspects, Kabir Junaidu, Mohammed Hamza, and Yahaya Yunusan, all inhabitants of Dabai’s Gidan Mai-Unguwa village in Danja Local Government Area (LGA), had been apprehended for vandalizing a transformer cable.

Abdara went on to say that the other two suspects, Sama’ila Namadi and Nura Abdulaziz, were Filin pipes residents in Katsina Metropolis.

“The suspects were arrested on July 12, 2022 by a combined team of NSCDC personnel, vigilantes and community security committee members while attempting to vandalise an electricity transformer at Filin shooting, along Kahutu Road in Dabai.
“Junaidu, who is the prime suspect, was arrested for cutting the electricity dropper cable. He confessed to the offence and also mentioned two other suspects.’’
According to Junaidu, the two other suspects were supposed to be with him to commit the crime.
“They decided not to participate in the vandalism, but assisted him with a saw blade to execute his mission.
“Both of them confessed to have committed the same crime at the same transformer spot in 2021, from where they stole 13 kilogrammes of cable which they sold for N39, 000 in Lokoja, Kogi.

“Presently, we are liaising with our colleagues in Lokoja to trace and arrest the buyer, one Alkasim, alias ‘Sai Oga,” Abdara said.

He stated that the individuals were charged with different criminal actions in the vicinity.

He stated that preparations had been made to charge them in court.

The spokeswoman for the Command further stated that the two phone snatchers had been charged in court.

He did, however, state that the court remanded them to the NSCDC for further investigation.

The leadership, according to Abdara, would not cease in its efforts to combat criminals and criminalities in the state.