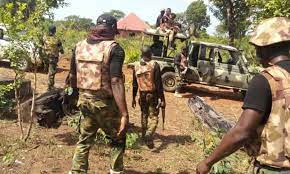 Onyeuko claimed that on July 29, troops conducted a clearance operation in Tse-Ibor, Tse-Igbakyor, Akwana, and Ayinbe villages in Nasarawa State’s Logo Local Government Area and made contact with terrorists.

According to him, forces fought the terrorists with superior weaponry, causing them to flee, while two of them, Usman Yau (28) and Danladi Selfa (23), were apprehended at a private hospital with bullet wounds.

One AK-47 rifle and one magazine with 13 rounds of 7.62mm special ammunition, among other things, were discovered, according to Onyeuko.

He said troops also arrested one terrorist and alleged bandit collaborator, Mr. Moses Aindigh (27), and a notorious kidnapper, IIiyasu Mohammed (37), on the same day at Kukyro village in Nasarawa Local Government Area, adding that all arrested criminals have been handed over to relevant authorities.

“The suspects confessed to having been involved in kidnapping activities in the mentioned local government areas.”

“Also, on August 3, troops responded to a distress call from locals in Qua’anpan Local Government Area Plateau of four kidnappers in a hotel hideout attempting to move people away.

“Troops mobilized to the scene engaged the criminals, neutralized one of them (Umar Muhammed) and recovered one AK47 rifle, ten rounds of 7.62mm special, amongst other items.”

He stated that the rescued citizens were reunited with their families.