Why is Devin Nunes Still Leading the Trump-Russia Investigation? 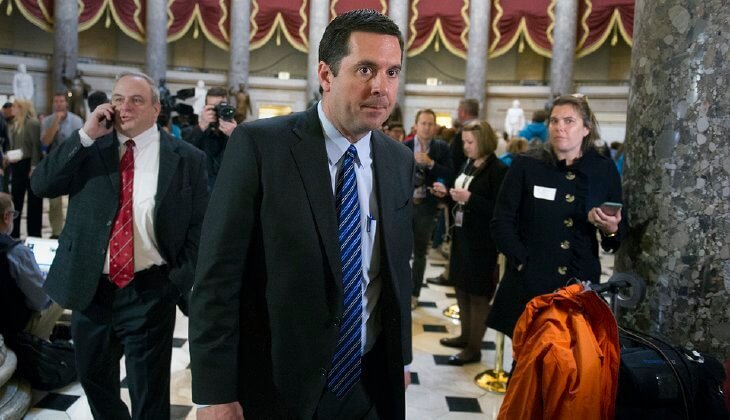 There is mounting bipartisan outcry that House Intelligence Committee Chair, Devin Nunes (R-Ca.), should not be leading the investigation into connections between the Trump campaign and transition team and the Russian Government during the 2016 presidential election.

Nunes’ spokesperson Jack Langer confirmed the meeting at the White House, putting out a statement:

“Chairman Nunes met with his source at the White House grounds in order to have proximity to a secure location where he could view the information provided by the source. The Chairman is extremely concerned by the possible improper unmasking of names of U.S. citizens, and he began looking into this issue even before President Trump tweeted his assertion that the White House had been wiretapped.”

This explanation did not convince lawmakers, particularly Democrats.

On Monday, Minority Leader Chuck Schumer (D-NY.) called for Nunes to step down, suggesting Speaker of the House Paul Ryan (R-Wi.) as his replacement.

Schumer continued, observing that Nunes’ actions seemed more to be about preserving the interests of the President than being impartial.

“Chairman Nunes is falling down on the job and seems to be more interested in protecting the president than in seeking the truth. You cannot have the person in charge of an impartial investigation be partial to one side. It’s an inherent contradiction,” Schumer added.

Other Democrats, like Vice-President Joe Biden, House Minority Leader Nancy Pelosi (D-Ca.), and House Committee Ranking Leader Adam Schiff (D-Ca.), among others, have called for an independent counsel to look into the connections between the Trump Campaign and Russians.

Schiff also requested that Nunes recuse himself from the investigation, not only because of recent events but also because he was a member of the Trump transition team. This marks a critical divide between Schiff and Nunes, who have worked closely on this investigation.

At Monday’s Press Briefing, Press Secretary Sean Spicer defended Nunes’ actions, insisting that the Intelligence Committee had been “open” with the press about his sources and that he was just doing his job.

“You can’t ask someone to do a review of the situation and then sort of create inferences that because they’re reviewing a situation that there’s something, you know, that’s not right about that,” Spicer said. “He is reviewing a situation. He did exactly what—and I think he’s been fairly open with the press as far as what he was doing, who he spoke to and why.”

With Republicans controlling the White House, Congress, and Senate, it’s very unlikely that Nunes would be ousted and replaced by anyone as Committee Chairman.