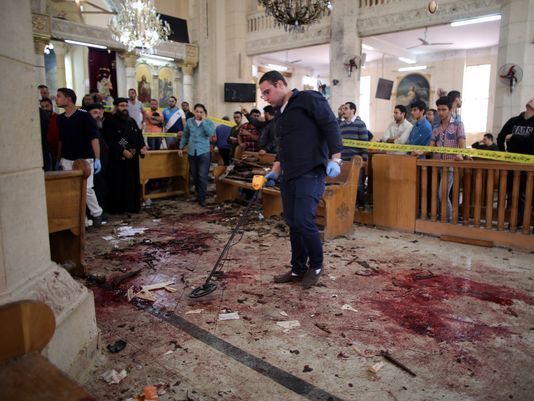 Christians in Egypt are furious at a state they believe can no longer protect them after the devastating twin church bombings on Palm Sunday a week before Easter when Christians celebrate the triumphant arrival of Jesus in Jerusalem.

Christians wept with rage on Monday as they recovered the bodies of their loved ones killed in the church bombings. Some appeared in total shock, their faces pale and unmoving, others wept openly as women wailed in mourning.
Attacks on two Coptic orthodox churches on Sunday left at least 44 persons killed and injured more than 100 others during Palm Sunday services—including the one where Pope Tawadros II was worshiping.

The Associated Press reports that Pope Francis, who is scheduled to visit Egypt later this month, condemned the attack during his Palm Sunday remarks in St. Peter’s Square. He prayed that God would “convert the hearts of those who spread terror, violence and death, and also the hearts of those who make, and traffic in, weapons.”
At Tanta University hospital morgue, desperate families were trying to get inside to search for loved ones. Security forces held them back to stop overcrowding, enraging the crowd.

“Why are you preventing us from entering now? Where were you when all this happened?” shouted one women looking for a relative.

Some appeared in total shock, their faces pale and unmoving. Others wept openly as women wailed in mourning.

A middle-aged man who had just stepped out of the morgue after seeing his dead brother stood with his face buried in his hands weeping.

“You sons of bitches,” he shouted as his family tried to calm him, according to Reuters.

Young Coptic Christians were already digging graves in the basement of the devastated St. George Church in the northern Nile Delta city, where the first of the bombs exploded, killing 27 and wounding around 80.

Copts make up about 10 per cent of Egypt’s 92 million people, the largest Christian minority in the Middle East.