United Airlines Incident is a Tragedy and Public Relations Disaster 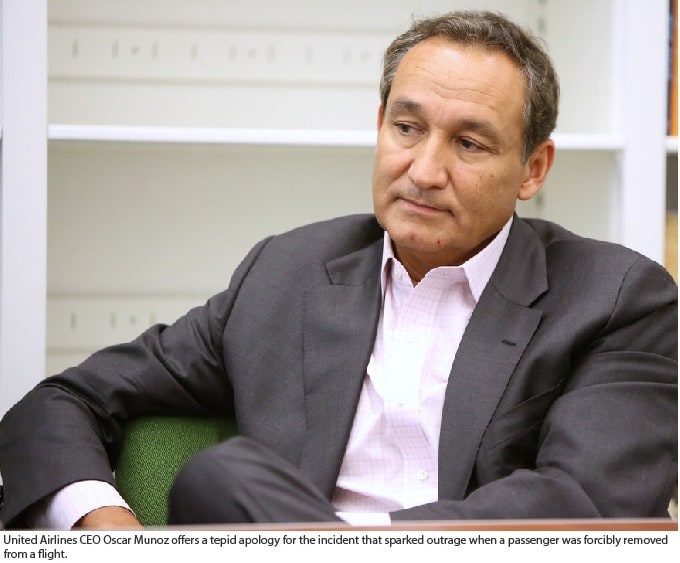 Not only was the dragging of Dr. David Dao off an overbooked United Airlines flight a gruesome scene, but it was also an absolute disaster for the company’s brand, resulting in the loss of over a billion dollars worth of stock in the days following the video going viral.

The incident began when a United Airlines flight from Chicago to Louisville, Kentucky didn’t have enough room to fit airline staff. When Dr. Dao refused to relinquish his seat to the crew members, security was brought in as they violently wrenched and dragged him down the aisle.

The forcible removal was captured on the other passengers’ phones and once it went viral United’s stocks started plummeting as much as 6.3% in pre-market trading, dropping $1.4 billion from the now $21 billion company by market cap, according to Fortune.

Making matters worse, the CEO Oscar Munoz’s immediate response to the incident came across as tone deaf and muted, not addressing the violence or the procedures that allowed the incident to happen.

“This is an upsetting event to all of us here at United,” United CEO Oscar Munoz said in a statement Monday.

“I apologize for having to re-accommodate these customers. Our team is moving with a sense of urgency to work with the authorities and conduct our own detailed review of what happened. We are also reaching out to this passenger to talk directly to him and further address and resolve this situation.”

He later gave a more thought-out and heartfelt apology, even going as far as to say he felt “shame”, but the damage had already been done, and it could take years for the airline to fully recover.

From a report on Market Watch:

Based on interviews with 4,800 people per day, the YouGov BrandIndex score ranges from minus 100 to 100 with a zero score equaling a neutral position. United Airlines’ UAL, -1.23%  score was 3 on April 8, a relatively benign score before the videos of the man being dragged from his seat by airport police at Chicago’s O’Hare International Airport with a bloodied face was posted. As of April 14, the score was minus 40

United’s poor image as a company is not good news, and unfortunately for them, similar PR disasters for Delta have taken a long time to bounce back. This, however, is not as bad as the PR disaster that was the BP oil spill, which cost the company tens of millions of dollars.

What makes matters worse is that Dao could file a lawsuit against the airline, which a trial attorney said could be settled out of court by the airline for any amount.

“In an instance like this, it would be beyond insanity to do anything more than bring [Dao] into a conference room and basically say there’s a check on the desk, it’s signed, just fill in the amount,” said New York trial attorney Randy Zelin.

Given all the negative PR surrounding the gruesome incident already, it would be best for United to settle quietly out of court and reexamine the procedures for overbooked flights.