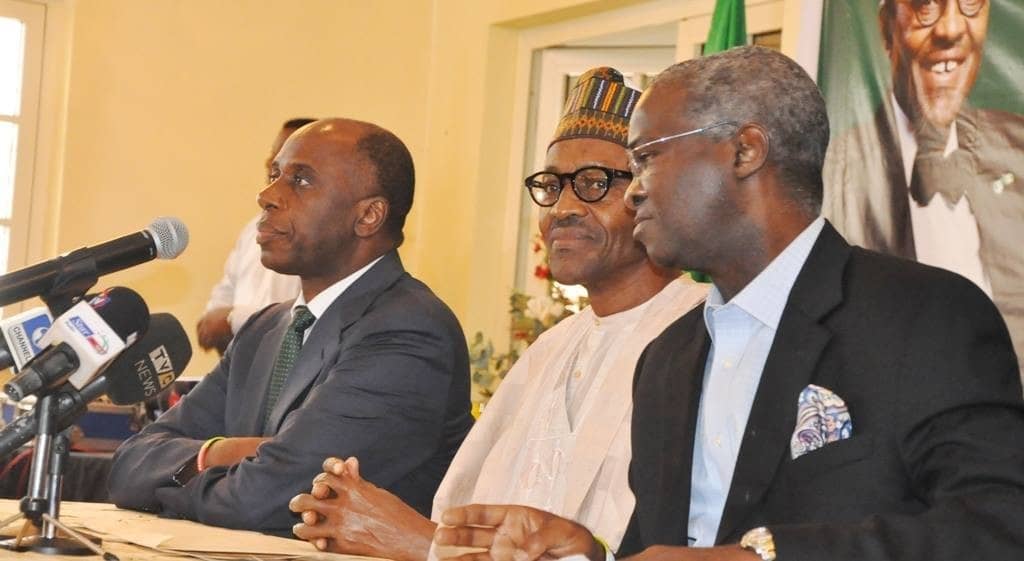 This article has been updated to include a full copy of the White Paper discussed here for review.

Caracal Reports’ investigators were able to gain access, through anonymous government sources at the Justice Department, to the White Paper published by the Judicial Committee of Inquiry, wherein they reveal fraudulence, collusion, wastage of public funds, and avoidance of due process. The names of sources of the documents are kept anonymous for confidentiality. The details of these findings by Caracal Reports are reported herein.

The Investigation of the Administration of Governor Chibuike Rotimi Amaechi

Those who have been shouting themselves hoarse that Buhari’s anti-corruption stance and style are selective and vindictive may have a point after all. Indeed the war against corruption is proving more selective and skewed in favor of APC party men and it increasingly appears to be a way to stalk and stifle opposition.

The view is upheld as many in Buhari’s cabinet are among those suspected to have looted the Nigerian government treasuries. Hon Chibuike Rotimi Amaechi, twice elected Governor of Rivers State (2007- 2015) and now the Federal Minister for Transport and Aviation has been indicted by Justice George Otakpo Omereji headed Judicial Commission of Inquiry into his tenure.

Ostensibly Amaechi promised heaven to the people of Rivers State but delivered hell and showed a significant amount of abuse of office and trust. After eight years as Governor, every promise he made to the people ended as a ruse; from the monorail project to the provision and sale of Gas Turbines, to the provision of Agricultural Credit Guarantee Scheme, to Co-operative societies, amongst the many other promises of his governance.

When the current Governor of Rivers State, Barrister Nyesom Ezenwo Wike ordered his investigations upon the assumption of office in 2015, many felt that it was a witch hunt because of the fallout of their sour relationship. The popular conclusion was that Wike was out to get back at Amaechi and presumably block his chances and confirmation as a Minister. The findings of the Judicial Inquiry in October 2015 revealed many wrongdoings, a multitude of fraudulent and clandestine financial deal approvals, wastage of public funds, collusion with dubious characters and avoidance of due process.

On 18th June 2015, a panel of inquiry was called upon to investigate the administration of Rotimi Amaechi with respect to the sale of valued assets of Rivers State and other related matters. The terms of reference of the Commission had 22 items and were expected to make appropriate recommendations, which were to be delivered to Government by 7th of October 2015, which the Commission did.

The commission for the investigation comprised of the Chairman, Hon Justice George Otakpo Omereji had six other members. The issues to be examined were weighty; the recovery of the proceeds of the sale of the Omoku 150 Mega Watts Gas Turbine, Afam 360 Mega Watts Gas Turbine, Trans Amadi 136 Mega Watts Turbine and Eleme 75 Mega Watts Gas Turbine; all of which served as a front for what the Government describes in its WHITE PAPER as fraudulent transaction. The value of the transaction, which was $432,800,000:00,70 was sold on 15th and 16th August 2012 to NG Power-HPS Limited, a company which was but a subsidiary of Sahara Energy Resources Limited, one of whose Directors, Mr Tony Cole, merely .

NG Power-HPS was expected to have remitted under the sales contract the sum of $116,552,042:46. However, having not done so, the office of the Attorney General was mandated to utilize the appropriate machinery for the recovery of the sums of money. What rankled the Government was that in these transactions that lacked transparency, the provisions of the Public Procurement Law No 4 of 2008 were not complied with and were flagrantly violated.

The sale of the Olympia Hotel was a ridiculous transaction and did not follow global best practices. The Hotel was concessioner to Centropsaroten Hotel Management Limited for 40 years at the fee of $1,000,000,000.00 or N155,750,000.00. When the rent is added, the concession value for 40 years comes to $3,450,000.00. The Commission found, and the Government accepted, that the $86,250.00 annual rent did not follow protocol. The Government, therefore, called for a review of the entire transaction agreement.

The most bungled of all the projects by the Amaechi administration was its Monorail project which would have served as its signature service for the over 10 million residents in Port Harcourt and its environs.

An investment of a whopping N35,108,316,295.65, out of which N11,000,00,000:00 was paid to the Rivers State Monorail Company Limited. This company is an entity solely managed by TSI Limited and represented by Brigadier Anthony Ukpo (rtd),(yet another single individual). However, the project stands today like a scarecrow–ugly, unfinished and may never be touched. If we look to the Lagos monorail project of 30 years ago, which the then Military Head of State, General Buhari ordered stopped, we see similarities. It is only now, 30 years after that project ended, that it is about to be resuscitated.

In a phony arrangement, ARCUS GIBB LIMITED was to provide Engineering Project Consultancy service and was made to manage the entire project on behalf of the Rivers State Government when TSI defaulted. In addition, Arcus Gibb was to administer the N22.9billion for the Monorail construction for which she was paid the stupendous consultancy fee of N696,300,000:00.

In a White Paper on the report, Governor Wike is recommending that the total sum invested be recovered from Brigadier General Anthony Ukpo, former Governor Rotimi Amaechi and George Tolofari for being in the words of the Government’s position, the masterminds behind the failed Monorail project.

What was most bizarre was that a Justice Adolphus Karii-Whyte Specialist Hospital conceived to address the health issues of Rivers State citizens and planned to be a Public-Private Partnership project awarded to Clinotech Diagnostic and Pharmaceutical Inc. Canada and had received a 20% mobilization fee of N4,340,743,574 which was an excess payment of N272,130,631:51. Painfully no substantial work was done at the time of the inquiry.

The Government White Paper then in its recommendation was asking the Office of the Attorney General and Commissioner for Justice to seek recovery of any sum of money due to the Rivers State Government. The fraud and oddity in the entire plan were that Clinotech Diagnostic and Pharmaceutical Inc. Canada defaulted in the payment of 60% equity contribution while retaining the money paid to the Special Purpose Vehicle by the Government of Rivers State.

The most scandalous of all the actions of former Governor Rotimi Amaechi was the fraudulent withdrawal of billions from the State’s Reserve Fund, which was intended to create a State’s resource buffer. It was agreed that in every month, the State would make a mandatory One billion naira contribution into the Reserve Fund which by the State’s Fund Law No 2 of 2008 had grown to N38,532,137,993.32k and through prudent advice by professional parties had risen to about N55 billion in 2014. Such a fund no doubt could have set Rivers State on the way to any Middle East medium income status.

But what did Amaechi do? On 13-02-2014, in a reckless manner, the Rivers State House of Assembly, in collusion with the Executive opted to remove the clause ” IN EMERGENCY” as a precondition for withdrawal from the Fund.

Thus, between February 2014 and January 2015, the Executive had drawn N53,936,000,000 from the Fund, leaving a balance of N1,276,389,208:70, despite the resistance of First Trustees who were the custodians of the Fund. The First Trustees, however, succeeded in frustrating Chibuike Amaechi drawing out the last billion, by insisting on due process under the Law.

However, at a time when N30 billion was withdrawn from the Fund, it was a most illegal and unlawful act as there was no Reserved Fund (Amendment) Law in existence at the time of the House of Assembly’s approval.

Buhari’s Campaign And The $50Million In Ikoyi Lagos Apartment

A question worth asking is, to what purposes were all these monies? In hindsight, we now know better. Amaechi’s looted money was part of what funded Buhari’s campaign. The money secured Amaechi a belt in the Buhari Cabinet.

On April 13, 2017, the EFCC raided No 16 Osborne Road in Ikoyi, Lagos and discovered a pile of $50 million in cash stored in the closets of a house allegedly owned by a former PDP Chairman, Alhaji Mu’azu with flats 7a and 7b rented by Amaechi. This residence is where the said cash trove was found. The location is also where the billions stolen from the Rivers Treasury may have been hidden among other hideouts. As if on cue and confirmed true, Governor Wike of Rivers State is calling on the Federal Government to return the “discovered” monies in Flat 7b at Osborne Road to Rivers State. 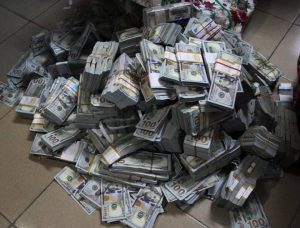 Perhaps the most obscene of all the perfidy in the ‘ manhandling” of the Treasury, was the issue of Agriculture Credit Guarantee Scheme accessed by the State Government of Rivers State in June 2014 for the sum of N4billion meant for onward lending to GENUINE FARMERS in the State.

Instead of the proper thing to do, N3 billion was made out as grants to 380 spurious Co-operatives, 38 of whom were unregistered. Of the 380, 342 Co-operative Societies were hurriedly registered in the month of February 2014 specifically for the fraudulent loan disbursements. It was shocking to note that the officers of the Co-operatives were mostly Chairmen of Local Government areas and other persons, in the words of the White Paper WHO WERE NEITHER FARMERS NOR INVOLVED IN ANY AGRICULTURAL BUSINESS OR ACTIVITY.

It is clear that the eight years of  Rotimi Amaechi was just one endless scam on the people. For years, Amaechi insisted that he was on the side of the citizens, but in hindsight, he labored for himself, and when it was convenient, he stole from the people. Ameachi saw APC as an escape root and hoped that he could be picked as the Vice Presidential Candidate if he funded the APC party campaign efforts and if that was off the table, he could secure either a Ministerial or Ambassadorial slot. But more importantly, as if he had switched political party, he could get cover’ for his many ‘sins’ against the people of Rivers State.

For now, Amaechi’s cover is still on as no Federal authority is probing him for any wrong doings. The fact, however, remains a blight on the Buhari Administration, and the symbol of why Buhari’s anti- corruption is selective, lopsided and covers for Buhari’s party men. Meanwhile, all the monies totaling over N 240,710,186,927:16 and $ 116,552,042:46 are yet to be recovered into the Rivers State treasury.

Rotimi Amaechi’s Ministerial position is his cover for now. But like all things Nigeria, will the Law ever take effect, and now that the White Paper has been forwarded to the EFCC and ICPC, would any action be taken against a man described as a powerful Minister and a ‘money bag’ of the APC political party? At the very least, it will suffice to say that either Buhari’s hands are tied or he’s afraid because his campaign and government are the beneficiary/product of corruption.

This Investigative Report was brought exclusively by Caracal Reports’ investigators, who were able to gain inside access to the Government agencies.