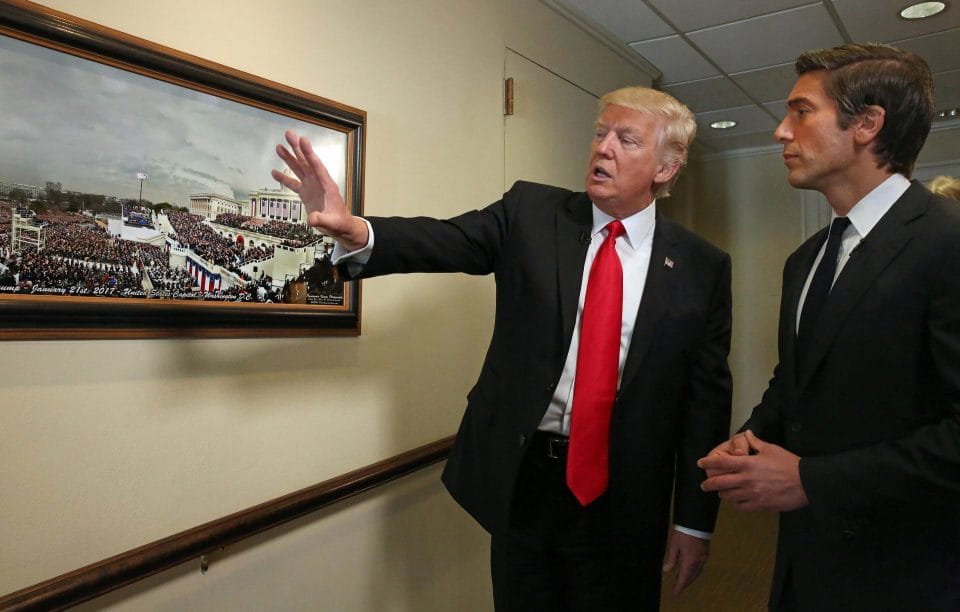 Dozens of psychiatrists have said that President Donald Trump has a “dangerous mental illness” and is not fit to be president of the United States at a conference at Yale last Thursday. The psychiatrists said that it was their “ethical responsibility” to warn the public of the danger Mr. Trump’s mental state poses to the country.

Dr. John Gartner, a founding member of Duty to Warn, an organization of mental health professionals who think that Mr. Trump is mentally unfit to be president, is particularly concerned about the President’s statement about having the largest crowd at an inauguration.

“Worse than just being a liar or a narcissist…he is paranoid, delusional and grandiose thinking and he proved that to the country the first day he was President. If Donald Trump really believes he had the largest crowd size in history, that’s delusional,” said Dr. Gartner.

Here is a compilation, courtesy of Jimmy Kimmel, of Trump praising himself several times during his first interview since entering the White House:

Earlier this year, Dr. Gartner created an online petition calling for mental health professionals to “declare Trump is mentally ill and must be removed.” The change.org petition currently has over 8,000 signatures.

Another psychiatrist and New York University professor James Gilligan said, at the conference, that based on his experience working with “murderers and rapists” that he can “recognize dangerousness from a mile away.”

“You don’t have to be an expert on dangerousness or spend fifty years studying it like I have in order to know how dangerous this man is,” said Gillian.

The conference has drawn criticism from both sides of the political aisle, along with others from within the psychology field for violating the American Psychiatric Association’s “Goldwater rule,” which says that no mental health professional should attempt to diagnose or give professional opinions on someone without having personally examined them.

APA president Dr Maria Oquendo said last year that breaking the Goldwater rule would be “irresponsible, potentially stigmatizing, and definitely unethical,” and that it could decrease patients’ confidence in their doctors.

However, the controversial claim was defended by Dr. Bandy Lee, a leading Yale psychiatrist, who said that the claim was not politically motivated in any way.

“To say that there are mental health impairments in Mr. Trump is not to make a moral judgment on him, and not to indict him in any way,” Lee said in an interview with the Independent. “It should not be used as a political weapon against him, but rather should be raised as a concern just like any medical issue that may impair an individual’s ability to function in office.”

Addressing the Goldwater rule, Lee said that a “reaffirmation” of the rule in March had expanded it “beyond any original language” and that her panel had “adhered to the Goldwater Rule in its original conception.”

This isn’t the first time mental health professionals have raised concerns about the President’s mental stability.

Al Franken and several of his Republican colleagues shared the opinion that Trump was mentally unfit for the job.

Shortly thereafter, 35 mental health experts, including psychiatrists, psychologists, and social workers signed a letter that was sent by Dr. Lance Dodes, who is a retired clinical professor of psychiatry at Harvard Medical School.

In the letter, Dr. Dodes wrote that the issue of the President’s mental health was so critical to warrant the medical community to speak out.

Dr. Dodes, speaking on behalf of himself and the 35 signatories, opined that, “We believe that the grave emotional instability indicated by Mr. Trump’s speech and actions makes him incapable of serving safely as president.”

The significant support from mental health experts across the country is certainly nothing to ignore, but from a practical perspective, is there anything that can be done to remove Trump based on mental unfitness?

Section 4 of the 25th amendment of the U.S. constitution “provides the procedures for replacing a president or vice president in the event of death, removal, resignation, or incapacitation. The amendment was born after President John F. Kennedy’s death.

To execute this constitutional provision, the Vice President and a majority of the Cabinet would have to send a letter to Congress indicating that he is “unable to discharge the powers and duties of his office.”

The problem here is that it is unlikely both the Vice President and the Cabinet would come together and put forth such a proposal absent a clear danger. And then there is the possibility that the President could remove his Cabinet before it could take any action.

However, as part of the amendment, Congress has the authority to evaluate the President’s mental fitness and move forward accordingly. The removal of the President by Congress is no small feat, and given the Republican majority in Congress, this would certainly be a challenge.

However, Trump’s removal for incapacitation and inability to fulfill his duties becomes a much more real possibility as he continues to mentally spiral downward.