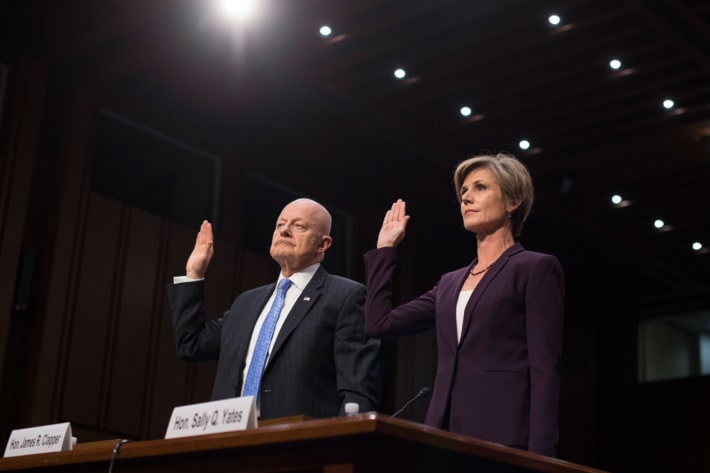 Both sides seemed to be fighting for the premise of the proceedings, and that was perhaps the most frustrating part.

Democrats, by and large, stuck to the hearings’ proposed thesis, asking about the former Attorney General’s suspicions about General Flynn and his ties to the Russian government. The result was nominally revealing, only clarifying details from a Yate’s first-hand perspective, most of which had been previously reported through other sources.

She said that Flynn was vulnerable to blackmail by Russia, and urgently warned President Trump about in late January when she called the White House counsel, Donald F. McGahn II and then had a series of meetings.

“We wanted to tell the White House as quickly as possible,” Yates said to the subcommittee. “To state the obvious: You don’t want your national security adviser compromised with the Russians.”

This is a revealing piece of the overall timeline – especially if you’re already convinced of the Trump administration’s wrongdoing – and casts a long shadow over the administration’s decision to fire Flynn 18 days later. However, it also didn’t add any substantive information about the connections between Trump and Russia.

That said, James Clapper didn’t really give much information for Democrats to work with when he said that he didn’t have evidence of collusion between the Trump campaign and the Russians.

Republicans, however, diverted importance from the connections to Russians and felt it was more necessary to cast doubt and suspicion on Yates.

Yates was forced out of her position as acting Attorney General by the Trump Administration after deeming President Trump’s travel ban unlawful, an act of defiance that led to her swift firing, and made her enemy number one for conservatives.

Telegraphed by the President’s tweet, Republicans fell into line and used the hearing as a way to question Yates about why information about Flynn was leaked to the Washington Post (which lead to Flynn’s swift resignation), Hillary Clinton’s emails were brought up for some reason, and Senators snidely asked her about her decision to contest the travel ban.

“Who appointed you to the United States Supreme Court?” asked Senator John Kennedy (R-Lo.) who implied that she was required to obey Trump unless the Court voided his order.

Yates stood her ground, explaining that she was doing her job, and was later pressed by Ted Cruz (R-Tx.).

“I’m not,” replied Yates, “But I’m also not aware of a situation where the Office of Legal Counsel was advised not to tell the attorney general about it until after it was over.”

However, conservative media saw the exchange in a different light. Breitbart’s Joel B. Pollak made the dubious argument that Cruz “cleaned Yate’s clock” and argued that the hearing failed to produce anything meaningful to the “Russian conspiracy theories.”

The right wing’s reluctance to investigate connections between Trump and Russia, and make it a referendum on Yates’ political views, follows a series of mental gymnastics that can be unpacked in a series of leaps in logic:

Despite Republican’s line that there’s nothing to see between Trump and Russians, presiding chairman of the subcommittee, Senator Lindsey Graham has indicated that the investigation is going to continue with an investigation into Trump’s dealings in Russia.