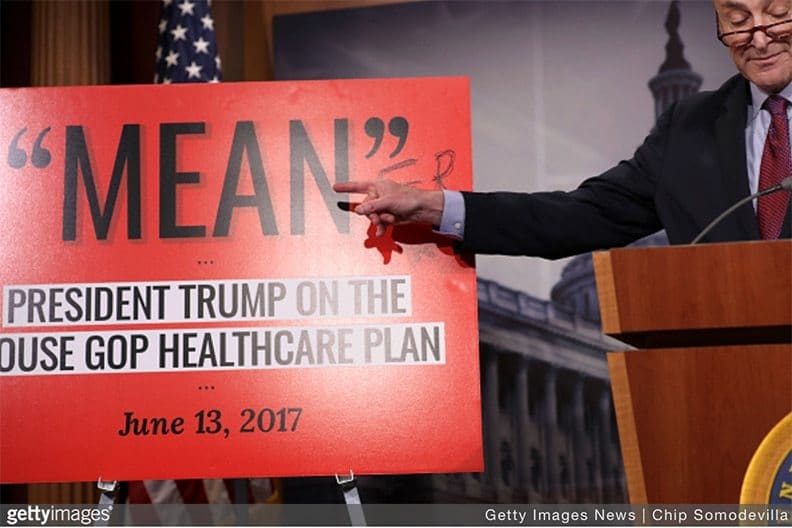 After much anticipation, Senate Republicans released a draft of their healthcare bill today, which up until today was kept secret. However, the text is likely to change before a vote.

The bill, if passed unchanged, would cut all federal funding to Planned Parenthood and allow insurers to raise premiums for people with preexisting health conditions. The bill will not allow tax credits to pay for any insurance plan which covers abortion.

It will also repeal President Obama’s expansion of Medicaid and cap future state Medicaid payments. The bill also allows states to create requirements to revoke Medicaid to unemployed, able-bodied people, people who are pregnant, and single parents of young children.

Senate Majority Leader Mitch McConnell presented the bill, called the Better Care Reconciliation Act of 2017. McConnell said, “Republicans believe we have a responsibility to act – and we are.”

In remarks discussing the bill, President Trump stated, “We’ve had a thing called healthcare that is… percolating. Obamacare is dead and we’re putting a plan out today that is going to be negotiated. We’d love to have some Democrats’ support but they’re obstructionists.”

While the bill appears to be more moderate than a previous House version, it still cuts in many areas.

Fifty votes are required to pass the bill. Fifty-two Republicans are currently in the Senate, and no Democrats are expected to support the bill. Republicans who may not support the bill would be those up for re-election and moderate Republicans, including Lisa Murkowski (R-Alaska), Dean Heller (R-Nevada), and Susan Collins (R-Maine). In particular, Senator Collins’ office released a statement, noting that she has, “a number of concerns”.

Senator Rand Paul (R-Kentucky) has also already voiced criticisms of the bill, saying, “I think the death spiral of Obamacare continues. The Republican plan doesn’t fix that; the Republican plan just subsidises it.”

Senate Majority Leader Chuck Schumer (D-New York) condemned the bill, saying, “This is a bill that would end Medicaid as we know it, rolling back Medicaid expansion, cutting federal support for the program even more than the House bill. […] It’s every bit as bad  as the House bill, in some ways even worse.” House Minority Leader Nancy Pelosi (D-California), called the bill, “a tax bill disguised as a health care bill”.

Majority Whip John Cornyn (R-Texas) said that senators would be permitted to offer unlimited amendments next week, and will get twenty hours to debate the bill.

Today, disability rights activists, many of whom were in wheelchairs, protested outside of Senator McConnell’s office in opposition of the healthcare legislation which would cause significant cuts to Medicaid. Protesters chanted “No cuts to Medicaid, save our liberty”, as some were arrested and removed by police.