The Sexualization of Women’s Bodies in Uganda 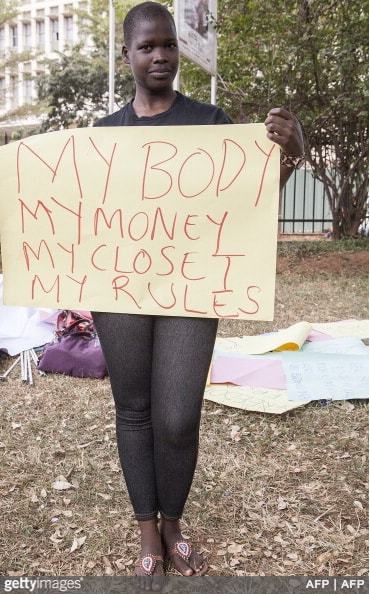 As if Uganda’s track record with its anti-LGBT policies was not bad enough, the role of women in society, in the eyes of the government, has proven to be a question of integrity, equality, and sexualization. Civil servants in the African country have been well-informed of a new policy of suppression as to what these women can wear. The ruling has brought to light new interpretations of what it means to dress in a decent manner. As per the new injunction, Ugandan women are not allowed to:

As reported by Adah Muwanga, director of human resources at the Public Service Ministry, the new decree was necessary because of an overwhelming amount of complaints about female public officers that said: “body parts should be covered.”

However, Rita Achiro, head of the Uganda Women’s Network, whose vision is a Ugandan society free of all forms of gender based discrimination, labeled the order as a diversionary move. “How does dress code affect service delivery?” she questions. “What Ugandans need are more teachers and nurses.” She emphasizes that there is a high maternal mortality rate, as well as an influx of children in schools without teachers. “I don’t see how banning of mini-skirts and bright-colored shirts is going to fix that,” she exclaims.

The definition of dressing decently in Uganda has extended beyond the formal and professional setting to a relaxed environment as women been criticized for wearing clothes labeled as inappropriate to parties and casual gatherings. One such girl, Rebecca Naddamba, a final-year education student, was photographed wearing a revealing skirt to a party that resulted in a backlash and the questioning of her ability to become a teacher because of it. She, however, believes that dressing should plainly be about appropriateness. Naddamba emphasizes that she is “looking forward to becoming a teacher. I will tell my students that there is a difference between dressing for a classroom, a place of work and a party.”

Naddamba’s case and the subsequent declaration has examined the question of whether the Ugandan society has spent too much time and effort fussing over what women should and should not wear, while simultaneously, resorting to the sexualization of women and their bodies.

Patience Akumu, a lawyer and activist calls the entire situation the “institutionalization” of the policing of women’s bodies, while Lindsey Kukunda, a writer and artist, believes that a fusion of culture and religion, and the obsession of such entities, oppresses women. “If you’re a woman, your decency is in your clothes. If decency was contained in clothes, we would spot a rapist or a corrupt politician from miles away,” she proclaims.

As the founder of Not Your Body, an online movement that reports incidents of harassment, Kukunda tells the story of being a victim on the streets of Kampala, the capital of Uganda. “About a year ago, I was standing on the roadside waiting for a friend to pick me up. I was wearing shorts. Men started calling me a prostitute. I sought help from a traffic cop, who looked me up and down and said ‘Well, isn’t that what you want?’”

Some activists, including Ms. Achiro from the Uganda Women’s Network, genuinely believe that this is just another step in the stripping away of women’s rights in Uganda and Africa entirely. “Our rights are being taken away piece by piece and soon we will have no space to speak,” she argues.