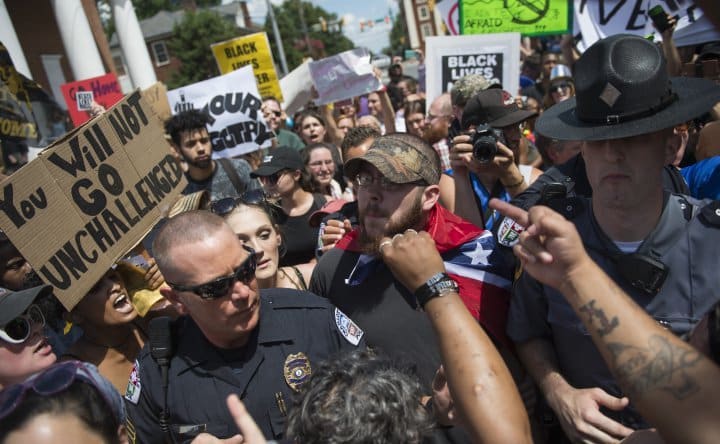 Another horrific day of violence beset Charlottesville Virginia, leaving three dead. Emboldened white supremacists, neo-nazis, and members of the Ku Klux Klan converged on the city, in what is believed to be the largest gathering of white nationalists in a decade. Hundreds came to protests the ideas espoused by the groups, carrying signs that read “Black Lives Matter” and “Love.” Things turned to violence shortly thereafter, as street fights erupted with rocks and pepper spray. The violence culminated in a driver, who has been accused of purposely ramming into a group of protesters, injuring roughly 25, and taking the life of a young woman.

The police currently have a suspect in custody. According to The Independent, the suspect is James Alex Fields Jr, who allegedly rammed his car into a group of protesters, killing one. Mr Fields Jr has subsequently been charged with second-degree murder, malicious wounding and failing to stop at a deadly accident. Police have yet to provide a motive for Mr Fields Jr’s alleged act, however, the US Attorneys and FBI have opened a civil rights investigation into the crash.

Governor Terry McAuliffe declared a state of emergency, and quickly condemned the white nationalists saying: “Our message is plain and simple: go home,you are not wanted in this great commonwealth. Shame on you. You pretend that you’re patriots, but you are anything but a patriot. You came here today to hurt people. And you did hurt people. But my message is clear: We are stronger than you.”

This is a far cry from the sentiments of President Trump, who avoided condemning the white nationalists altogether. The president called for an end to the violence, and condemning only the hatred and bigotry, but not those who harbor either. The President stated at the end of his remarks: “what is vital now is a swift restoration of law and order and the protection of innocent lives.” The president then left the room, amid reporters shouting questions to him.

The president’s refusal to condemn the white supremacists was immediately met with the ire of both democrats and republicans. “Mr President – we must call evil by its name,” tweeted Republican Senator Cory Gardner, chairman of the National Republican Senatorial Committee. Democratic leader in the House of Representatives, Nancy Pelosi, tweeted: “Repeat after me, @realDonaldTrump: white supremacy is an affront to American values.”

According to The Independent, Charlottesville Mayor Michael Signer blamed the president for exacerbating racial tensions in the US during his campaign for president. The President’s inflaming of racial prejudices, perhaps emboldening the the white supremacists, leading to the large rally. Mayor Signer said: “I’m not going to make any bones about it. I place the blame for a lot of what you’re seeing in America today right at the doorstep of the White House and the people around the President.”