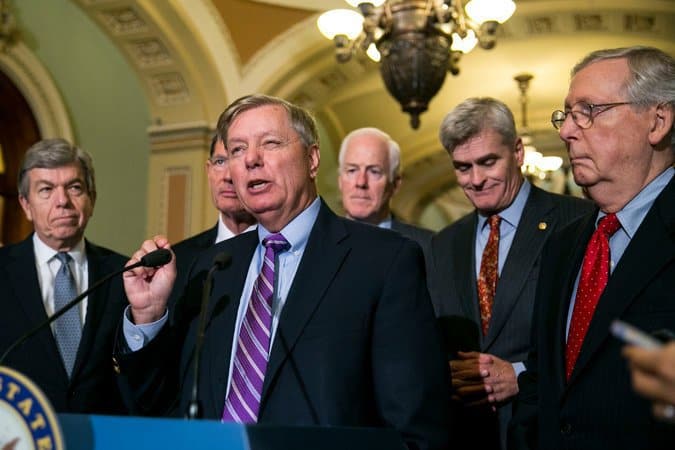 Share
Posted: September 26, 2017 at 7:39 pm   /   by Conor Baker   /   comments (0)
tags:
Senate Republicans most recent attempt to replace the Affordable Care Act, colloquially known as Obamacare, has failed. The Graham-Cassidy Bill as it was being called, was seen by many Republicans as a fair proposal upon its release. Despite the anger of former President Obama over their attempts at  “inflicting real human suffering on their constituents,” it seemed as though the bill would at least be voted on. Today, however, Senate majority leader Mitch McConnell announced that the bill would not even come to a vote.

After many high-profile Republicans announced their intentions to vote against the Graham-Cassidy Bill, the bill looked to be losing steam. Headlined by prominent Senator and former Republican nominee for president, John McCain, more and more republicans stated they intended to vote no. McCain made headlines over the summer after he killed a previous attempt to repeal the Affordable Care Act. McCain was not alone, as Susan Collins of Maine, herself a prominent member of the GOP, announced that she would vote no as well. In addition, Senator Rand Paul also publically announced his dissension for the bill.

Senator McConnell’s decision came earlier Tuesday after a lunch with fellow Republicans. Senator McConnell declared what many already knew, they did not have the votes. This will leave Republicans to either drop the attempts at repeal altogether or go back to the drawing board. The first seems unlikely, as Republicans have been attempting to remove the Affordable Care Act since its implementation. In addition, Senator McConnell said: “We haven’t given up on changing the American health care system. We are not going to be able to do that this week, but it still lies ahead of us, and we haven’t given up on that.”

The Republicans have since indicated their intentions of trying again to repeal and replace the Affordable Care Act. They have said that this attempt would be more transparent than their previous attempts to jam legislation through the Senate. Their new plan is to try again through the 2019 budget reconciliation process. This process would again require just 50 Republican votes to pass and would not require any democratic backing. However, Senators Graham and Cassidy have indicated that they intend to hold committee hearings, markups and even reach out to Democrats.

However, President Trump warned Republicans that if they could not repeal the Affordable Care Act, then he would negotiate with Democrats to get a deal done. Having just recently negotiated with prominent Democrats to raise the debt ceiling and government spending. This was met with much confusion especially from Republicans, but President Trump has reflected on how he likes the deal he made with Senate minority leader Chuck Schumer and House Minority Leader Nancy Pelosi. However, the president also announced his displeasure with Senator McCain for publicly denouncing the Graham-Cassidy bill.

#GrahamCassidy is officially dead. It’s time to get to work, hold hearings & find bipartisan ways to improve our #HealthCare system.