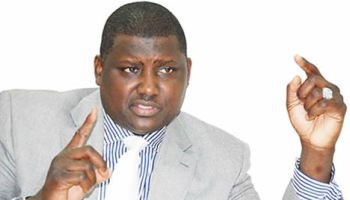 The People’s Democratic Party, a major Nigerian opposition, and a source at the Economic and Financial Crime Commission allege that the Federal Government is protecting the embattled ex-chairman; Abdulrasheed Maina, the former ex-chairman of the Presidential Task Force on Pension Reforms.

Maina, who went into hiding, allegedly stole N195 billion in pension funds at a time fund recipients were dying while waiting to be paid entitlements. The Nigerian Police declared him wanted in 2012. Wielding his influence, Maina has neutralized all efforts to answer questions about his controversial tenure at the task force.

EFCC also declared Maina wanted in July 2015 and Interpol in February 2016 over the same fraudulent acts. The EFCC charged him to appear in court alongside former Head of Service, Steve Oronsaye, and two others involved in alleged biometric pension fraud of N2 billion.

The other accused persons appeared in court, however, Maina absconded and reportedly fled the country, thus prompting former President Goodluck Jonathan ordered the Federal Civil Service to terminate his appointment for absenteeism.

The PDP said it was not surprised by the government’s controversial decision to reinstate Maina blaming President Muhammadu Buhari’s administration.

Prince Dayo Adeyeye, a spokesperson for the party disclosed Nigerians had expected Maina to be arrested not reinstated.

In a recent interview with Caracal Reports, Adeyeye said corruption would soon consume the nation, explaining it is in the light of this that the PDP wishes to say that it is not too shocked at the steps taken by the administration of the All Progressives Congress in reinstating a supposed criminal and fugitive, Maina, to office instead of getting him arrested.

“Birds of the same feather flock together. All people of good conscience will not forget in a hurry that Maina, who was given an assignment by the last administration of the PDP to superintend the now defunct Presidential Task Force on Pension Reforms, dipped his hands into the jar and helped himself to N100bn of what he was supposed to safeguard.”

“With good conscience at fighting corruption, the PDP government then mandated the anti-corruption agencies to perform their constitutional duty. Maina fled, only to resurface in the country four months ago under the Buhari administration.”

Adeyeye added, “As a party of good conscience, we wish to condemn in strongest terms the penchant of the administration of President Buhari to giving safe haven to known criminals while hoodwinking Nigerians that it’s fighting corruption. Maina had been paid N22m salary arrears by the Federal Government.

“It is reported that the fugitive has been rewarded with a payment of bogus salary arrears amounting to N22m, which he has reportedly collected upon approval and released by the Accountant General of the Federation. We dare the government of the day to deny this with verifiable evidence.”

A source in EFCC, who claimed anonymity due to the sensitivity of the issue, said that a sister security agency, the Department of State Services, has been shielding the suspect from arrest.

According to the source, Maina was seen moving around Abuja in a bulletproof Range Rover Sports Utility Vehicle and three other vehicles that are believed to be owned and guard by the DSS.

“We have traced him to a hotel in Kaduna where he went to spend the weekend; we know that the DSS is protecting him and the management of the agency has deployed men to protect him. But make no mistake, we will arrest him, already we’ve frozen all his accounts. At the moment, he stays in one of the DSS safe house,” the source said.

EFCC Spokesperson Wilson Uwujaren disclosed that the commission marked his houses in Abuja; including a house in Jabi said to be worth $2m.

“His properties were marked today. To the best of my knowledge, he has not yet been arrested,” said Uwujaren.

The DSS described the EFCC’s allegations as baseless and unfounded as it challenged it to support the claims with evidence.

“There is no need responding to baseless allegations because there was nothing like that. Both of us are doing same work, which is apart from making the country safe from fraudulent people, we also collaborate with each other in the area of collating of data on other things. This is why I’m surprised on this baseless allegation by your source,” a source in DSS said.

On Monday President Buhari ordered for Maina’s immediate disengagement from the Federal Civil Service and directed the Head of Service, Winifred Oyo-Ita, to furnish his office with a full report on the circumstances of his recall.

Femi Adesina, Special Adviser to the President on Media and Publicity, tweeted from his handle @FemAdesina, “PMB orders immediate disengagement of Mr. Abdulrasheed Maina from service. Asks for a full report on circumstances of his recall.”

In a statement he later signed, Adesina quoted the President as ordering that the full report should be submitted to his Chief of Staff, Abba Kyari, before the close of work on Monday.

Oyo-Ita’s claim contradicts the retired Minister of Interior, Lt.-Gen. Abdulrahman Dambazau, who absolved himself of complicity blamed the office of the HoS.

Dambazau claimed that the wanted man was posted to his ministry by the HoS a “few day ago” to fill a vacancy.