Trump Jr. Secretly In Contacts with WikiLeaks during 2016 campaign 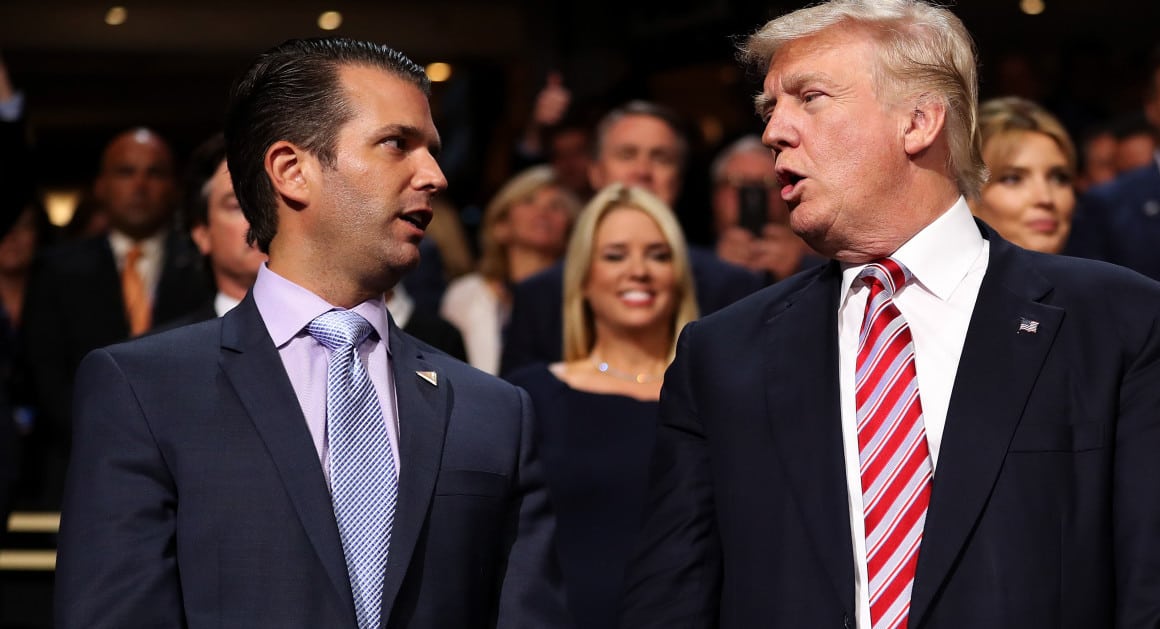 Candidate Trump And His Son during the 2016 Campaign

President Donald Trump’s oldest son released a series of direct messages from his Twitter account revealing exchanges between himself and WikiLeaks during and after the 2016 Presidential election.

Donald Trump Jr.’s release of the messages came hours after The Atlantic first reported them Monday. “Here is the entire chain of messages with @wikileaks (with my big three responses) which one of the congressional committees has chosen to leak selectively. How ironic! ” he downplayed in a tweet.

According to the released messages, WikiLeaks reached out to President Donald Trump’s adult son just before midnight on September 20, 2016, regarding a PAC-funded, anti-Trump website.

The New York Times reported in July 2016 that US intelligence agencies believed that Russia was behind the Democratic National Committee hacking.

On October 7, 2016, the intelligence community publicly announced that US intelligence officials had assessed “with high confidence” that Russian intelligence hacked the DNC and Clinton campaign chairman John Podesta, and then subsequently provided internal materials obtained through the hacks to WikiLeaks so they could be publicly released.

In the exchanges — some of them around the time that the website was releasing the stolen emails from Democrat Hillary Clinton’s campaign chairman — WikiLeaks praises his father’s positive comments about WikiLeaks and asks Trump Jr. to publish his father’s tax returns to the site.

The private messages released by Trump Jr. show him responding to the WikiLeaks account three times, at one point agreeing to “ask around” about a political action committee WikiLeaks had mentioned. He also asked the site about a rumor about an upcoming leak. The messages began in September 2016 and ran through July.

In a statement, Trump Jr.’s lawyer said thousands of documents had been turned over to the committees.

“Putting aside the question as to why or by whom such documents, provided to Congress under promises of confidentiality, have been selectively leaked, we can say with confidence that we have no concerns about these documents and any questions raised about them have been easily answered in the appropriate forum,” said Alan Futerfas.

Futerfas didn’t say which forum he was referring to, but Trump Jr. was interviewed behind closed doors by Senate Judiciary Committee staff in September. A person familiar with that meeting said the private Twitter messages were discussed. The person declined to be identified because the transcript of that interview hasn’t been made public.

In one message dated Oct. 3, 2016, the WikiLeaks Twitter account sent Trump Jr. an article that included critical comments Clinton had made about WikiLeaks editor Julian Assange and said: “it’d be great if you guys could comment on/push this story.”

Trump Jr. replied: “Already did that earlier today. It’s amazing what she can get away with.”

Longtime Trump associate Roger Stone had tweeted the day before that on Wednesday, “Hillary Clinton is done,” referencing WikiLeaks.

The rest of the messages are one-sided, with WikiLeaks sending Trump Jr. messages through July 2017. They include praise for his father for mentioning them on the campaign trail, a plea to release Trump’s taxes to the site and advice on Election Day that Trump should not concede if he lost. One message suggested Trump encourage Australia to appoint Assange as U.S. ambassador.

In July, the Twitter account messaged Trump Jr. to ask him to give the site emails surrounding a meeting he and other Trump associates held with Russians during the campaign. Trump Jr. then released them himself.

Vice President Mike Pence responded quickly to the revelations, issuing a statement through his press secretary that he knew nothing about the situation.

“The vice president was never aware of anyone associated with the campaign being in contact with WikiLeaks,” said spokeswoman Alyssa Farah. “He first learned of this news from a published report earlier tonight.”

Assange tweeted after The Atlantic report that he couldn’t confirm the messages but then defended them after Trump Jr. released them.

“WikiLeaks appears to beguile some people into transparency by convincing them that it is in their interest,” Assange tweeted.

Democrats swiftly reacted to the report, saying Trump Jr. should provide more information. California Rep. Adam Schiff, the top Democrat on the House intelligence committee, says it “demonstrates once again a willingness by the highest levels of the Trump campaign to accept foreign assistance.”

Schiff also pointed to Cambridge Analytica, a data firm that worked for Trump’s campaign and reached out to WikiLeaks before the election about obtaining emails related to Clinton, according to the company’s CEO.

Democratic Sen. Richard Blumenthal, a member of the Senate Judiciary Committee, said that panel should subpoena the documents and force Trump Jr. to testify publicly.

“There seems to be no reasonable explanation for these messages,” Blumenthal said.

Senate Judiciary Committee Chairman Chuck Grassley had said he would call Trump Jr. to testify after the private interview in September publicly. But negotiations over witnesses broke down last month amid disagreements with Democrats on the panel.

The House and Senate intelligence committees are also expecting to interview Trump Jr., but those interviews are supposed to be behind closed doors.

The news comes amid several investigations into possible links between the Trump campaign and Russia. Trump Jr. faced scrutiny after it was revealed he agreed to meet with a Russian attorney who was promising “dirt” on Clinton. That meeting, in June 2016 at Trump Tower, included Trump Jr., Jared Kushner, and Paul Manafort.