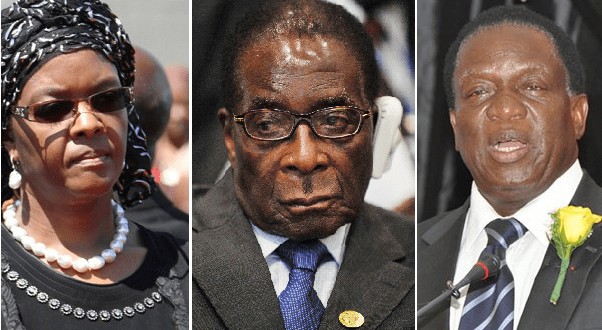 Political turmoil erupted in Zimbabwe Wednesday, raising questions of whether 93-year-old President Robert Mugabe remains in control of the country — or if he’s been overthrown in a military coup.

Zimbabwe’s military said it had taken custody of Mugabe, in what increasingly appears to be a military takeover in the southern African nation.

After apparently seizing the state broadcaster, ZBC, two uniformed officers said in a short announcement at 4 a.m. local time, “the situation in our county has moved to another level.” While denying the military had seized power, they said Mr. Mugabe and his family “are safe and sound, and their security is guaranteed.”

“We are only targeting criminals around him who are committing crimes that are causing social and economic suffering in the country to bring them to justice,” said the principal speaker, who was identified as Maj. Gen. S. B. Moyo, the army’s chief of staff.

“To both our people and the world beyond our borders, we wish to make it abundantly clear that this is not a military takeover of government,” he said.

“What the Zimbabwe Defense Forces is doing is to pacify a degenerating political, social and economic situation in our country, which if not addressed may result in a violent conflict,” he said. He urged the public to remain calm but “limit unnecessary movement.” 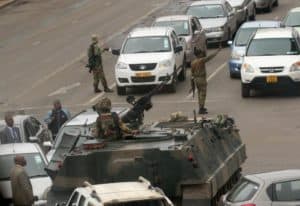 General Moyo — who was not widely known to the public but who was considered close to the commander of the Zimbabwe Defense Forces, Gen. Constantine Chiwenga — warned that “any provocation will be met with an appropriate response.”

For the first time, this southern African nation is seeing the military oppose Mugabe, the world’s oldest head of state and one of the longest-serving authoritarian rulers. Mugabe has been in power since Zimbabwe’s independence from white minority rule in 1980.

The sudden appearance of soldiers in the capital comes amid rising political tensions in the aftermath of Mugabe’s shock firing of his deputy, Vice President Emmerson Mnangagwa.

Mnangagwa had previously been considered likely to succeed Mugabe if the president stepped down or died in office. His sudden dismissal cleared the way for 93-year-old Mugabe to appoint his wife, Grace, to the position, prompting widespread discontent among formerly loyalist supporters.

Many analysts believe that the move by the President to sack his vice president, which gives Grace Mugabe a more unobstructed path to the presidency, was a risky one.

Grace Mugabe is much younger than her husband and does not enjoy widespread support, nor does she have the backing of the liberation-era party stalwarts.

She has drawn outrage from Zimbabweans for appearing to be out of touch; nicknamed “Gucci Grace” for her extravagant shopping sprees abroad – trips which stand in stark contrast to the lives of those stricken by the country’s massive inflation and debt burdens.

While Robert Mugabe and Grace Mugabe haven’t responded directly to Chiwenga’s remarks, the Zanu-PF Youth League, a key ally of Grace Mugabe, slammed what they said was an overreach by the military into political issues.

Former deputy Mnangagwa enjoys strong support among the country’s military and security establishment. A famous freedom fighter in the country’s liberation wars, the 75-year-old has since gone into hiding, and his whereabouts are unknown.

Mugabe, the longest-serving leader in Africa, came to power in the 1980s after Zimbabwe’s liberation. He was initially revered as a Nelson Mandela-like independence advocate.

As that political momentum began to fade, Mugabe moved too quickly consolidate power using a combination of brutality and bribery, according to CNN’s Robyn Curnow.

Mutsvangwa and the war veterans are staunch allies of Emmerson Mnangagwa, who was fired from his post of vice president by Mugabe last week. Mnangagwa fled Zimbabwe previous week but said he would return to lead the country.

The U.S. Embassy closed to the public Wednesday and encouraged citizens to shelter in place, citing “the ongoing political uncertainty through the night.” The British Embassy issued a similar warning, citing “reports of unusual military activity.”

“Defending the revolution and our leader and President is an ideal we live for, and, if need be, is a principle we are prepared to die for,” Kudzai Chipanga, Zanu-PF’s secretary of youth affairs, told reporters early Tuesday.