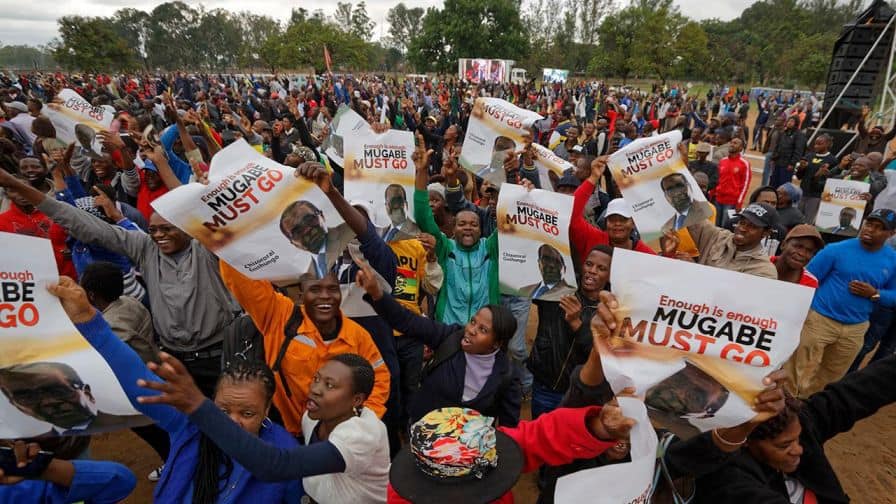 The Central Committee, Zimbabwe’s ruling party, fired longtime President Robert Mugabe as party leader Sunday, requesting his resignations as the country’s president by noon Monday. If he does not, they plan to begin impeachment proceedings when Parliament resumes the following day. Under the Constitution, Mr. Mugabe remains president, even if in name only.

Mugabe was set to discuss his expected exit with the army commander who put him under house arrest days ago, in the second round of negotiations. But the world’s oldest head of state was increasingly isolated in his lavish mansion, with allies departing, arrested, or like his wife, now expelled from the ruling party.

Before the committee’s decision, Chris Mutsvangwa, a war veteran who has led the campaign to oust Mr. Mugabe, said as he went into the meeting, “We are going all the way,” according to Reuters.

He said that Mr. Mugabe should resign and leave the country: “He’s trying to bargain for a dignified exit, but he should just smell the coffee.”

A huge crowd rallied peacefully in the capital, Harare, for the 93-year-old Mugabe to go, members of the ruling party’s Central Committee stood, cheered and sang as Mugabe was ousted. Obert Mpofu, the meeting chair, referred to him as “outgoing president” and called it a “sad day” for the man who had spent 37 years in power.

“He has been our leader for a long time, and we have all learned a great deal from him,” Mpofu said. But Mugabe “surrounded himself with a wicked cabal” that brought him down.

The meeting replaced Mugabe as party chief with the vice president whose firing nearly two weeks ago led the military to step in, and recall the unpopular first lady Grace Mugabe as head of the ZANU-PF women’s league. Mrs. Mugabe, widely viewed as his likely successor, has not been seen in public since Wednesday.

The youth league of Zimbabwe’s ruling party said Mr. Mugabe should resign and take a rest as an “elder statesman,” while his wife should be expelled from the party “forever,” The Associated Press reported.

The league leader, Yeukai Simbanegavi, praised the military on Sunday for moving against what she described as a group of “criminals” led by Mrs. Mugabe, The A.P. said.

Emmerson Mnangagwa, the former vice president, is expected to lead a new government after the ruling party named him its nominee to take over as the country’s president when Mugabe exits office. Without the military’s intervention, the first lady likely would have replaced Mnangagwa as vice president placing her in a position to succeed her husband.

The party accused the first lady of “preaching hate, divisiveness and assuming roles and powers not delegated to the office.” The party’s decision to remove her has the head of the women’s league will be formalized at a special congress next month.

When Parliament resumes on Tuesday, impeaching the president is the next step, and lawmakers will “definitely” put the process in motion the main opposition’s parliamentary chief whip told the Associated Press.

Innocent Gonese with the MDG-T party said they had been in discussions with the ruling ZANU-PF party to collaborate.

If Mugabe is not gone by Tuesday, then as sure as the sun rises from the east, impeachment process will kick in,” Gonese said.

To avoid the accusations of a coup, the military in their second round of negotiations between army commander Constantino Chiwenga and Mugabe regarding his exit has occurred.

The Zimbabwean officials have not revealed details of the talks, but the military appears to agree with a voluntary resignation by Mugabe to maintain a veneer of legality in the political transition. Mugabe, in turn, could be using whatever leverage he has left to try to preserve his legacy as one of Africa’s liberation leaders or even protect himself and his family from possible prosecution.

In a resolution, party leaders said Mr. Mugabe should be removed for taking the advice of “counterrevolutionaries and agents of neo-imperialism”; for mistreating his vice president, Mr. Mnangagwa, whom Mr. Mugabe abruptly dismissed; and for encouraging “factionalism.”

It urged the “immediate and unconditional reinstatement” of Mr. Mnangagwa, at least until the national elections that are scheduled for next year.

Chris Mustsvangwa, head of the country’s liberation war veterans, said he was concerned that the military could end up firing their weapons to protect Mugabe from protestors. He vowed to “bring back the crowd” if the president didn’t step aside.

“We would expect that Mugabe would not have the protest of the military shooting at people, trying to defend him,” Mustsvangwa said. “The choice is his.”

Visibly absent in Sundays’ negotiations were the South African’s government delegation that took part in the first round. The southern African regional bloc will hold a four-country summit in Angola on Tuesday to discuss the Zimbabwe situation.

Most of Harare’s population of 1.6 million gathered in the streets on Saturday in anti-Mugabe demonstrations that just days ago would have brought police intervention.

The euphoria came after years of watching the once-prosperous African nation fall into decay, with a collapsing economy, repression of free speech, disputed elections and international sanctions.

Uncertainty about what was to come for the people of Zimbabwe; along with who might be in charge, what freedoms might be available if the military lingers in power – or if Mnangagwa succeeds his longtime ally Mugabe as leader — were just a few of the concerns people revealed in the rare chance to express themselves freely.