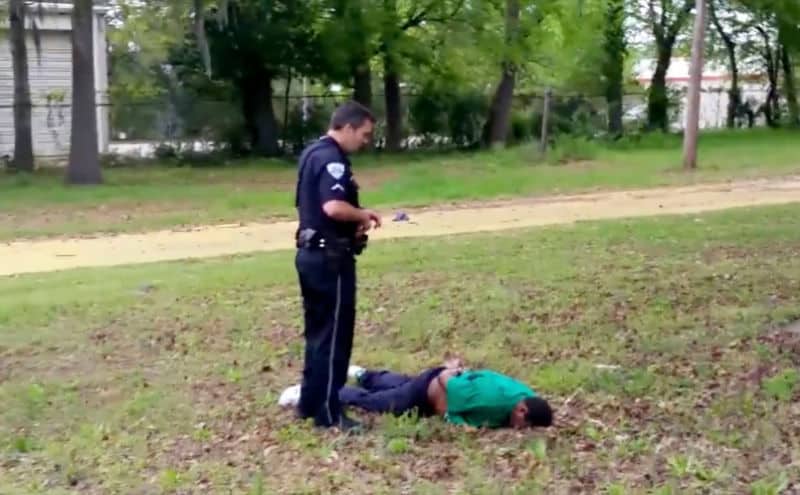 Michael Slager looking over the body of Walter Scott after he shot him eight times in the back, killing him

Michael Slager, a former police officer who killed an unarmed black man in South Carolina, has been sentenced to 20 years in jail.

The case, coming at a time of heightened racial tensions, attracted national attention and sparked strong feelings on both sides.

Slager, a 36-year-old man who was working as a police officer in the town of North Charleston, shot and killed Walter Scott, a 50-year-old African American man, in 2015 when a routine traffic stop went wrong.

Back in April 2015, Slager pulled Scott over because of a broken light on Scott’s car. Scott fled, and Slager ran after him. After a brief scuffle, Scott seemed to be getting away. Slager pulled out his gun and fired, hitting Scott in the back five times and shooting him.

Prosecutors said Slager also dropped his Taser gun next to Scott’s body. The prosecution said Slager wanted it to look like Scott had been attacking him.

Slager was at least 17 feet away from Scott when he shot at him.

During the sentencing on Thursday, Slager’s mother looked at Scott and said that she forgave him.

One of Scott’s brothers said that his brother’s death was the worst day of his life. He said he wants Slager to pay for what he did.

Slager’s parents and his wife also spoke in court. They said Slager had made a mistake, acting out of fear and in the heat of the moment. They emphasized that Slager had served the community for many years as a police officer. They asked for leniency.

Before his sentence was handed down, Slager apologized to each member of Scott’s family by name. He said, “I wish this would never have happened. I wish I could go back to the day and change the events, but I can’t.”

After the trial, Slager’s mother said, “I thank God for all the prayers that went up for our family. My soul is rejoicing right now.”

The shooting of Walter Scott came to national attention after cellphone video footage emerged, showing Slager shooting at Scott’s back. The video went viral; it was viewed millions of times and was a critical piece of evidence during the court case.

Prosecutors asked the judge to sentence Slager to life in prison for the shooting. But the defense argued that Slager should only be convicted of “voluntary manslaughter.” Defense attorneys said Slager acted out of fear and in response to “provocations” by Scott.

On Thursday, Judge David Norton agreed that Slager was guilty of murder. He declined to give him life in prison, handing him a twenty-year sentence instead.

In recent years, there has been a rash of incidents in which police shoot and kill civilians, leading to protests around the country. It is very rare for police officers to be convicted in those cases; most of the time, the jury hesitates to convict a police officer who shoots someone while he is on duty.