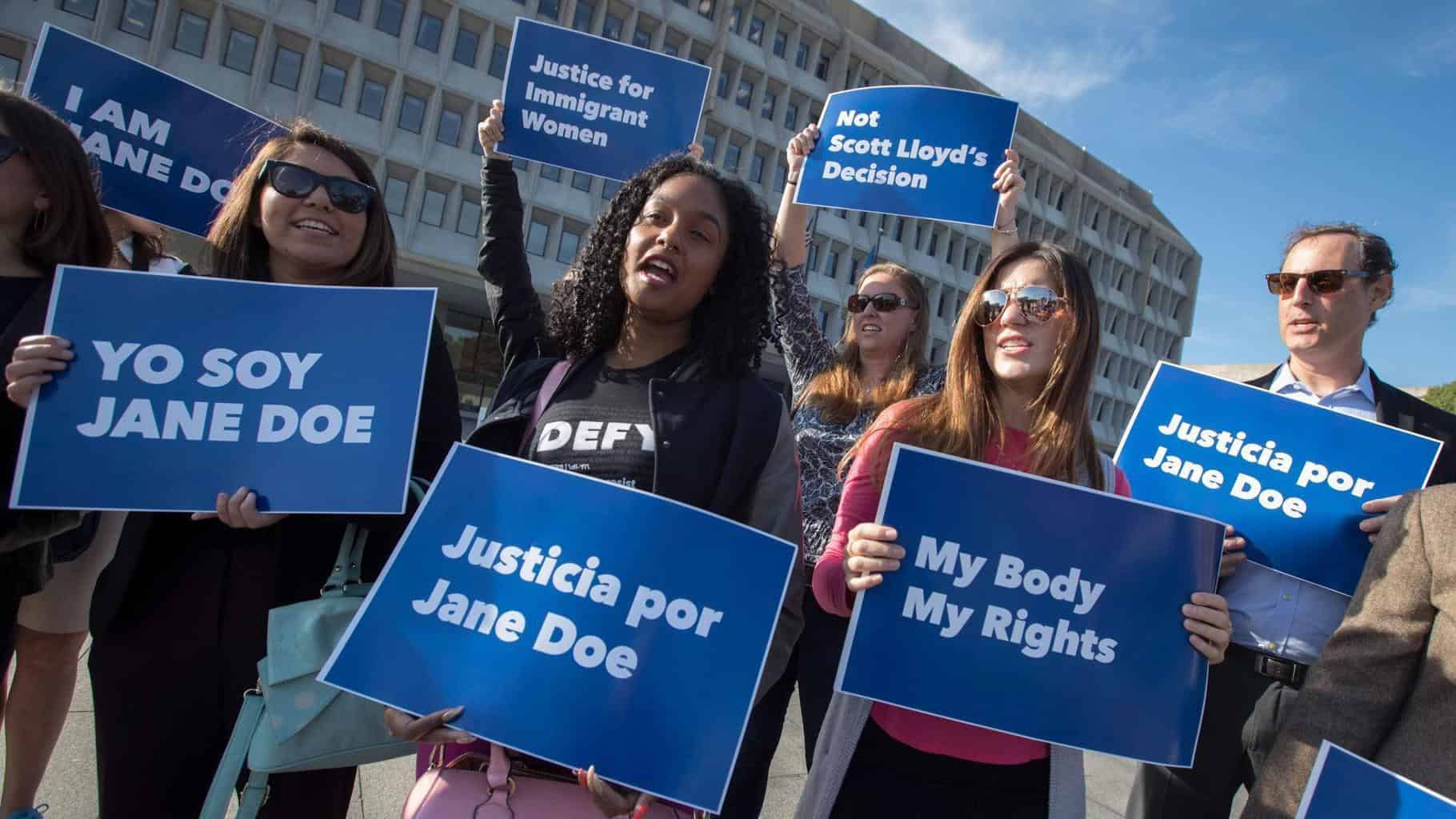 Activists demonstrated in Washington on Oct. 20, 2017, in support of woman's rights to choose

In what is hailed as a giant step in maintaining women’s reproductive liberation, a federal judge ruled early this week that the Trump administration has to grant two 17-year old undocumented, unaccompanied women access to abortion services.

This case is the latest of the recent court battles surrounding reproductive constitutional rights by undocumented female minors and was propelled with the support of the American Civil Liberties Union (ACLU).

Because the three individuals who are the center of this story are minors, they are referred to anonymously as Jane Doe, Jane Roe, and Jane Poe.

Based on court documents, Jane Roe learned about her pregnancy and sought out an abortion three weeks ago while Jane Poe attempted just last week. They were both allegedly prevented from accessing any form of abortion service by their respective detainment centers. So, the ACLU swooped in to challenge the government once again because, due to the nature of the procedure in question, time is of the essence.

Remarkably, the ACLU filed the suit on Roe and Poe’s behalf Friday the 16th of December and a decision was reached the next business day.

These are the second and third of such cases in the last few months. The government lost a case in October when 17-year-old, Jane Doe, was granted the right to obtain an abortion more than 15 weeks into her pregnancy.

Jane Doe was taken into custody at the U.S-Mexican border in early September of 2017. After a routine pre-detainment medical exam, it was discovered that she was pregnant. She subsequently decided to have an abortion. However, as an undocumented, unaccompanied minor, the Trump presidency had other plans for Doe.

Though Doe independently garnered the funds for the procedure as well as permission from a local court to have an abortion as a minor, she was physically not allowed to leave her detention center to go to pre-procedural appointments and the actual procedure. Staff was instructed to keep a watchful eye and were seemingly united in continually attempting to persuade her to continue with the pregnancy.

Doe’s case was especially sensitive because she was detained in Texas where there are onerous restrictions on abortions after 20 weeks and where she is required to go to special appointments prior to the procedure.

Following Doe’s victory, the ACLU seemed had foreshadowed the Poe and Roe case when one of its attorneys remarked “Justice prevailed today for Jane Doe. But make no mistake about it, the administration’s efforts to interfere in women’s decisions won’t stop with Jane.”

The ACLU cites new Trump era policies as the root of this case. The ACLU suit on behalf of the unaccompanied minors found that such individuals would now need permission from the director of the Office of Refugee Services, Scott Lloyd. A public official who has historically personally gotten involved in cases regarding abortion access in the centers under his jurisdiction. Even going as far as to call women to persuade them to not have an abortion according to a VICE News probe.

The argument made by the government is that detention centers should not be expected to facilitate such activities. However, the actual practices of detention workers show an ideological bias. The new policies seem to have encouraged, what some would say, are regressive reproductive practices. For instance, the women at the center of these cases were not allowed to go to abortion clinics, yet they were forced to go to pregnancy crisis centers which are religious based centers focused on persuading women to continue with their pregnancies. Some of their now infamous practices include pretending to be abortion clinics to trick women and forcing hands-on prayer on un-religious women.

These cases have not only sparked a very pertinent debate surrounding the constitutional rights of those who arrive in the United States illegally but have also raised the concern for reproductive rights for female migrants. Almost immediately following the breaking of Jane Doe’s story in September, women and their allies took to the streets in a manner that was reminiscent of the Women’s March of January. And everyone, including the powers that be at the White House, has taken notice.

For some, this is proof that the Trump presidency will continue to be a contentious one for women across the country. Others would hail this these cases as necessary in the fight for pro-life ideals. Both sides do not deny the remarkable nature of these cases.

A new precedent has now been set in favor of immigrants, specifically unaccompanied migrants, and, the Trump presidency has lost yet another ideologically pertinent battle.

The ACLU regards these cases as just the first step to affirming constitutional rights for illegal immigrants and equally vulnerable groups. “

As for the women involved in these cases, Doe was able to receive an abortion in October while Poe and Roe now can do so.

Jane Doe has, while maintaining her anonymity, profusely expressed her contentment with the decision reached. According to a statement released by her guardian and lawyers, she is looking forward to a bright future as a nurse.

“I dream about studying, becoming a nurse, and one day working with the elderly.”