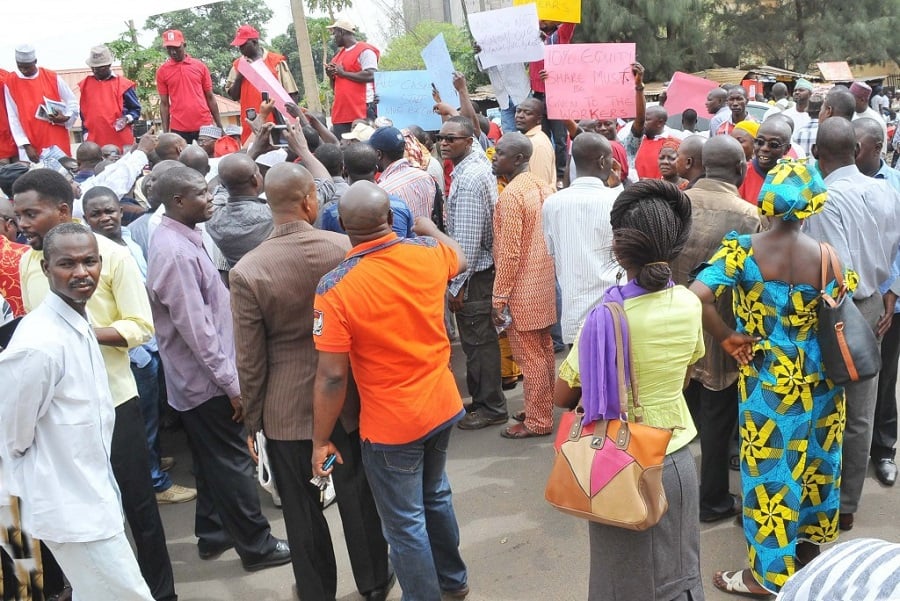 Government workers in states across Nigeria are presently finding it difficult to either feed or meet their obligations to their family members during the Christmas and New Year festivities, as their employers owe them between one and five months salaries.

Some of the workers, who spoke with Caracal Reports in separate interviews, lamented over their predicaments, as they were forced to either borrow from friends or depend on neighbors to take care of families and pay children school fees.

The civil servants are bitter with the state governors because they believed they had denied them of their rights to celebrate the festivities with families, despite the massive resource at their disposal.

Findings revealed that the governors received and shared N609 billion federal allocation and N243 billion Paris Club refund, as they failed to pay the salaries of the workers.

For instance, workers in Ekiti State have blamed their predicaments on Governor Ayodele Fayose, who they claimed to owe them over five months salaries.

“Our situations have been pathetic as most of us depend mostly on friends and churches to feed our families on ordinary days not to talk about Christmas day. The government has failed to pay us attributing the development to economic woes in the state. They claimed the economic woes were caused by the alleged financial recklessness of the immediate past governor of the State and the current Minister of Mines and Steel, Dr. Kayode Fayemi; he decided to tell the world he would sell petrol in the states’ house to residents at N145 per liter.

“We have met the government and other top officials of the Peoples’ Democratic Party controlled state several times but failed to keep its promises but enjoyed telling lies to the world on Twitter. He claimed to be close to the grassroots but failed to pay us what we worked for,” One of the executives of the state’s Trade Union Congress, Mr. Shola Abioye, said.

The workers in Ondo State also shared their part of the frustration as they alleged that Governor Rotimi Akedolu, owes them four months’ salary arrears.

The Chairman of the state’s TUC, Mr. Sola Ekundayo, said, “The workers have yet to receive the salary, but the government promised to pay before the end of the year.

“A great number of the workers have been ejected by the owners of the property they reside while their wards have been sent home from school.”

Findings revealed that some workers in Osun and Oyo States were paid in full for October, while others received only half of their salaries.

A civil servant on grade level 12 in Osun disclosed that many workers were not sure that they would be able to eat a decent meal on Christmas Day, much less buy things for their children.

Workers in Oyo State are also grumbling as the state government had yet to pay their December salary as at December 23, 2017.

The Kogi State Commissioner for Finance, Mr. Idris Asiru, disclosed that the workers in the State, who are owed between five to 20 months’ salary, have been paid a large chunk of their outstanding arrears on December 22, 2017.

“We are only able to pay 60 percent of one month’s salary across the board. It is the sincere hope of the government that through our aggressive drive to increase internally generated revenues, the fortunes of civil servants and all citizens will improve,” he said.

Similarly, some workers in Anambra State said they had yet to be paid their December salary as of Sunday, December 24, 2017, despite the fact that some of their colleagues claimed to have received payment alerts.

However, PDP has blamed the development on President Muhammadu Buhari as it alleged that he caused the current biting economic hardship, which is affecting the states.

According to the National Publicity Secretary, PDP, Mr. Kola Ologbondiyan, the lull was worsened by the acute fuel shortage, all due to the alleged shambolic policies, sheer incompetence, and gross insensitivity of the All Progressives Congress-led Federal Government.

“The nation’s economic situation is a national embarrassment which cannot be glossed with deceit, lies, and propaganda. We urge Nigerians to overcome this very sordid situation by rallying around one another in true love as epitomized in the birth and teachings of the Lord Jesus Christ.

“Indeed, this is the worst Yuletide ever. There is no way one can sugarcoat the fact that the anguish Nigerians face today is because of the incompetence of the APC Government, which has also amply demonstrated that it does not care about the welfare and happiness of the citizens. Our country’s economic situation has astronomically gone from bad to worse in the last two years and painfully, there is no hope in sight under this APC regime.

“As we speak, many families are completely stranded; much more can no longer afford their basic needs. Nigerians have become ravaged by economic hardship because the APC-led Federal Government has abandoned them and refused to channel the abundant resources available in the nation for the good of the people. Instead, they are heartlessly diverting such resources for their selfish political purposes while the people suffer,” he said.

Nevertheless, he said that the Christmas season presents Nigerians very strong lessons in hope and their collective triumph over adverse situations as exemplified in the birth and teachings of the Lord Jesus Christ.

He also called on Nigerians to join hands with the main opposition party to rescue the country in 2019.

“Now that it has become manifest, even by their speeches this season, that those who promised Nigerians El Dorado do not have the littlest capacity to fulfill the smallest of their promises, we as a people must not also abandon ourselves.

“We must, therefore, rise above all divisive ethnic, religious and political considerations and make this season merry by helping and encouraging one another in love,” he added.