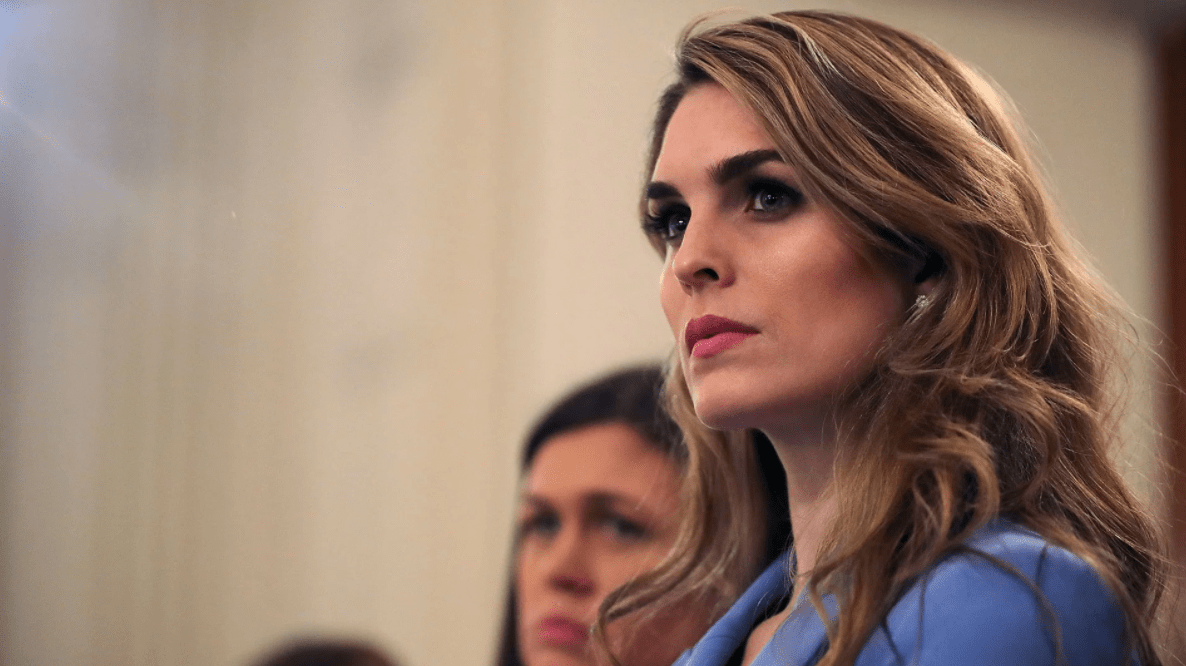 Hope Hicks, one of President Trump’s lone gladiators, announced her white house exit on Wednesday. Hicks, 29 leaves her post as Communication Director under a veil of speculation when just yesterday, during closed-door testimony to the House Intelligence Committee, she acknowledged telling what “amounted to white lies,” on behalf of President Trump.

“She has a grueling and terrible job, and has been thinking about leaving for a really long time… it has been in discussion for a while,” said CNN D.C. Correspondent Maggie Haberman.

Lawmakers on both sides of the aisle attest to Hicks’ unwillingness to answer questions about her time in the White House during as part of the panel’s Russia investigation, though she did answer some questions about the presidential transition, according to lawmakers on the committee.

The New York Times first reported that Hicks admitted to white lies on the President’s behalf.

Hicks’ testimony appeared to be more forthcoming than Bannon’s – who would only respond to questioning in regards to the campaign. Democrats cited Hick’s failure to answer “key questions”.

Adam Schiff, House Intelligence Committee ranking member said Hicks would not discuss, for example, her role in drafting the misleading statement from Donald Trump Jr. about the June 2016 Trump Tower meeting with a Russian lawyer. “All of our questions about what went into that statement went unanswered,” the California Democrat said.

She did tell the committee the first time she learned about the Trump Tower meeting was in June 2017. According to sources, while she was in Trump Tower that day in June 2016, Hicks said, she did not have any awareness that the meeting took place.

Initially, Hicks told the committee she would not discuss the transition at all, citing a White House request, according to lawmakers. But she then agreed to answer some questions about the transition after conferring with the White House, because she had answered them previously before the Senate Intelligence Committee — although Schiff said there were transition questions not asked by the Senate that she still would not address.

Democrats pushed for the committee to subpoena Hicks “on the spot” to compel her testimony, but Republicans did not agree. Schiff said Hicks did not invoke executive privilege, but she said she had been instructed by the White House not to answer the questions. “There’s apparently one rule for Steve Bannon and another rule for everyone else.”

Republicans note Hicks as a different case because she was willing to answer some questions about the transition. “Mr. Bannon was claiming a privilege based on the transition that we were asking what the privilege was and we weren’t comfortable that there was such a privilege,” said Rep. Tom Rooney, a Florida Republican. “Since she has decided to answer questions based on that transition, she cannot be compared to Mr. Bannon, so it’s not the same.”

Rep. Trey Gowdy, a South Carolina Republican, said his issue was more with the White House’s stance on the transition period, rather than with Hicks. Earlier on Tuesday, other Democrats on the committee were also pushing for the panel to subpoena Hicks for not responding to its questions. “We got Bannon-ed,” said Rep. Denny Heck, a Washington state Democrat.

“I have less hope we’ll get to all the answers,” said Rep. Mike Quigley, an Illinois Democrat. “As with anyone who doesn’t answer questions, they ought to be subpoenaed.”

Bannon returned to the committee under subpoena earlier this month to continue his testimony, and he told the panel he had been instructed by the White House to invoke executive privilege on behalf of Trump.

Schiff has called for Bannon to be held in contempt of Congress for refusing to answer questions, as well as Cory Lewandowski. Lewandowski claimed he too was could answer a few limited questions.

Quigley said Hicks had not asserted privilege Tuesday, but she was “following the orders of the White House not to answer certain questions.”

Initially scheduled to appear before the committee last month as part of the panel’s investigation into Russian meddling in the US election, Hicks’ interview was delayed over questions about the scope of her testimony. She also met last year with special counsel Robert Mueller as part of his investigation.

Hicks among the trusted inner circle of Trump’s rank and file, was one of then-candidate Trump’s first hires as he put together an improbable run for the White House. Often during the campaign, she was by Trump’s side and attended most rallies, while she was in frequent communication with other senior officials as they coordinated their efforts to win the White House.

The House panel planned to interview her about any knowledge she had of contact between other Trump associates and Russians.

As a result of her testimony, Hicks opens up to firsthand knowledge on a number of key events which molded the first year of the Trump White House, including being on Air Force One when the initial draft of the misleading statement about Trump Jr.’s meeting with Russians.