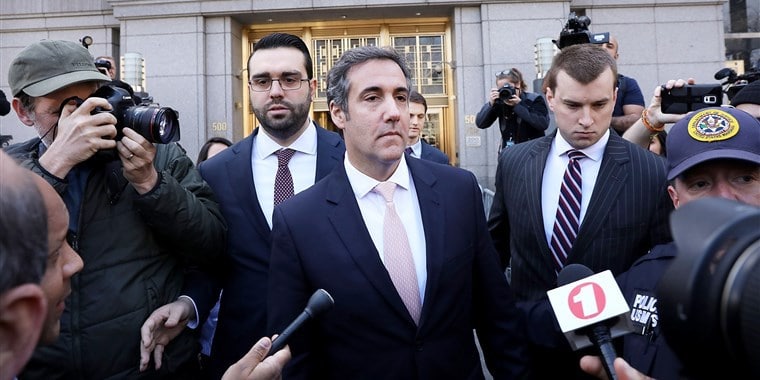 Novartis paid Cohen $1.2 million for healthcare related policy work that he was not able to perform. The company signed a full year contract for $100,000 per month in February 2017.

A month after signing the contract Novartis officials determined Cohen was unable to provide adequate services but continued to make payments to Essential Consultants.

Novartis said, “As the contract, unfortunately, could only be terminated for cause, payments continued to be made until the contract expired by its own terms in February 2018.”

Investigators for Mueller also questioned representatives from AT&T. AT&T may have paid Essential Consultants up to $600,000 prior to the 2016 election.

In an email an AT&T spokesperson said, “When we were contacted by the Special Counsel’s office regarding Michael Cohen, we cooperated fully, providing all information requested in November and December of 2017. A few weeks later, our consulting contract with Cohen expired at the end of the year. Since then, we have received no additional questions from the Special Counsel’s office and consider the matter closed.”

A spokesperson for AT&T said Essential Consultants was one of many firms hired to provide “insights into understanding the new administration.”

In a letter to employees on Wednesday AT&T said Cohen was hired to “to help us understand how the president and his administration might approach a wide range of policy issues important to the company, including regulatory reform at the FCC, corporate tax reform, and antitrust enforcement.”

The Novartis and AT&T payments to Cohen were first disclosed by Stormy Daniels’ attorney Michael Avenatti. In a tweet on Tuesday evening, Avenatti released a document summarizing payments made to Cohen by AT&T, Novartis, Columbus Nova and Korean Aerospace Industries.

NBC News reported on Tuesday that “Avenatti identified eight transactions between January and August 2017, totaling half a million dollars, from U.S.-based Columbus Nova, which he said is controlled by Russian billionaire Viktor Vekselberg and Vekselberg’s cousin Andrew Intrater.”

An attorney representing Columbus Nova said the company is owned by Americans, not by Vekselberg. In a statement, the attorney said, “After the inauguration, the firm hired Michael Cohen as a business consultant regarding potential sources of capital and potential investments in real estate and other ventures.”

Vekselberg was temporarily detained, questioned and searched by agents working for special counsel Robert Mueller earlier this year. Agents intercepted Vekselberg when he stepped off a private plane in New York.

Vekselverg, one of the wealthiest men in Russia, was among oligarchs sanctioned by Trump Administration last month.

In a court filing on Wednesday Cohen’s attorneys wrote, “While much of the information in his ‘report’ is completely inaccurate, Mr. Avenatti has published some information that appears to be from Mr. Cohen’s actual bank records, and Mr. Cohen has no reason to believe that Mr. Avenatti is in lawful possession of these records.”

In response on Wednesday evening, Avenatti tweeted, “They fail to address, let alone contradict, 99% of the statements in what we released. Among other things, they effectively concede the receipt of the $500,000 from those with Russian ties.”