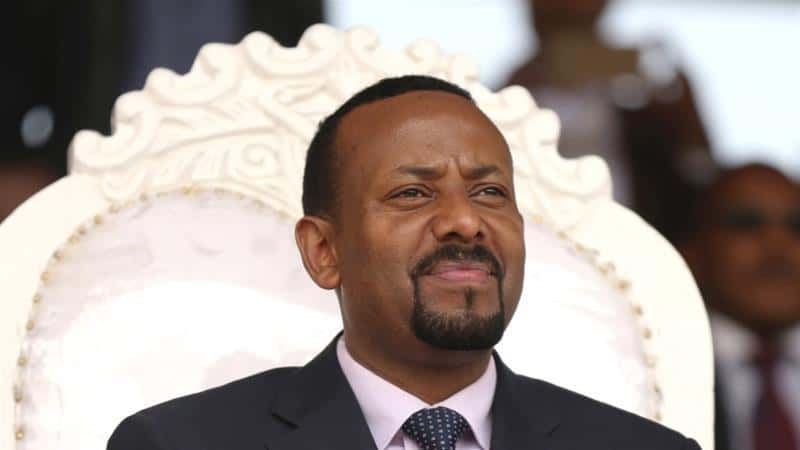 Ethiopia’s Abiy Ahmed may have etched his name on the hearts of many with various sweeping reforms but weekend’s deadly ethnic violence which left many dead shows his government has yet to tackle the Horn of Africa’s prominent problem: Ethnic Divisions.

On Monday, there was a rage among many Ethiopians for the first time, since new Prime Minister Abiy Ahmed assumed power in April.

Many irate protesters thronged the streets to demand justice over the death of about 23 people in a deadly ethnic violence that engulfed the country, weekend. The ethnically motivated unrest was said to have been targeted at minorities in  Oromo heartland, pitched at the outskirts of Addis Ababa, the capital.

The protesters blocked roads and shut businesses as they waved flags and jogged through neighborhoods across Addis Ababa to denounce the weekend killings in the Oromia region’s Bureau district, northwest of Addis Ababa, according to Aljazeera report.

In the unrest, local residents said shops were looted and people attacked by mobs of Oromo youth who stormed through streets targeting businesses and homes of ethnic minorities.

“By nighttime, there were several dead bodies along roads,” he added.

Ethiopian police sources claimed about 200 persons have been arrested in connection with the deadly violent clashes that rocked the country.

Since Ahmed assumed office as new Prime Minister in April, Ethiopia has not remained the same. Before his arrival, the Horn of Africa has been engulfed in a series of ethnic clashes, creating an atmosphere of unrest and a poor economy.

But the Prime Minister has been rewriting the country’s history with sweeping reforms. In the aspect of the economy, the Prime Minister had reversed decades of policy, announcing key state-run industries such as Ethiopian Airlines and Ethio Telecom, the country’s only internet and telephone provider, would be opened up to foreign and private investors. This was even as he had been junketing neighboring countries and the international community to strengthen economic ties.

More so, Ahmed had consistently adopted a reconciliatory strategy to end years of hostilities with neighboring countries, thereby improving political and economic relationships. Such peace overtures include smoothing of relationship with Eritrea, it’s enemy for years over land issues. His move to smoothen relationship Ethiopia’s rough relationship with Somalia also come is also another instance.

While the above reforms hadn’t come without specks of dust from the public, Ahmed had been able to easily weathered the storm.

This, however, has not been the case in ethnically-motivated issues, especially the ongoing controversies in the country over Ahmed’s decision to welcome leaders of Oromo Liberation Front (OLF) a formerly banned rebel group in the country. OLF is an organization established in 1973 by Oromo – Ethiopia’s largest ethnic group- nationalists to promote self-determination for the Oromo people against a perceived Abyssinian colonial rule. The proponents of the movement hold that Amhara hegemony has been oppressing and suppressing the Oromo people and their culture. The movement is the culmination of over 70 years of uncoordinated resistance by Oromos against this condition.

Successive governments in the country had, however, came hard on the movement, alleging it of high-handedness and anti-government and consequently labeled it a terrorist organization. The group was further stung by a ban, with government proscribing its operation in the country.

But last week Saturday, Ahmed had extended his reforms to the movement, inviting the expelled group to the country, fueling a brutal clash that killed many during the weekend.

The recent development has again reawakened the age-long ethnic crisis rocking the country, and so far, Ahmed appeared clueless on how to address the situation. Clashes between Oromos and ethnic Gedeos in the south caused nearly a million people to flee their homes soon after he took power.

Observers note that meeting the demands of the various ethnic groups will be the key to his success in the volatile country.  But how Ahmed, the first leader from the Oromo ethnic group, intends doing this remains unknown.

The circumstances that brought him to power are conspicuous evidence why he should address the growing inter-ethnic clashes in the country. Issues over marginalization, land encroachment of one ethnic group by the other have been the leading causes of the crisis in Ethiopia, a situation which largely forced the resignation of his predecessor, Hailemariam Desalegn in February.

The recent criticisms against him from the rankled protesters is an indication that his popularity and goodwill is likely to reduce, should his government fail to address the lingering ethnic issues in the country.

So far, Ahmed has enjoined massive support from the ruling Ethiopian People’s Revolutionary Democratic Front (EPRDF), the electorates and the global community.

However, the recent unrest in the country means a bungled reforms could see the tide turn against him, especially if he fails to address the ethnic crisis in the country.