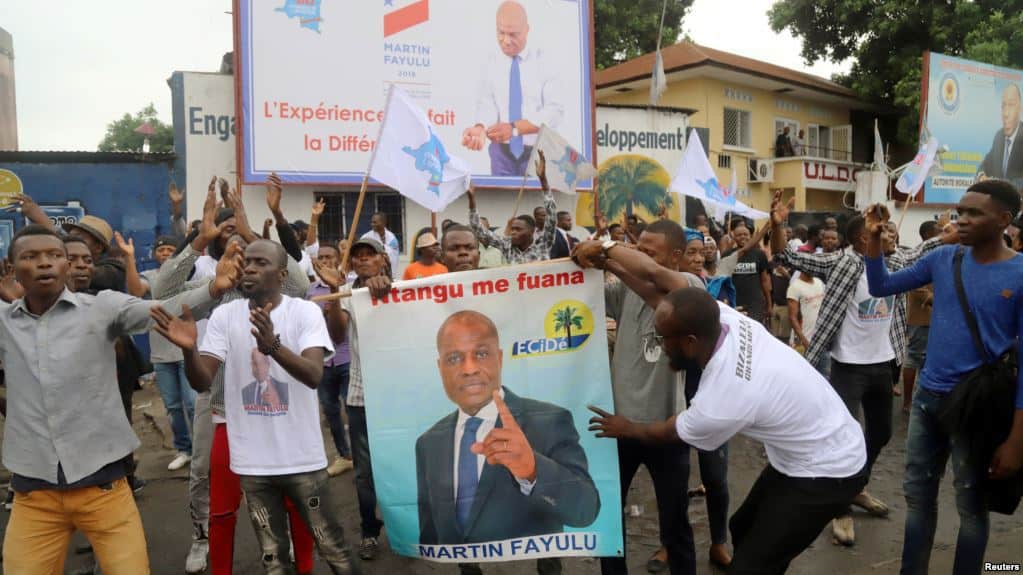 Opposition parties in DR Congo during the weekend made a strong statement to end President Joseph Kabila’s grip on power in the country with the announcement of a consensus candidate Martin Fayulu for the country’s forthcoming presidential polls.

On Sunday, opposition heavyweights in the Democratic Republic of Congo rounded off days of deliberation in Geneva, Switzerland, over which candidate it should pick for the country’s all-important presidential elections slated for December 23.

After a heated, painstaking deliberation, the opposition leaders unanimously selected a prominent legislator, Martin Fayulu as its joint candidate. Political observers see the move as a major boost in ongoing efforts to completely end President Kabila’ stamp on the country’s political power.

Ending President Kabila’s political dynasty in DR Congo is imminent for the opposition – something that is far more likely than not – going by major successes recorded so far. Ferocious protests from the opposition had earlier stopped Kabila’s push to extend his hold on power by introducing some constitutional changes.

President Kabila has been in power since the assassination of his father in 2001. He was officially elected President in DRC’s first democratic election in 2006 since it gained independence from Belgium in 1960. He went ahead to win a controversial election again in 2011, against all the odds.

The President, at first, seemed unruffled, with intense calls against his decision to contest the December elections; having earlier overtly and covertly indicated interest in the polls. On August 8 however- the day DRC’s Presidential hopefuls were expected to submit their files, Kabila’s name was not included- leading to widespread jubilations in Kinshasha, the capital.

While news of Kabila not running for another term in the country’s forthcoming election, reported by CARACAL REPORTS, came as a shock to many Congolese citizens, it looked a major feat to the opposition and other civil society groups who stood against the president’s quest to hang on to power.

The victory could yet be short-lived, should the opposition fail to defeat Kabila’s preferred candidate for DRC’s presidential job- Emmanuel Ramazani Shadary, the country’s erstwhile Interior Minister.

Critics argued that a victory for the former minister signals no clear-cut ideological difference between him and Kabila. Shadary oversaw a period characterized by violent, repression of political protests, the clampdown on opposition supporters and arrest of activists, which made him one of the internationally sanctioned Congolese officials in 2017. Due to this, observers argued, Shadary’s victory will only signal an elongation of what characterized DR Congo during Kabila’s reign.

Under Kabila’s watch, DR Congo has witnessed various clampdowns on those against his government. His administration is also accused of high-handedness. His refusal to relinquish power has created political instability in the country.

Many have argued that opposition’s chances of grinding out a positive result from next month’s election would be determinative of the popularity and perceived credibility of its candidate. And it seemed the opposition is on track with its recent choice of Fayulu, who maintains a high-fanbase in the country.

The 62-year-old was one of the major forces that halted President Kabila’s bid to extend his rule, spearheading demonstrations across the country. His doggedness, to a large extent, shows he remains a major challenger for the country’s next month’s election. Fayulu was arrested several times during opposition demonstrations in Kinshasa and elsewhere, once being struck in the head with a rubber bullet.

Such indefatigable personality, some believed, made him edge out his key contender Felix Tshisekedi, head of the longtime main opposition Union for Democracy and Social Progress (UDPS) party and son of its late founder Etienne Tshisekedi, to emerge the opposition nominee.

Aside from enjoying a huge fan-base, a significant advantage for the opposition at the polls, Fayulu also has the backing of top figures in his camp. He enjoys the support of two heavyweights – former Vice President Jean-Pierre Bemba, who has been barred from standing in the election, and self-exiled ex-provincial governor Moise Katumbi, who says he was prevented from returning to Kinshasa to submit his candidacy.

His foray into the country’s politics kickstarted during a national conference in 1991-1992 that ended the single-party rule of longtime dictator Mobutu Sese Seko in the former Belgian colony. The opposition nominee won his first elective office in 2006 when he was elected to parliament.

Some pundits believe that to stand a chance of winning the forthcoming presidential election, the united atmosphere within the opposition camp must be sustained and Fayulu would be shutting his heart against any cracks some weeks away from the much-anticipated polls.

The opposition would also be banking on the credibility of the country’s electoral body to secure victory at the forthcoming polls. “I’m sure we will succeed in making our country democratic, free and independent,” Fayulu had been quoted as saying shortly after his nomination.

He had maintained such spirit during his days of spearheading protests against president Kabila. “The nomination of Ramazani Shadary does not mean he’s already president. He has to go to the election and win,” the opposition nominee had told Al Jazeera in August.

“I doubt that Mr. Ramazani can win if the poll is serious and credible,” he had added in the interview.

Already, there are concerns over electronic voting machines which are likely to be used during the polls, an initiative, critics see as a ploy to swing the election in favor of the ruling government.

“As we fought for Kabila to step down, we’ll continue to fight to have fair and credible elections,” he added.