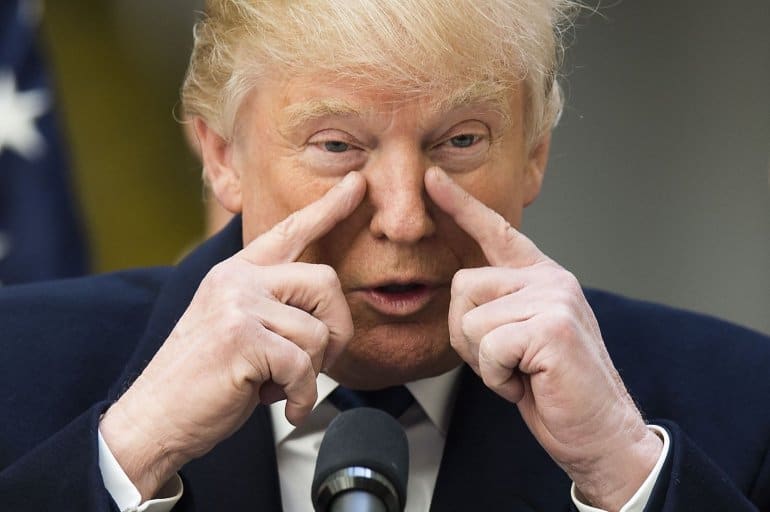 President Trump’s former lawyer and longtime “fixer” Michael Cohen testified for roughly five hours before the House Government Reform and Oversight Committee this week regarding his history with Trump.

In his testimony, Cohen claimed Trump “is a racist…a con man…a cheat.” Cohen said when it comes to Trump, “the bad far outweighs the good and since taking office, he has become the worst version of himself.”

Cohen alleged that Trump once asked him if he could “name a country run by a black person that wasn’t a ‘sh**hole'” while Barack Obama was president and reported Trump told him he didn’t think black would vote for him “because they were too stupid.”

In regards to $130,000 paid to adult film star and alleged former Trump mistress Stormy Daniels, Cohen alleged that Trump was directly reimbursing him for the first year of his presidency for the payment he made to Daniels. He also provided the committee with a copy of a $35,000 personal check signed by the president and claimed the payment was the first of 11.

Cohen also addressed supposed communications between Roger Stone and Julian Assange regarding the WikiLeaks Democratic National Committee (DNC) email dump. Cohen told the Oversight Committee that he was present with Trump when Stone was on speakerphone and claimed he had personally spoken with Assange. Stone provided a statement refuting Cohen’s testimony and may have violated a gag order in his own case by doing so.

In regards to the Trump Tower Moscow Project, Cohen claimed: “Trump knew of and directed the Trump Moscow negotiations throughout the campaign and lied about it.” Cohen said Trump was dishonest about the project because “he never expected to win the election” and because “he stood to make hundreds of millions of dollars on the Moscow real estate project.” Furthermore, Cohen testified that he had briefed Ivanka and Donald Trump Jr. multiple times on the progress of Trump Tower Moscow.

Cohen made additional allegations that Trump had admitted to him that he never had surgery for bone spurs and had thought it would be “stupid” to serve in Vietnam. He also claimed that Trump had directed him to make hundreds of threats on his behalf, including to staff at his colleges and high schools to discourage them from releasing his test scores. Fordham University confirmed that Cohen had made contact in 2015 to threaten legal ramifications if Trump’s grades were released.

Trump Meets with Kim Jong Un, Walks Away With Nothing

Trump hoped to make a deal with Kim which would lead him to denuclearize North Korea. Experts say that Kim would like to see sanctions on his country eased, but does not want to give up weapons of mass destruction to achieve that.

“We had some options, and at this time we decided not to do any of the options, and we’ll see where that goes,” Trump was quoted during a news conference. “Sometimes you have to walk, and this was just one of those times.”

Trump claimed Kim wanted sanctions against North Korea lifted entirely, but representatives from Pyongyang held a press conference to refute that claim and announce Kim only wanted economic sanctions lifted. In exchange, a nuclear facility would be shut down.

North Korea’s Vice Foreign Minister Choe Sun Hui said Trump’s refusal of the deal was a surprise to Kim and the leader “may have lost his will (to continue) North Korea, U.S. dealings.”

Regarding Kim, Trump said during his news conference that he thinks the two will “end up being very good friends.”

After the summit with Kim Jong Un, Trump claimed to reporters that Kim bore no personal responsibility for the death of Otto Warmbier — a U.S. college student who was imprisoned in North Korea in 2016 and died shortly after his 2017 release. “He felt very badly,” Trump said of Kim.

Warmbier was arrested while studying in North Korea on what was supposed to be a 5-day trip. He attempted to steal a poster from a hotel and was sentenced to 15 years of hard labor. While imprisoned for a little over a year, he suffered a massive brain injury and was returned home in a coma in 2017. He died a few days after being reunited with his family.

At least 8 people were killed when Indian and Pakistani soldiers targeted each other’s posts on Saturday in the latest sign of possible impending war between the two countries. Of the latest deaths, 6 were civilians.

An Indian aircraft crossed into Pakistan earlier in the week to carry out a strike against militants blamed for a suicide bombing that killed 40 Indian troops last month. Pakistan then shot down an Indian fighter jet and temporarily held hostage its pilot, who has since been returned to India. The gesture

Tensions between the two countries — which both hold nuclear arms — escalated recently over Kashmir, which is split between them. However, both countries claim ownership of Kashmir as a whole.

World leaders are concerned that if the fighting between the two countries is not soon resolved, the war between India and Pakistan is imminent.