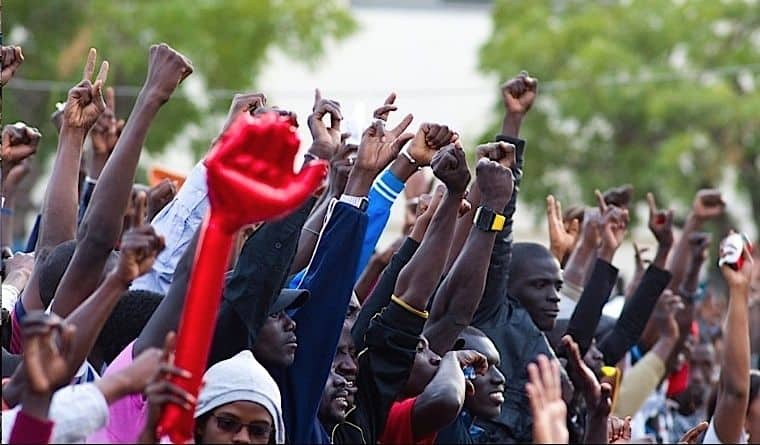 In Africa, where open anti-government demonstrations are shrinking due to increased clampdown from those in authorities, many activists are turning to social media as alternative means to protest against oppressive governments.

The recent arrest and imprisonment of Dr. Stella Nyanzi, a renowned Ugandan lecturer and feminist has sparked widespread outrage over the use of social media for political activism in Africa. Nyanzi was reportedly jailed for writing an alleged offensive poem against the country’s President Yoweri Museveni.

In the said poem, posted on Nyanzi’s Facebook page, she had painted graphically the birth of President Museveni as well as his mother’s vagina, to protest the country’s ordeals under his leadership.

The poem, which has now gone viral, partly reads:

How bitterly sad a day!

I wish the smelly and itchy cream-coloured candida festering in Esiteri’s cunt had suffocated you to death during birth.

Suffocated you just like you are suffocating us with oppression, suppression and repression!

How painfully ugly a day!

I wish the lice-filled bush of dirty pubic hair overgrown all over Esiteri’s unwashed chuchu had strangled you at birth.

Strangled you just like the long tentacles of corruption you sowed and watered into our bleeding economy.

How nauseatingly disgusting a day!

I wish the acidic pus flooding Esiteri’s cursed vaginal canal had burnt up your unborn fetus.

Burnt you up as badly as you have corroded all morality and professionalism out of our public institutions in Uganda.

How horrifically cancerous a day!

I wish the infectious dirty-brown discharge flooding Esiteri’s loose pussy had drowned you to death.

Drowned you as vilely as you have sank and murdered the dreams and aspirations of millions of youths who languish in the deep sea of massive unemployment, and under-emplyment in Uganda.

How traumatically wasted a day!

I wish the poisoned uterus sitting just above Esiteri’s dry clitoris had prematurely miscarried a thing to be cast upon a manure pit.

Prematurely miscarried just like you prematurely aborted any semblance of democracy, good governance and rule of law.

Yoweri, they say it was your birthday yesterday!

How morbidly grave a day!

I wish that Esiteri’s cursed genitals had pushed out a monstrously greenish-bluish still-birth.

You should have died at birth, you dirty delinquent dictator…

You should have died in birth, Yoweri Kaguta Museveni.

While the content of the poem has become a subject of intense debate among many pundits, whether or not the poet actually deserved to be imprisoned for venting her spleen against a government’s alleged insensitivity has engaged the attention of social media activists.

Like Nyanzi, many Africans are now leveraging on the power of the social media to criticize perceived repressive policies of the government and hold their leaders accountable. Many countries in Africa are grappling with various challenges ranging from bad governance, corruption and a system incapable to providing essential needs for its citizenry.

Pundits have continually called for the establishment of critical media outlets in the country to wage against bad leadership in the continent. However, that is seemingly becoming impossible to achieve due to government’s clampdown on media and a concerted move to control what the media dishes out.

Aside move to silence critical media reportage, open anti-government demonstrations are shrinking in the continent due to fear of attack.

Analysts argued that to bring about the desired change in Africa, there is need for the people to protest against unfavourable government policies. “It is the people who will put the politicians in check and because our people are docile, our people allow anything to go, politicians will always take us for a ride,” says Mr. Ambrose Igboke, a Nigerian-based public affairs analyst in a chat with CARACAL REPORTS.

Sudan clearly demonstrates the growing popularity and use of the social media in fighting perceived oppressive government in Africa. The ouster of President Omar al Bashir over his inability to fix the country’s biting economy and years of political instability is symptomatic of surging social media activism in Africa. Social media platforms such as Facebook and Twitter were heavily utilized to mobilize Sudanese nationals in the build up to the President’s ouster. Different hashtags were coined in Arabic and English, one of which is #SudanRevolts.

The post- Bashir era has also continued to witness social media activism in Sudan with many thronging the streets to demand a return to democracy. It is unlikely the demonstrations will thaw until the demands of protesters are met, with many determined to brace the odds.

Nigeria has also witnessed strings of demonstrations fueled by social media activism. The #BringBackOurGirls was perhaps one of the popular examples. The hashtag was used to protest the abduction of over 100 schoolgirls in Chibok, Borno, the hotbed of Boko Haram insurgents in Nigeria. The #BringBackOurGirls campaign, among other factors, led to the defeat of then-President Goodluck Jonathan to the opposition at the 2015 polls- the first time in the country’s democratic history in which the incumbent will lose to the opposition in an election.

His successor, President Muhammadu Buhari is also facing an uphill task from the social media. The President is facing increasing backlash for his inability to address the insecurity challenges confronting the nation, which has led to the death of many and left thousands displaced. Nigeria has also amassed various repugnant tags under his administration. The country is presently the poverty capital of the world with swath of the population wallowing in abject poverty.

The President recently introduced the Rural Grazing Areas (RUGA) scheme as a measure to address the lingering herder-farmers crisis in the country, but the policy has been met with widespread condemnation, with many taking to social media with #NoToRuga hashtag.

Sensing the rage generated by the proposed scheme on social media and the resultant damage such could cause the country, the President had suspended the scheme. Many analysts observe that with such vociferous campaigns on social media against policies perceived to be inimical to the interest of the masses, the people will be able to make their leaders accountable.

Shape of things to come

Social media activism is not new in Africa. The outburst that characterized the Arab Springchampioned by the social media shows the continent boasts of a good history of online activism.

However, recent events are indications that it is gradually becoming more rooted in the continent than ever. With some leaders in the continent developing a thick skin for criticisms, the social media, known for its ubiquity and pervasiveness represents a reliable alternative for the citizens to stage protests against oppressive governments.

The challenge, perhaps, would be for social media activists in the continent to be ready to brace the odds. Already, governments are turning attention to the social media, with a view to regulating it. The shutting down of the internet access in Sudan during the peak of the recent uprising, as well as in Ethiopia after its recent failed coup attempt all paint a gloomy future for social media activism in years to come in Africa.

In 2011, Uganda had introduced The Computer Misuse Act, 2011; a legislation aimed at regulating the thickening presence of social media activism in the country. The country also witnessed a heavy clampdown on social media during the 2016 election. These, among other measures, are part of government’s determination to silence social media activists, a development that has so far been met with defiance.