Protest In South Africa Over Violence Against Women 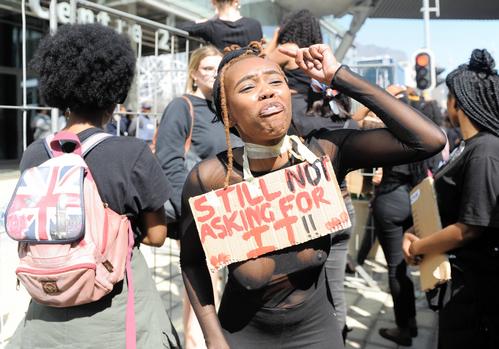 Thousands of activists, clad in dark dresses, moseyed through the streets of South Africa’s Johannesburg Stock Exchange (JSE) to protest the growing incidents of violence against women in the country. The protesters wielded various placards with inscriptions showing growing distaste for the country’s worrying rate of gender-based violence.

According to the country’s police, about 4,000 activists of different shades joined the demonstration. The movement is also generating buzz on social media with the hashtag #AmINext– showing women and girls vulnerability to sexual violence in the country.

The resurgence of demonstrations against sexual violence against women in South Africa was fueled by the recent rape and murder of 19-year-old Nene Mrwetyana, a student of the University of Cape Town, in August. Mrwetyana was last month brutally murdered by Luyanda Botha, a post office worker, who confessed to police during interrogation that he struggled the victim after luring her to a location in Western Cape.

“The pain the women in this country are feeling is palpable. I completely understand the need to be heard. The important point of this though is we the correct business response to what is a complete tragedy for this country. We have committed to take this to big business and devise how to respond appropriately,” she added as some jeered in the crowd,” Aljazeera quoted Nicky Newton-King, JSE’s CEO, as saying while addressing journalists at the scene of .

One death too many

South Africa’s statistics of sexual-based violence and murder generally are startling. The recent demonstration is yet indicative of growing concerns over rising murder cases in South Africa. Official data released on Thursday, penultimate Friday’s demonstration, shows there are enough justification for worry. The police statistics released shows 3.4 rise in crime rate in a year, and a countrywide murder rate of 58 per day.

While most cases of sexual violence, especially against women, go unreported, data by the South African Police Service reveals 4.6 increase in during the period reviewed. In 2016, the World Health Organization (WHO) ranked South Africa as the fourth out of 183 countries with female violence date rate.

The country has been generating international heat following recent clampdown on foreigners in the country by its black nationals. Such statistics portend danger for the country’s already wobbling economic. Already, other African countries, especially those worst hit by the xenophobic attacks in the country are already weighing breaking economic ties amidst other diplomatic sanctions with South Africa if such attacks persist. Nigeria, one of the most affected countries in the imbroglio had ordered its nationals to return home as uncertainties loom.

According to an investigation, 200 foreign nationals have been killed in South Africa since 1994, with Nigerians chalking up majority of the casualties.

Ramaphosa in the spotlight again

South African President, Cyril Ramaphosa faces yet another tough test again in the wake of the growing demonstrations against murder and gender violence in the country. Most of the demonstrators on Friday hurled insults at the Ramaphosa led-government for not doing enough to curb murder and gender-based violence in South Africa. Many have called for tougher laws against perpetrators of such acts, though there is skepticism such measure would bring about the desired result.

Much of South Africa’s unrests in times owed much to thickening economic hardship in the country, with rate currently at 29 percent. South Africa’s economy provides for little optimism with a growth projected for 2019. Ramaphosa would be expected to thinker policies capable of charting a new course for the country.

“I condemn the violence that has been spreading around a number of our provinces in the strongest terms. I’m convening the ministers in the security cluster today to make sure that we keep a close eye on these acts of wanton violence and find ways of stopping them. The people of our country want to live in harmony; whatever concerns or grievances we may have, we need to handle them in a democratic way. There can be no justification for any South African to attack people from other countries.”

But many international activists condemned the President for playing to the gallery with no concerted efforts to completely stamp out the issue.  Ramaphosa’s infamous response was least expected, given his mouthed stance in completely erasing racism in South Africa. Beyond a typical diplomatic and image redeeming message lacking in-depth and intensity circulated on his Twitter handle, Ramaphosa had yet to explore any stringent measure capable of dousing the situation in the country to preventa similar occurrence in the future.

Such criticisms are thickening given the support of Nigeria and other African countries offered South Africa during the struggles to end apartheid regime in the country. Nigeria was one of the leading African nations that helped stopped the apartheid regime in South Africa, providing over $61 billion between 1990-1995 to foster sanity in the country.