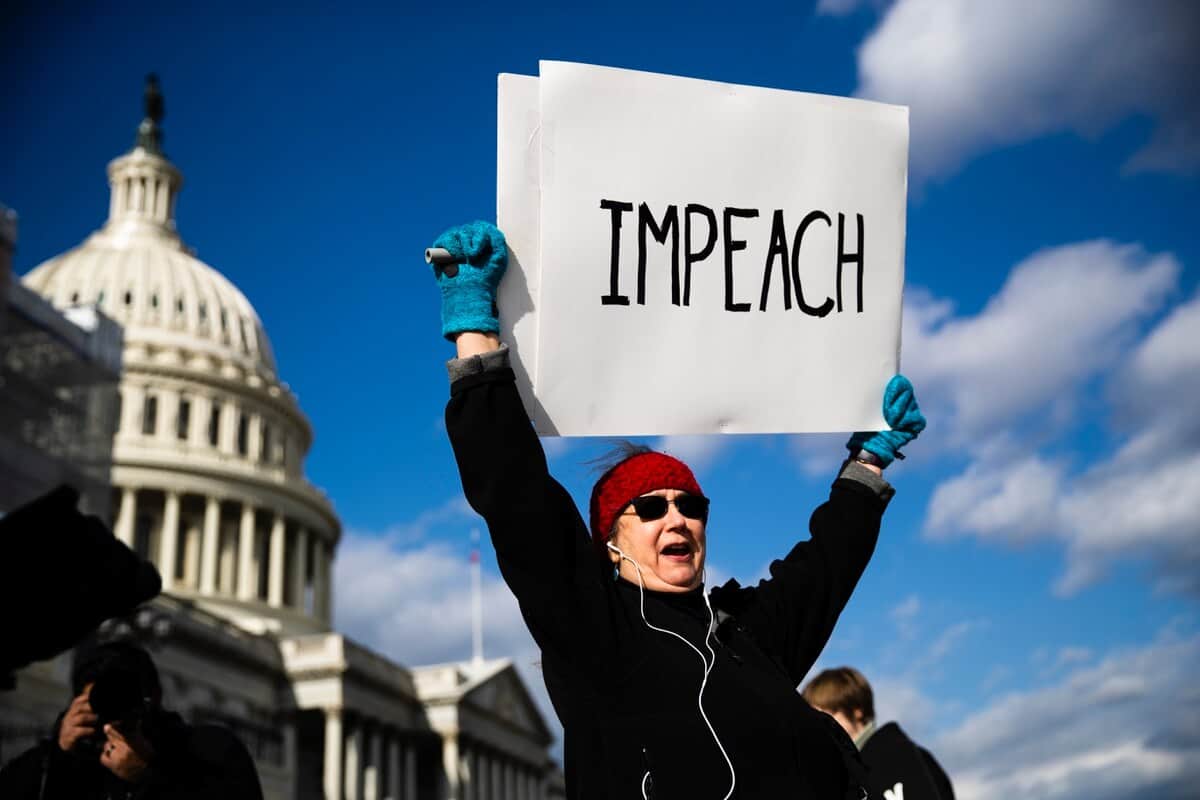 The articles of impeachment have been delivered to the Senate and the trial against President Trump will begin on Tuesday. Trump will not take an active role in his own defense during the trial, though he is expected to give plenty of public comments.

Democrats will present their arguments supporting articles of impeachment, followed by Trump’s legal team, including defense attorney Alan Dershowitz and former independent counsel Ken Starr, who will likely argue that the charges against Trump are not impeachable — even if he is guilty.

Trump’s legal team responded to a trial summons from the Senate by saying, “The articles of impeachment submitted by House Democrats are a dangerous attack on the right of the American people to freely choose their President.”

The Senate trial will be televised and is anticipated to have an audience of millions.

The Government Accountability Office (GAO), a government watchdog, declared this week that the Trump administration broke the law by withholding Congressionally approved aid to Ukraine. According to their decision, the President is not allowed “to substitute his own policy priorities for those that Congress has enacted into law.”

The group determined funds were withheld “for a policy reason, which is not permitted under the Impoundment Control Act (ICA),” a 1974 federal law that regulates the role of Congress in the US budget process. Their ruling is that the White House did not notify Congress before withholding previously approved funds as is required by the ICA and therefore broke the law.

The White House, of course, challenged the GAO’s ruling and accused the group of seeking media coverage. Democrats welcomed the group’s opinion to support their argument for impeachment.

As the articles of impeachment of President Trump is moved to the Senate, Ukraine has announced they will be opening a federal criminal investigation into whether former US ambassador to Ukraine Marie Yovanovitch was illegally monitored by the US government. Evidence suggests Yovanovitch was under surveillance while Pres. Trump was allegedly attempting to secure favor from the Ukrainian president.

Yovanovitch eventually testified in the House impeachment trial against Pres. Trump, providing incriminating information that was not previously public.

Documents revealed messages suggesting Rudy Giuliani and associates conspired to monitor Yovanovitch and inevitably get her fired. She was removed from her position following a smear campaign led by Trump and Giuliani.

The US Secretary of State Mike Pompeo on Friday told conservative radio host Tony Katz in an interview that his Department also investigates the matter “We will do everything we need to do to evaluate whether there was something that took place there,”

The Russian government from Prime Minister down resigned last week, seemingly to support policy changes suggested by Russian President Vladimir Putin. Many speculate Putin’s interest in maintaining power beyond 2024 when he would otherwise leave the presidency.

The current Russian constitution does not allow a president to serve more than two terms. Putin’s proposal strengthens the role of State Council, where some believe he intends to move once he is no longer president.

A new North American trade agreement known as USMCA was overwhelmingly passed in the Senate with a final vote of 89-10. The new deal modifies the rules of trade between the US, Mexico, and Canada and will replace the North American Free Trade Agreement (NAFTA).

The vote of approval came just before Trump’s impeachment trial opened and helped him fulfill a campaign promise to rewrite NAFTA.  Trump was concerned that the impeachment would overshadow the accomplishment. “The USMCA will probably be second to this witch hunt hoax,” he said.

Days before six Democratic candidates took the stage for another debate, a report was released claiming Sen. Bernie Sanders told Sen. Elizabeth Warren during a private conversation in 2018 that a woman could not defeat Trump in the presidential election.

The two disagreed: Sanders denied saying such a thing and referred to a decades-long history of supporting women in positions of power. Warren reiterated that they had disagreed on whether or not a woman could defeat Trump, implying Sanders was not being honest. Notably, all of the anonymous sources involved reportedly spoke with Warren about the conversation.

CNN faced backlash for siding with Warren when a moderator asked Sanders if he had said what he was accused of but dismissed his attempted refutation to ask Warren how she felt when Sanders did say it. After the debate, Warren directly confronted Sanders, who had attempted to extend a hand to her as she approached him, in a heated interaction that was caught on microphone. Warren accused Sanders of calling her a liar on national television and Sanders responded by saying she had called him a liar, but the two agreed the conversation should be had in private.

Both candidates already seem ready to move on. They each will be required to sit for the Senate impeachment trial and will continue campaigning in Iowa and New Hampshire.

Rain in Australia Brings Some Relief from Bushfires

Rainfall has provided some aid in the containment of Australian bushfires, though it has had minimal effect on extinguishing fires in some parts of the country. The rain has also helped to disperse thick smoke which threatens air quality in cities like Melbourne.

The rain welcomed gleefully by Australians, is the first substantial precipitation in months for some areas which have suffered severe drought and intensified fire conditions. More rain is anticipated for the weekend.