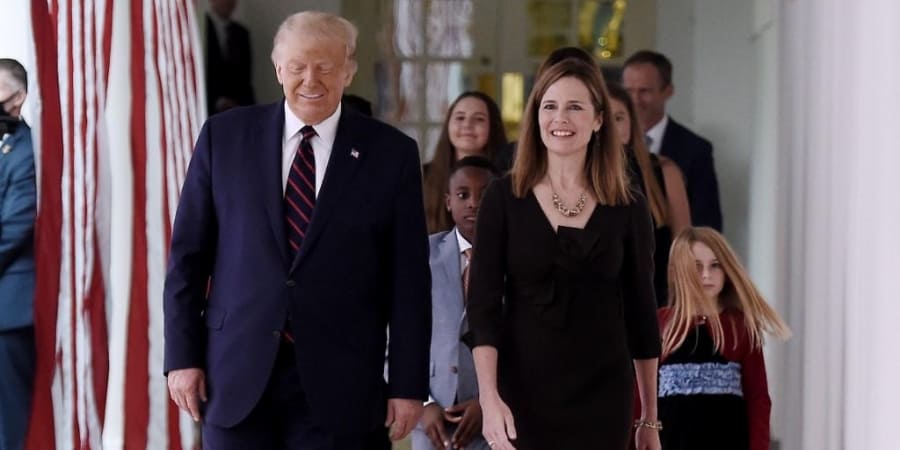 On Monday, the Senate confirmed Judge Amy Coney Barrett to the Supreme Court with a 52-48 vote that mostly followed party lines. She will fill the seat of late Justice Ruth Bader Ginsburg, who passed away on Sept. 18.

Republican Sen. Susan Collins of Maine joined the Democrats in voting against Barrett’s confirmation. Collins made clear to reporters as early as September that she “did not think there should be a vote prior to the election.”

Barrett has identified herself as an originalist, or someone who believes the Constitution’s “meaning doesn’t change over time,” in her own words. She feels her role as a judge is to decipher and uphold the intentions of the authors in effecting the original document.

Astonishingly, Barrett only served as a judge for three years before being appointed to fill a SCOTUS seat for the rest of her life.

The nation’s highest court is now configured with a 6-3 conservative majority, which Democrats fear will have grave consequences for the Affordable Care Act and possibly Roe v. Wade.

Walter Wallace Jr. shot to death by police in Philadelphia

On Monday, police responding to a call for a man with a weapon in Philadelphia shot and killed 27-year-old Walter Wallace Jr., prompting protests and chaos in the city.

Wallace, a recently married Black father, was reportedly medicated for bipolar disorder and having a crises when his family called to request an ambulance. Two police officers arrived on the scene where they found Wallace with a knife, and according to witnesses, they drew guns on him immediately.

The family’s attorney reported having seen body cam footage and claimed Wallace did not make any sudden moves towards the officers, though he did not comply with their requests to drop the knife.

One of the officers eventually gave the order to shoot and they both opened fire, striking Wallace at least 14 times as his family watched in horror. He was pronounced dead at the hospital.

The family has publicized that they do not wish to press charges. According to their attorney, this is because the officers “were improperly trained and did not have the proper equipment by which to effectuate their job.” Philadelphia’s police commissioner said that the officers were not carrying stun guns.

Protests erupted in Philadelphia, as has happened in cities across the US since the May death of George Floyd. The mayor announced a curfew, which was lifted and subsequently reinstituted for the weekend.

Related to the protests, two men were charged with multiple misdemeanors and felonies in connection with a van found by Philadelphia police. Pennsylvania Attorney General Josh Shapiro reported that the men were transporting dynamite and other weapons and tools.

Shapiro said the men were attempting to “take advantage of lawful protests as an opportunity to sow chaos.”

On Saturday, UK Prime Minister Boris Johnson announced England will be going into a national lockdown for the second time to prevent a “medical and moral disaster” for the National Health Service (NHS).

Johnson cited statistics that suggest without another lockdown, daily death tolls will grow even higher than their previous highest. He noted that some hospitals in England would be so overburdened they would quickly reach capacity.

The lockdown does not impact schools and universities, but pubs and other non-essential shops will have to close for four weeks from Thursday.

Super typhoon lands in the Philippines

Almost a million people have been evacuated from their homes and Typhoon Goni (or Rolly) has made landfall in the Philippines. The storm is the most powerful in the area since a 2013 typhoon killed thousands of people and left millions displaced.

Preparations for the storm were impacted by Covid-19, which has killed over 7,000 people in the Philippines. Patients infected with the virus are reportedly staying in large isolation tents currently but may need to be moved due to flooding.

The Philippine Atmospheric, Geophysical and Astronomical Services Administration (Pagasa) called for “catastrophic violent winds and intense to torrential rainfall” in the 12 hours following the storm’s landfall.