The Myanmar Protest And The Power In Solidarity 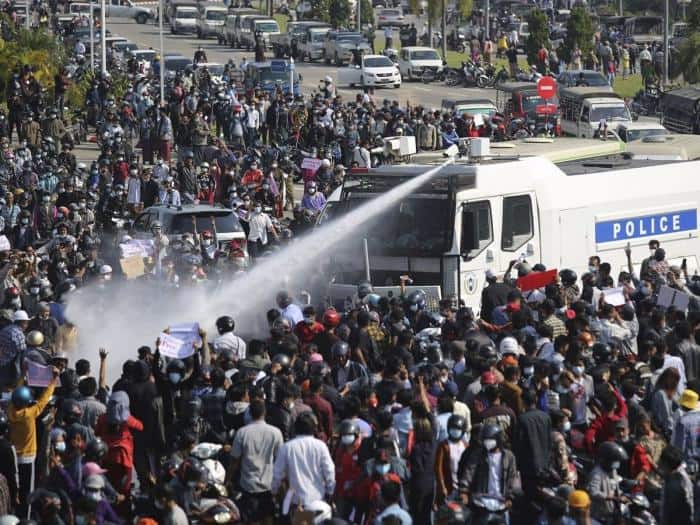 A sea of bodies is spreading across the country in Myanmar in the largest protest the country has seen since 2007. Thousands of activists in Myanmar are striking against the military coup.

Senior General Min Aung Hlaing, the man responsible for the order to seize power in a coup, addressed the country Monday for the first time since the coup, which started early in February.

One theory for why the military staged the coup is that Min Aung Hlaing and others were worried about Aung San Suu Kyi’s plans and her NLD party to bring in major reforms. The NLD had tried to change the constitution before, which was stopped by the military’s which has a 25% hold on parliament.

The coup comes after weeks of the Tatmadaw claiming a rigged election and arresting Elected Leader Aung San Suu Kyi.

The rivalry between the Myanmar military and Former State Counsellor Aung San Suu Kyi, who is leading Myanmar’s pro-democracy movement, has been rising for years. Aung San Suu Kyi has the overwhelming support of Myanmar voters, won two free elections (one in 2015 and one in 2020) in a row, and earned recognition as the opposition’s face.

Aung San Suu Kyi won by over 80% of the vote in November 2020. The military has claimed the election was fraudulent and arrested Elected Leader Aung San Suu Kyi, and members of her party, seizing control and declaring a year-long state of emergency.

A Comparison to the Tumult in Hong Kong to Myanmar Protest

In 2019 the people of Hong Kong began protesting in record-breaking numbers. Hundreds of thousands of Hong Kong activists demonstrated to fight to preserve the freedoms of Hong Kong citizens and to protest China’s power over Hong Kong. According to the New York Times, over a million people marched on June 9, 2019, and nearly two million in a second June march.

The political demonstrations were triggered by a bill proposed by Hong Kong’s government in 2019. The bill would allow Hong Kong to transfer suspects of crimes to Taiwan and mainland China. According to protesters and human rights experts, the extradition law threatened Hong Kong’s liberties.

“Where there’s no fair trial, there’s no humane punishment, and there’s completely no separation of powers,” Pro-democracy legislator Claudia Mo told Vox in 2019.

Tensions between Hong Kong and Mainland China are deeply rooted in a complex political relationship. The extradition bill, according to protestors, threatened to give China more power over Hong Kong.

In November 2019, pro-democracy candidates won the majority of seats in local district council elections. This was a win for Hong Kong’s movement, and protests subsided for weeks while democracy supporters celebrated. Protests briefly restarted before coming to a halt in response to the coronavirus.

There have been some smaller demonstrations since the pause in response to the pandemic, but the threats to civil liberties denounced by protestors have remained largely unresolved.

What are the differences and similarities between the Myanmar protests and the Hong Kong protests?

The pro-democracy protests may have inspired some Myanmar protesters in Hong Kong.

According to Reuters, some Myanmar protesters have used protest tactics and utilized organizational hashtags borrowed from Hong Kong campaigners.

“There’s power in solidarity,” a Hong Kong activist told Reuters. Social media platforms allow pro-democracy advocates in both countries to support one another, which may be why the military in Myanmar has countered protests by shutting down the internet.

Hong Kong and Myanmar are engaged in a struggle with their governing bodies for the same thing: civil liberties. Beijing has tightened its grip on Hong Kong in recent years, while Hong Kong continues to fight for democracy.

Likewise, Myanmar’s history is one of a struggle for freedom. Myanmar suffered fifty years under military rule and overcame that rule to vote in pro-democracy leader Aung San Suu Kyi. Therefore Myanmar may have an advantage against the newly staged military coup: it’s been through this before.