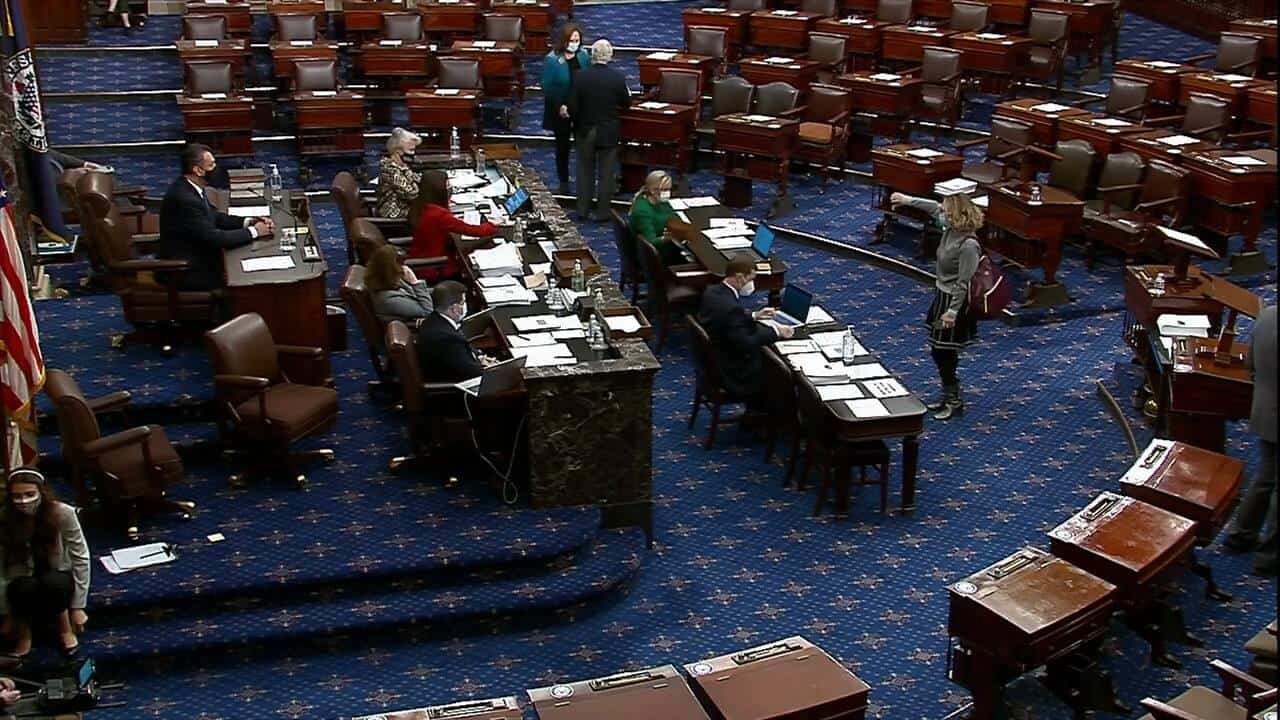 Democratic Sen. Kyrsten Sinema of Arizona made an exaggerated thumbs-down gesture in opposition of a $15 federal minimum wage on the Senate floor. Meanwhile, two Democratic senators from Delaware, Chris Coons and Tom Carper, teamed up to give their thumbs-downs together.

A total of eight Democratic senators voted against the hike, which was enough to block it from being included in the COVID relief bill. The amendment to increase wages was championed by Sen. Bernie Sanders of Vermont, who is an Independent.

The theatrics landed Sinema in particular under heavy scrutiny, in part because she has championed the wage increase for years. She also reportedly brought a large chocolate cake for staffers to the occasion, drawing comparisons to the “let them eat cake” quote, famously attributed to Marie Antionette.

Furthermore, Sinema was found to be the senator among that group with the most constituents who would have received wage increases.

A spokesperson for Sinema provided HuffPost with the following statement regarding criticisms over her behavior: “Commentary about a female senator’s body language, clothing, or physical demeanor does not belong in a serious media outlet.”

According to a new report from the Pew Research Center, about 40% of non-retired adults in America “say the economic impact of the coronavirus outbreak will make it harder for them to achieve their long-term financial goals.” Furthermore, more than 40% of those people anticipate taking at least three years to rebuild their pre-pandemic financial security. Roughly 10% feel that they will never recover.

Lower-income adults, Hispanics, Asians, and people under the age of 30 were found to be most heavily impacted. Individuals from within these groups were most likely to report loss of income for themselves or someone in their household, to have missed or postponed payments, or to have taken on new debt since the beginning of the pandemic.

In Myanmar, an official from ousted de facto leader Aung San Suu Kyi’s party died in custody on Sunday. Officials returned the man, U Khin Maung Latt, to his family and said he died after fainting, but witnesses claimed he was beaten during a brutal interrogation.

At least 70 people were arrested on Sunday in what became the most widespread demonstrations since the military coup began in February. Security fired stun guns and tear gas to disperse a crowd of tens of thousands of people who had gathered for a sit-in.

On Wednesday, a 19-year-old protester named Kyal Sin was killed after security forces opened fire on crowds. Sin, also known as Angel, wore a shirt that said ‘Everything will be OK’ and was one of 38 protesters killed on Wednesday. Authorities inevitably freed security forces of blame in her death by concluding that she was shot from behind while the security teams were to her front. However, photos allegedly showed Sin with her head turned away from the forces just prior to being shot in the back of the head.

Aung San Suu Kyi was seen for the first time since being arrested over a month ago. She appeared in court on Monday and now faces two additional charges, one related to her alleged ownership of illegal walkie talkies.

The United Nations reports that more than 50 people have been killed during protests. Major trade unions have now called for a total strike to shut down the economy in support of the campaign against the coup.

In spite of opposition from every Republican in the Senate, President Biden’s $1.9 trillion COVID-19 relief bill passed. The bill will return to the House of Representatives and is expected to receive approval.

President Biden said he hopes for a quick approval from the House so that he can sign the bill into law. He added the IRS will begin distributing payments later in the month if the package passes. It allots $1400 payments to individuals and couples under certain income levels and provides nearly $50 billion to expand COVID research and testing.