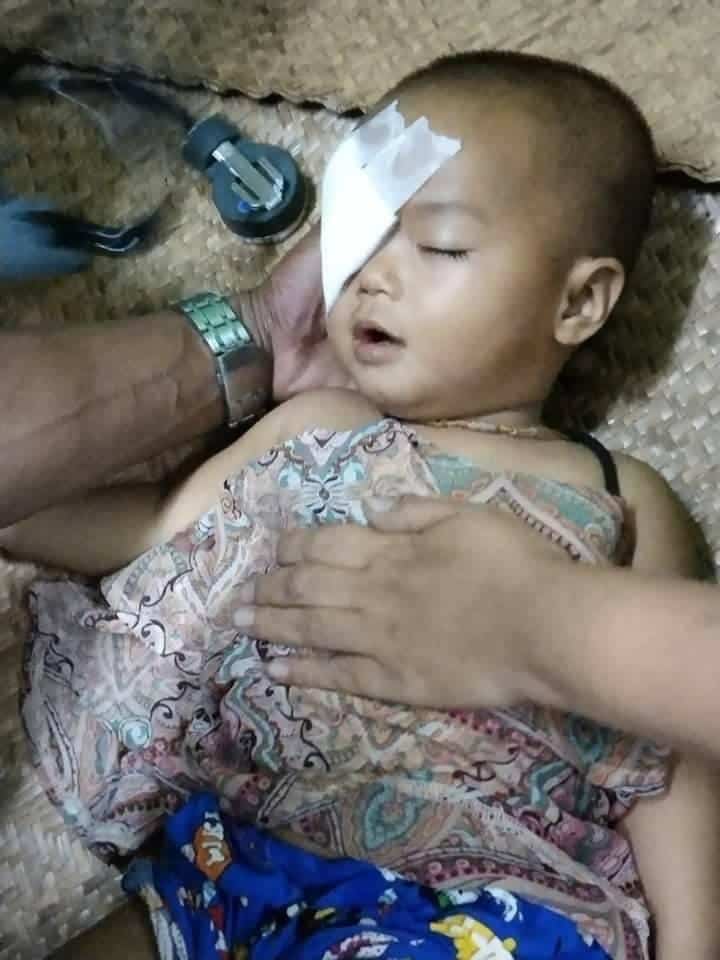 An infant in Myanmar receives care after being shot in the eye by a rubber bullet fired by armed forces.

According to local media outlets, armed troops killed at least 114 people across 40 cities in Myanmar on Saturday. Among the dead was a 13-year-old child, one of 20 minors who have been killed since the military began a brutal pushback against protests last month.

The security forces are part of the junta, a name for the military officers who seized power. At the same time the leader of the coup was giving a speech promising military protection for the citizens of Myanmar, armed forces were shooting and killing groups of citizens for protesting.

Saturday was the deadliest day of protests since the start of the coup, bringing the total death toll to more than 400 people. Witnesses reported that once the military arrived on their streets, they began shooting at random. A father of four was reportedly burned alive after being shot in the chest.

The U.S. and Britain announced sanctions meant to impact the military’s economic interests on Thursday. While the world was left horrified and leaders collectively condemned the events which unfolded on Saturday, military officials did not comment. They attended a lavish dinner party that evening, a clear indication that they are unremorseful and unrelenting.

COVID Spike Still a Concern in the U.S. and Around the World

Though almost 15% of the total population of the U.S. is now fully vaccinated against COVID-19, cases, and of course deaths, are again on the rise in many states. CDC Director Rochelle Walensky said on Friday that she is “deeply concerned about this trajectory.”

Brazil is now a global hotspot, though the U.S. still leads the world in virus deaths with more than 30.2 million since the country’s first case was reported just over 400 days ago. Research from Johns Hopkins shows a significant decline in newly reported U.S. cases throughout February, but a continued upswing over the last weeks.

Research is still being conducted on whether or not vaccinated people can spread the virus or whether they achieve “sterilized” immunity. Dr. Anthony Fauci said the hope is that question will be answered, “within the next five or so months.” However, he told CNN in November, “I would recommend to people to not abandon all public health measures just because you have been vaccinated.”

State Rep. Park Cannon was reportedly arrested for knocking on Kemp’s door during the meeting in an attempt to argue for more transparency from the governor around the signing of the bill. She was removed from the building and placed in a police car, in spite of identifying herself as a state representative several times.

Georgia State Patrol said Cannon was arrested after passing a barrier which was marked “Governor’s Staff Only.” They cited obstruction as their reasoning, due to her knocking on the door after being warned of arrest. She was taken to jail and charged with obstruction of law enforcement and disrupting a session of the Georgia General Assembly.

The bill will require mail-in voters to provide documentation to verify their identities other than just a signature. It shortens the duration of time in which people have to vote and prohibits the distribution of food and drink to people waiting in voting lines. Georgia voters often wait in long lines for hours to vote.

President Joe Biden called the bill “sick” and said the Justice Department is “taking a look” at what can be done. “This is nothing but punitive, designed to keep people from voting” he added. Democrats say the law will disproportionately impact Black voters, likening it to Jim Crow laws.

Kemp defended the bill as making it “easy to vote and hard to cheat” in Georgia, stirring speculation that the action is a nod to baseless claims of election fraud made by the former president.