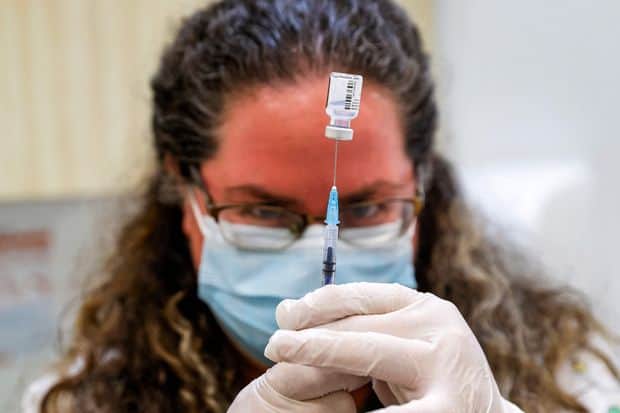 Governments and city officials are reinstating mask mandates and varying degrees of lockdowns as the prevalence of the Delta variant increases across the globe. The newest COVID-19 variant poses a unique threat to re-opening procedures due to its grave potency compared to previous strains.

In Sydney, Australia, video surveillance revealed that transmission of the Delta variant may be as simple as a 5 to 10-second encounter. Cases have been causally linked to people merely walking by each other in an indoor shopping area.

According to Michael Plank, a professor and data-modeling expert at the University of Canterbury in New Zealand, the variant is especially dangerous because of its tendency to grow exponentially.

“After just three chains of transmission, there would be eight times as many cases on average,” he said. “So, where the original variant might have caused 10 cases, the delta variant could cause 80 cases in the same time, which would quickly make it impossible to control without a lockdown.”

Moreover, a recent Scottish study found a correlation between Delta-variant cases of COVID and hospitalization, suggesting an increase in symptom severity. Compared to the Alpha variant, the risk of admission was approximately doubled.

“Six hundred thousand-plus Americans have died, and with this delta variant, you know there’s going to be others as well,” said President Biden during an address in North Carolina. “You know it’s going to happen. We’ve got to get young people vaccinated.”

All over the world, countries are scrambling to respond to the rapid rise of Delta-variant cases. The United Kingdom has struggled with the dominating strain for over a month, providing insight into the new variant’s nature and potential consequences.

In the last month, their daily average of COVID-19 cases soared from 1,500 to 9,200, with hospitalizations doubling. As a result, re-opening plans were delayed by four weeks, and social distancing and capacity restrictions have been extended until July 19.

Last Saturday, Britain’s health minister, Matt Hancock, resigned after photos of him violating social-distancing guidelines came into the public light. Sajid Javid, former Home Secretary and Chancellor of the Exchequer will replace Hancock and serve as the Secretary of State for Health and Social Care.

In Australia, Sydney and surrounding areas entered a strict two-week lockdown on Saturday, June 26 in response to a quickly spreading Delta-variant outbreak. Until July 9, citizens may only leave home for essential work, medical care, education, and shopping.

Throughout the pandemic, Australia has relied heavily on prompt outbreak response through border closures, contact tracing, hard lockdowns, and compliance with social distancing measures. Despite low vaccination levels, the country has been praised for its relative success in pandemic management.

In Thailand, Bangkok and neighboring provinces are subject to a month-long limited lockdown. Other nationwide lockdowns include Malaysia and Bangladesh. Israel, which was previously commended for its COVID control, reinstated an indoor mask mandate that they had dropped only two weeks prior.

Moreover, numerous countries reinstated travel restrictions over the weekend, limiting intake from “virus-variant zones.” Some regions, such as South Africa, also have limited domestic travel to slow down the aggressively spreading variant.

Prevalence of the Delta variant has doubled in the United States over the past few weeks and will soon become the most dominant strain. Cases in Nevada have tripled, accounting for nearly half of all cases, and worried officials in Los Angeles County have reinstated mask regulations for public indoor spaces.

“The Delta variant is currently the greatest threat in the U.S. to our attempt to eliminate COVID-19,” said Dr. Anthony Fauci.

Medical professionals estimate that COVID-19 vaccines will effectively protect against current and future powerful variants, and available studies seem to support such claims.

Dr. Jerome Kim, director-general of the International Vaccine Institute, said, “At least for those vaccines approved in Europe and North America, in the case of the variants, these seem to be effective in preventing severe disease, hospitalization, and death.”

Moderna stock increased after they released internal findings concluding that the Moderna shot produces antibodies against the Delta variant.

“We remain committed to studying emerging variants, generating data, and sharing it as it becomes available. These new data are encouraging and reinforce our belief that the Moderna Covid-19 vaccine should remain protective against newly detected variants,” CEO Stéphane Bancel said in a statement. “These findings highlight the importance of continuing to vaccinate populations with an effective primary series vaccine.”

In addition to the spreading Delta, the variant is an even more concerning Delta-plus variant. Like Delta, Delta-plus is highly contagious; however, it also has characteristics from South African and Brazilian variants that make it harder for antibodies to block it from entering cells. Thus, according to the World Health Organization (WHO), vaccines are insufficient for reducing transmission.

Though vaccines provide pertinent protection from the Delta variant, distribution remains an overwhelming concern. Individuals are not fully protected until two weeks after their second shot, and most regions have not obtained a protection level that can adequately prevent variant exposure and spread.

Aside from Gibraltar, there are no countries with more than 70 percent of the population fully vaccinated, and the most populous countries currently hover around 50 percent. In addition, despite the relatively high number of distributed vaccine doses, only 47 percent of the United States population is fully vaccinated. Thus, there are still more than enough susceptible people worldwide for the Delta variant to cause undue harm.

“The problem is you’re really not protected until you’ve gotten both doses of the vaccines and you’ve waited two weeks afterward,” said Dr. Jill Weatherhead, assistant professor of tropical medicine and infectious diseases at Baylor College of Medicine. “That’s why it’s so important to get vaccinated now, before [delta] becomes the dominant variant circulating.”

WHO Encourages Mask Use For All

According to the Centers for Disease Control guidelines, fully vaccinated individuals can resume pre-COVID activities and mannerisms unless state or local regulations decree otherwise. However, the WHO recommends otherwise, cautioning against dropping mask mandates and social distancing policies for even fully vaccinated persons.

“Vaccine alone won’t stop community transmission,” said WHO assistant director-general Dr. Mariangela Simao during a news briefing. “People need to continue to use masks consistently, be in ventilated spaces, hand hygiene. . . the physical distance, avoid crowding. This still continues to be extremely important, even if you’re vaccinated when you have a community transmission ongoing.”