Potential for U.S. Truck Convoy as Canadian Occupation is Diffused 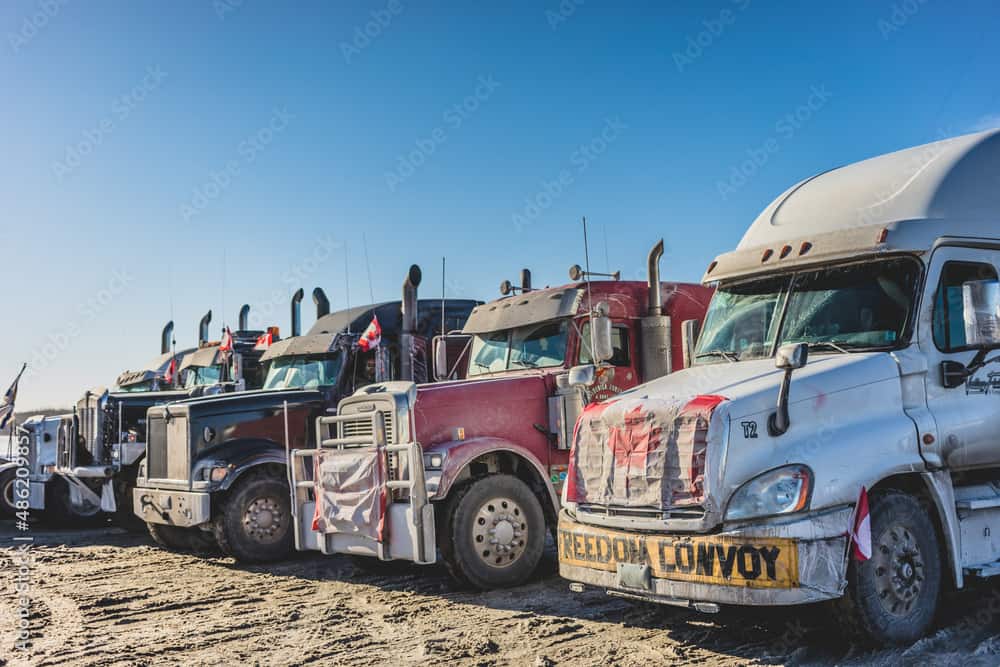 For more than three weeks, truck drivers in Ottawa lined the streets of the Canadian capital, protesting vaccine mandates for those crossing the U.S. border. That initial protest sparked more than a dozen blockades and signs of opposition in cities across Canada and an emerging protest among truckers in the U.S.

Truckers in the U.S. are planning copycat protests within the next week. A group calling themselves the “People’s Convoy” plan to drive across the coast from Adelanto, Calif., to Washington, arriving in time for President Joe Biden’s State of the Union address.

At issue is a mandate from the Canadian government that unvaccinated travelers entering their borders must be vaccinated or must quarantine upon arrival, effective January 15. This was soon followed by a similar stance from the U.S. Department of Homeland Security effective January 22, stating non-American travelers from Canada and Mexico – including truck drivers – must be fully vaccinated or will not be allowed to cross the borders.

Soon after the mandate went into effect, Canadian truckers began to express their objection to the requirement. On January 29, a convoy of truckers from across the country descended on the capital touting themselves as “The Freedom Convoy 2022.” Thousands filled the streets in front of Parliament, their parked trucks restricting access and disrupting businesses.

A week later, hundreds of those participating in the rally still remained, creating noise and chaos downtown. While there was initial support for the truckers across the country, patience began to quickly wear thin as the protesters outstayed their welcome. Honking horns at all hours, nightly fireworks, and intimidating confrontations on streets and in shops annoyed and upset many of those in the residential areas of downtown Ottawa.

The protests then spread to other cities as well as bridges and border crossings, including the link between Port Huron, Mich., and Sarina, Ontario, and Detroit, Mich., and Windsor, Ontario. Truckers blocked bridges between the two countries and prevented cargo from entering or leaving. Automakers, still hurting from global supply chain issues and pandemic shutdowns had to close factories for several days during the protests. The closures evoked frustration from the leaders of these factories.

In a public statement, leaders of Unifor condemned the actions of those creating the blockade and asked them to cease. The statement noted that Unifor, which represents union autoworkers in Canada, “believes in the right to protest,” but urged the “Freedom Convoy” to allow goods to move across the borders.

“…protestors are denying workers access to their jobs and economic security, including thousands of Unifor members. This disruption threatens the job security of members, many who are also facing layoffs due to microchip shortages and other supply chain challenges,” the statement read.

Despite a court order to end the Windsor blockade on February 11, protesters remained until February 13 when Canadian law enforcement cracked down on the dissenters. The situation so far has caused an estimated $1 billion loss to the economies of the two countries.

The Canadian Trucking Alliance, representing 2,500 carriers, operators, and suppliers, has expressed its criticism with the “Freedom Convoy.” On January 22 the organization released a statement to those considering these protests. “The Canadian Trucking Alliance (CTA) does not support and strongly disapproves of any protests on public roadways, highways, and bridges. CTA believes such actions – especially those that interfere with public safety – are not how disagreements with government policies should be expressed.”

CTA president Stephen Laskowski then stated that the industry should “adapt and comply with the [vaccination] mandate. The only way to cross the border, in a commercial truck or any other vehicle, is to get vaccinated.”

While the American Trucking Association also released a statement condemning the protests and barriers, CEO Chris Spear was more vocal about truckers’ rights not to vaccinate.

“We held serious concerns about the unintended impact a vaccine mandate would have on our nation’s supply chain and ongoing COVID response efforts, which is why ATA challenged the OSHA rule all the way to the Supreme Court – where we prevailed,” Spear said in a statement on February 10.

Whether the vaccination requirement is truly an issue for all Canadian truckers remains uncertain. The CTA stated that more than 85 percent of truckers have been fully vaccinated. Conversely, the vaccination rate of truckers in the U.S. is far lower, at an estimated 50 to 60 percent, according to the ATA.

Sentiment in Canada has been largely split between those sympathetic to the truck driver’s concerns and those who believe their stance is “wrong.” Fifty-four percent of those interviewed don’t support the protests, and of those who support the truckers, many feel less sympathy with the use of racism and intolerance by protestors.

Many drivers have expressed a similar dissent with the “Freedom Convoy,” stating that the objections have shone a negative light on an industry that has other issues, and the protests against vaccines have shifted focus away from things that should be discussed. The protests have also hurt the livelihood of drivers trying to pass through the blockade and caused an increase in prices on both sides of the border during a time that inflation has already negatively impacted American and Canadian wallets.