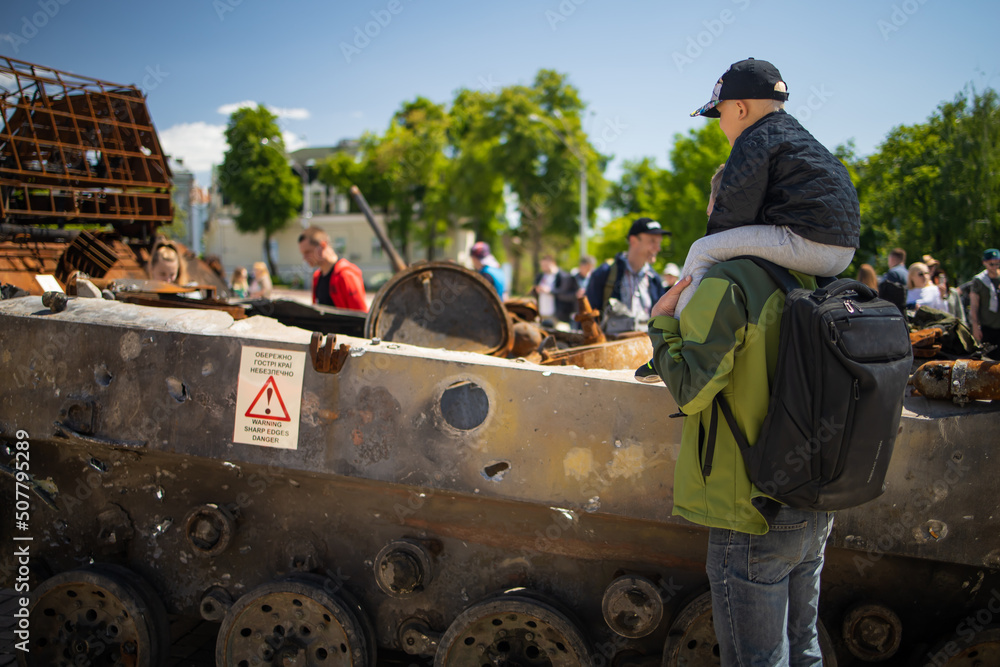 UKRAINE - May. 24, 2022: Broken tanks, combat vehicles and other burnt military equipment of the Russian invaders in Kiev region Photo credit/AdobeStockImages

The Russia-Ukraine war will have longstanding impacts on geopolitics and geoeconomics, from the European Union and the Americas to India and China.

The ripple effects of the Russia-Ukraine War extend far and wide, but they are perhaps nowhere more monumental than the potential for future conflict between great powers, China and the US, in the economic sphere.

The US and EU have largely frozen Russia out of the Western financial system with unprecedented financial force. The US/EU-led response to the invasion has been wide-ranging, from sanctioning the Russian Central Bank to removing many Russian banks from the SWIFT network. After much negotiation, the European Union has also made a compromise that will block 90% of Russian oil imports to the Union by the end of 2022.

While some Ukrainians have pled for direct military intervention and Western governments have funneled tens of billion dollars of weapons to the Ukrainian government, both Russia and NATO knew the Western response to the war would be primarily limited to financial sanctions.

“Having explicitly ruled out military action, it [sanctions] was perhaps the only plausible deterrent or coercive instrument that could have been employed. The US had made up its mind from the get-go to go down the sanctions route,” said Mrugank Bhusari, program assistant at the Atlantic Council GeoEconomics Center.

The crushing impact of sanctions is expected to severely harm the Russian GDP as billionaires and businesses struggle to access international markets, and multinational corporations willingly depart Russia for good PR back home.

Russia has been able to withstand short-term economic shocks, and sanctions have not led to the capitulation of the Putin regime as predicted by some commentators. But, the long-term economic prospects of Russia remain bleak.

During the war in Ukraine, what Russia is trying to do with missiles and tanks, the United States attempts to counter with one of their most significant power moves, flexing financial muscle and dollar dominance.

For many years, there has been growing concern amongst US economic advisers and policymakers that Russia and China will lead a two-pronged approach to further the goal of de-dollarization. Undoubtedly, Russia now has to explore alternative methods in the short and long term to conduct trade in currencies that are not the dollar or the euro.

But will the Western response spur a further thrust to de-dollarize markets and trade in the global economy?

Bhusari remains unsure about Russian-Chinese cooperation in the short term, “we should be careful to not overplay the willingness of China to engage with Russia right now. Would Chinese firms that cannot trade in dollars with Russian firms be willing to take on a plummeting ruble?”

Consequences of the Russia-Ukraine War

The United States has issued warnings to countries that seek to circumvent US-EU-led sanctions. Most notably, the so-called architect of US sanctions against Russia, Deputy National Security Adviser Daleep Singh, warned his Indian counterparts in early April of “consequences” for making moves such as facilitating a rupee-rouble payment mechanism.

The veiled threats give the United States some leverage to increase sanctions further and create a slightly more united front. However, they still have to contend with multiple interests, including trade with China, relations with India, and the US reputation in much of Asia and Africa.

“Considerations regarding China are becoming increasingly relevant now as the US considers next steps and possible options for escalation,” commented Bhusari.

The US is weighing the impact of further sanctions, considering whether they will push China and Russia closer together. After possible Russian war crimes, the US and EU announced an additional round of Russian sanctions on April 6. Since early April, a slow trickle of sanctions has continued with EU restrictions on oil, the biggest shoe still yet to drop.

“For instance, as the US considers the possibilities of secondary sanctions to cut off any lifelines for the Russian economy or a global oil embargo, it is walking a fine line between preventing convergence of interests between Russia and China without pre-emptively punishing China,” said Bhusari.

In terms of ratcheting up economic tensions, Bhusari outlined two possibilities that the US is considering.

First is a sanction on Russian energy exports, “If [the US] can coordinate a multilateral effort to sanction energy exports, at least to Europe, that would represent a significant escalation. However, that seems unlikely currently with inflation surging in Europe and higher gas prices in winter may not sit well with domestic audiences.”

While the United States is not very reliant on these natural resources, it has to work with its NATO allies in Europe to present a united front. For example, Germany imports 34% of its crude oil from Russia and 53% of its hard coal from Russia.

Bhusari and other US analysts/policymakers realize pushing the EU here will be difficult as it could potentially have a greater negative impact on the European economy than the Russian economy.

Secondly, and perhaps more likely, are secondary sanctions, “[this] would pull the plug on the remaining external lifelines for the Russian economy. This is possible, at least targeted at specific sectors or types of activity, but could inadvertently punish third countries that may not have easy or affordable alternatives.”

With the current set of sanctions, the larger concern is the knock-on effect it has on less developed economies. For example, Russia is one of the world’s biggest exporters of wheat, and many experts have warned of greater food insecurity for poorer countries.

Spiraling inflation can also make basic foodstuffs unaffordable for millions across the globe, and food price protests have been seen in Iraq, Peru, and Albania since Russia invaded Ukraine. These “third countries”, as Bhusari refers to them, could be at risk for destabilization and unrest.

Sanctions against Russia are largely a “Western” phenomenon with much of the ‘Global South’ refraining for sanctioning Russia for a whole host of reasons.

A potential escalation in financial sanctions and downturn in the global economy also runs the risk of signaling to other countries that they might need to reconsider their reliance on American and European economic systems.

Iran, Venezuela, North Korea, and other countries have already felt the crushing impact of American and European sanctions on their economy, with particular devastation for civilian life. But, Bhusari notes that sanctions against Russia have been more “coordinated and multilateral,” giving them more legitimacy than some previous sanctions.

Additional financial sanctions from the US and EU may serve as a catalyst for further de-dollarization for China, and the US policymakers have to take the repercussions into account.

“Even as the dollar has actually strengthened in the short term in the last month, over the longer term, it is possible that this experience further convinces China of the need to be less reliant on the international financial system,” said Bhusari.

But when asked about China picking up the slack in the Russian economy caused by sanctions, Bhusari said, “how far would China want to go in assisting Russia and risk deteriorating ties with Europe and the US if it seems like it is enabling Russia’s actions?”

Thus far, China has taken a different tack than sanctions; however, their reaction to sanctions also plays a role in how NATO allies think about sanctions. If they punish Russia too hard, this could necessitate further financial ties to China.

However, Bhusari does not believe that the US is overly concerned about Russian-Chinese financial collaboration in the short term.

“In the absence of any major network effect advantage of other banks joining and only a half-hearted collaboration on developing alternate payment systems in the past, it is difficult to see why China would now be interested in accelerating that collaboration.”

While the US view is that the sanctions against Russia taken thus far will not drive China and Russia’s financial systems immediately to each other, de-dollarization is still a consideration for US economic policymakers.

“This is not to say that both (China and Russia) won’t continue pursuing de-dollarization on their own terms,” Bhusari said.

But, the two countries intertwining in the banking sector is not an imminent worry for Bhusari, “it is unlikely that China would be interested in pushing for a potential SPFS-CIPS collaboration in the current environment.”