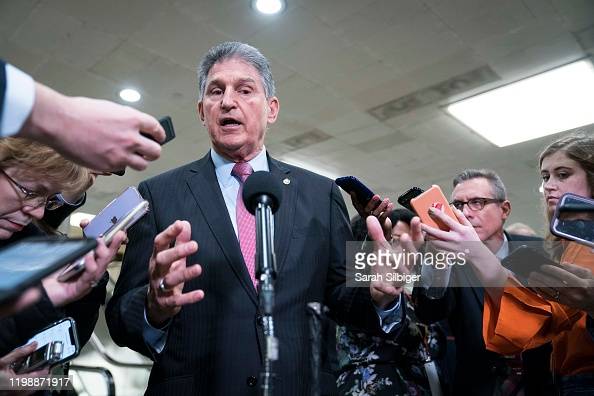 WASHINGTON, DC - FEBRUARY 05: Senator Joe Manchin (D-WV) speaks to the press near the Senate subway following a vote in the Senate impeachment trial that acquitted President Donald Trump of all charges on February 5, 2020 in Washington, DC. After the House impeached Trump last year, the Senate voted today to acquit the President on two articles of impeachment as the trial concludes. (Photo by Sarah Silbiger/Getty Images)

This country isn’t run by the Joe you think it is. While Joe Biden may be the face of this nation, upon closer inspection, time and time again, it’s Joe Manchin running the show.

Although he is just one man, Democrats are reliant on Manchin to pass almost any form of legislation. But how did it come to this? Where did it all begin? Who is Joe Manchin and why is he constantly breaking away from the rest of his party?

It is essential to look at Manchin’s past and how he attained the power he yields today. Manchin has enjoyed a long career in his home state West Virginia, beginning with his successful run for the West Virginia House of Delegates in 1982. He served four years here before moving to the state Senate for the next ten years.

In 2000, he was elected West Virginia’s secretary of state before serving as state governor from 2005 to 2010. After the death of U.S Sen. Robert Byrd, Manchin ran in the special election to become West Virginia’s new Senator in Congress and won in late 2010 before being re-elected for full terms in 2012 and 2018.

Manchin has long held a reputation as one of the more conservative members of the Democratic party. In fact, from 2000 onward – West Virginia’s politics started leaning heavily toward the Republican Party. When it comes to U.S Presidential Elections, voters favored George W. Bush, John McCain, Mitt Romney, and then most recently, Donald Trump.

From the moment Manchin joined Congress, he quickly became one of the outliers of the party, regularly disagreeing with President Barack Obama until the end of Barack’s presidency in 2016. In fact in 2014, Manchin told The New York Times that his relationship with Obama was “fairly nonexistent.”

While endorsement of the aforementioned policies would reflect the current ideals of the Democratic Party, Manchin’s rejection of these efforts seemingly aligned more closely with Republicans.

When Donald Trump was elected president in 2016, Manchin supported the new president’s stances on immigration policies and the construction of a wall along the US southern border. In addition, Manchin voted to confirm the majority of Trump’s cabinet and judicial appointees, including Associate Justice Brett Kavanaugh.

But Manchin didn’t ascend to the national spotlight until the election of President Joe Biden.

In 2020, Joe Biden was elected President of the United States, followed by Democrats flipping the Senate and winning the majority in the House of Representatives. This would give the illusion that the Democratic party held power in Congress as well as the office of the presidency.

While Democrats held the majority of members in the House, there remained a 50-50 split with Republicans in the Senate. It was now dependent on Vice President Kamala Harris to break the tie with the  51st vote, providing Democrats a slight majority.

As a reminder, the process follows as such:

With the 51-vote majority, Democrats can pass any bill deemed budget-adjacent without needing the 60-vote threshold to pass a bill in the Senate. This means they do not require any Republican votes as long as they achieve every Democratic vote. This, at the time, was great news for President-elect Joe Biden as it meant he could push through the majority of his campaign promises and progress on his plans for the country.

However, if one Democrat disagrees with the rest of the party, the bill is in jeopardy as it’s not likely to gain favor with Republicans. This dilemma is what has brought notoriety to Joe Manchin in recent days.

When Biden proposed his initial $3.5 trillion Build Back Better infrastructure plan in 2021, he faced resistance from Manchin immediately. After months of negotiating with the White House, they ultimately scaled the proposal to $1.75 trillion. It appeared Manchin still wasn’t pleased with this adjustment, expressing concern about the bill’s potential impact on inflation and the national debt.

“Throughout the last three months, I have been straightforward about my concerns that I will not support a reconciliation package that expands social programs and irresponsibly adds to our nearly $29 trillion in national debt that no one else seems to care about,” Manchin said in a statement.

Fast forward to 2022, and the Build Back Better bill has still not made it through the Senate.

Manchin then opposed the bid to relax the filibuster, which would have removed the 60-vote threshold held in the Senate, making the Senate more similar to the House of Representatives by only needing a majority vote for a bill to pass. His rejection meant that he remained the decisive vote in the Senate.

He followed it up by rejecting a major voting-rights bill that was part of Biden’s campaign promises, stating that he was looking for Republican compromise first.

And in the past week, he tanked a $375 billion climate change bill that included raising taxes on America’s wealthiest citizens and corporations.

In turn, Biden has been unable to pass many of his campaign promises he made during his run for presidency. And with the midterms looming overhead, the Democratic Party is feeling the pressure.

“The problem was that we continued to talk to Manchin like he was serious; he was not,” Sanders said recently on ABC’s “This Week”. “This is a guy who’s a major recipient of fossil fuel money, a guy who has received campaign contributions from 25 Republican billionaires.”

According to The Guardian, Manchin has received more political donations from the oil and gas industry than any other senator in the current 2022 electoral cycle and more than double the second largest recipient.

Manchin claims he is representing the wants and needs of his constituents, who are predominantly conservative. Furthermore, he claims that these policies and proposals will only lead to higher inflation.

But it seems Manchin doesn’t only disagree with his party regarding bills. He’s also tanked a few of Biden’s cabinet positions. First, he opposed the nomination of Neera Tanden for the Office of Management and Budget, citing her past critical comments regarding Republicans.

He then fought the nomination of Sarah Bloom Raskin for the Federal Reserve, his reasons being he doesn’t believe she’ll do enough to face the country’s rising inflation and energy costs.

So then the question becomes – what are Democrats left to do? Can Democrats continue to attempt to pass legislation with the hopes that less conservative Democrats will be elected during the midterm elections? Or will Manchin continue with his stronghold on the Biden presidency, potentially causing Democrats to lose their majority?

It appears – as with so many other matters at this moment – that is up to Manchin to decide.