Weekend Review: Trump Checked Out of Presidency, Refusing to Concede 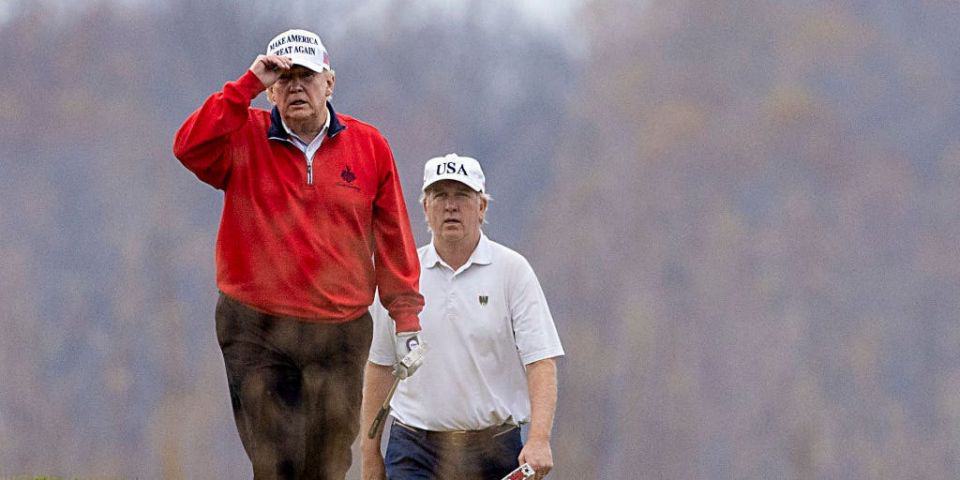 President Trump visits one of his golf clubs while missing a G20 Summit on global pandemic efforts. Tasos Katopodis/Getty Images

This weekend, the president skipped a virtual G20 Summit meeting with world leaders who were discussing the coronavirus pandemic. Trump played golf instead.

The US has the most cases and pandemic-related deaths than any country in the world, and the G20 summit was on Trump’s official schedule. Instead, he essentially popped in to say he would see the leaders next year, and then he left for one of his own golf courses.

In spite of all legal indications to the contrary, Donald Trump continues to claim that the election was fraudulent.

Yet another Trump lawsuit was dismissed on Saturday, one which sought to block certification of Pennsylvania election results. Trump’s legal team claimed that Republicans were disadvantaged by everything from state laws to illegal votes.

Republican Senator Pat Toomey of Pennsylvania called the judge who dismissed the case “a longtime conservative Republican”. Nevertheless, Trump’s lawyer, Rudy Giuliani, insisted that there “is so much evidence” that “election officials blatantly ignored Pennsylvania’s law”.

Toomey said in a Saturday night statement that “President Trump has exhausted all plausible legal options to challenge the result of the presidential race in Pennsylvania”.

Trump’s legal team has made clear that they intend to file yet another amendment complaint in Pennsylvania, “to add claims based on newly learned facts”.

Meanwhile, a group of voters in Detroit is suing Trump for allegedly “disenfranchising voters in predominately Black cities”. Trump has put personal pressure on Republican members of the Wayne County Board of Canvassers in Michigan. This led to board members trying to change their certification of the election count, which the Secretary of State would not allow.

The suit asks for intervention to stop Trump from exerting political pressure over officials in Michigan and other states.

Following months of campaigning highlighted by Caracal Reports, #NoAmerenShutoffs and residents of Illinois have achieved a victory over corporate profit.

Residential customers of Ameren Illinois will be under a disconnection moratorium through March 31, 2021. For reference, the company disconnected more than 14,500 utility services last month as Covid-19 was ravaging the state.

Ameren did not publicize that the decision was a concession to the #NoAmerenShutoffs campaign. There is no doubt that activism played a part, though the company claimed the shutoffs were due to lowering temperatures.

The company announced they were suspending shutoffs a day after Caracal Reports published an article which noted that stock in Ameren benefited from pandemic panic. The article was a collaborative effort with Illinois activist Allan Max Axelrod, who is the campaign lead for #NoAmerenShutoffs. He penned a separate piece for United Left to detail his research.

Warren Buffett, who is currently the sixth wealthiest person in the world according to Forbes, owns Berkshire Hathaway. He has a long history of passing billions of dollars back and forth in various deals with the Pritzker family.

Stock value in Ameren and Berkshire Hathaway visibly benefited when shutoffs caused a rush of panic payments. This gives reason to directly question whether Pritzker’s current stock interests conflict with his willingness to effectively govern.

While this announcement from Ameren Illinois is a major victory for #NoAmerenShutoffs, their work is not complete. The campaign has shifted focus to water shutoffs and helped arrange a car rally.

On Saturday, the Nigerian army admitted that they used live rounds on protesters at the Lekki tollgate last month. A general claimed that the live rounds were intended for “hoodlums” and were not used on peaceful protesters.

On Friday, Nigeria’s Minister for Information dismissed a CNN report which provided evidence of at least one death at Lekki tollgate. He reiterated the claim that the military had fired blanks into the air and had never fired on protesters.

CNN’s investigation of video and ballistics evidence found that at least one person died and dozens more were injured by the Nigerian army. Witnesses at Lekki tollgate reported multiple dead bodies were removed from the scene by military and police following the shooting.

Many families are still searching for loved ones and protesters have gone into hiding since the October 20 incident.