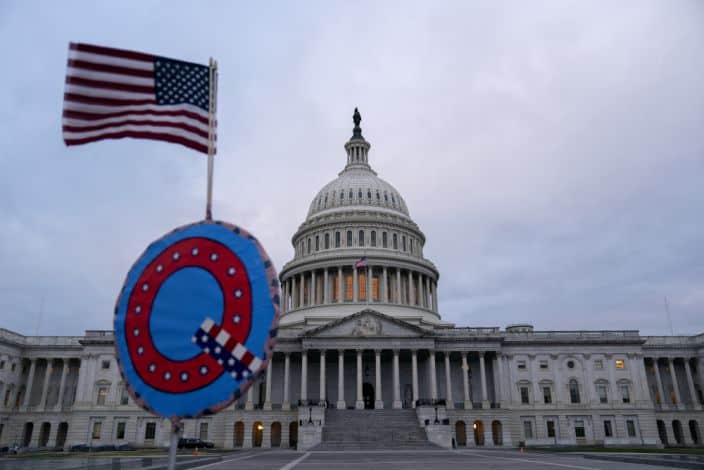 The U.S. Capitol in D.C. on Wednesday, Jan. 6, 2021. The building was soon overrun by rage-filled pro-Trump demonstrators. Photographer: Stefani Reynolds/Bloomberg via Getty Images

On Wednesday, protesters overtook the country’s Capitol building in a pro-Trump demonstration which quickly turned into a violent revolt.

President Trump encouraged his supporters to walk to the Capitol after leaving a “Save America” rally, where he and his attorney Rudy Giuliani spoke.

Trump used the podium to restate unfounded claims of election fraud, including that Vice President Mike Pence had the power to send votes back to the states. Pence’s role was simply to oversee the count.

The president ended his speech by telling the crowd to go to Pennsylvania Avenue where Congress was in session to count Electoral College votes, and “try and give them the kind of pride and boldness that they need to take back our country.”

It was seemingly another attempt by Trump to use his supporters’ loyalty where all else has failed; to threaten colleagues and stop the confirmation of President-elect Joe Biden.

A Capitol Police officer and four others were killed in the chaos or died as a result of exacerbated medical conditions. According to a statement from the U.S. Capitol police, 42-year-old officer Brian Sicknick “was injured while physically engaging with protesters” and later died.

One woman was shot and killed, reportedly after ignoring multiple warnings from armed security and attempting to climb through a broken window. The plain-clothes officer who shot her has been suspended pending an investigation.

Reportedly, another woman was trampled to death, one man died after he suffered a heart attack, and another man had a fatal stroke.

The chaotic event led to the resignation of many Trump officials and calls for impeachment, with only days left in Trump’s presidential term.

The ease with which the group was able to demand and gain access to restricted areas of the Capitol building has added to the conversation around race and police brutality.

Democrats have achieved control of the Senate with two wins in the Georgia runoff elections. The victories were announced on Wednesday just before the commotion at the Capitol.

Reverend Raphael Warnock and Jon Osoff each defeated their Republican opponents in a pair of wins which gave a Senate majority to Democrats. This means Mitch McConnell will be replaced as Senate Majority Leader.

President Trump has been permanently banned from Twitter for repeatedly violating the company’s rules, as defined in the terms of agreement for use of the platform.

Facebook also “indefinitely” banned Trump, a ban which includes Instagram, but some reports speculate he will get those accounts back when his presidential term ends.

Trump has used social media, specifically Twitter, to spread dangerously inflammatory misinformation to his millions of followers. Calls for suspension of the president’s Twitter have been more fervent since Wednesday’s attack on the Capitol.

Twitter released a statement that said the decision came “after close review of recent Tweets from the @realDonaldTrump account and the context around them — specifically how they are being received and interpreted on and off Twitter.”

The statement noted that the company “permanently suspended the account due to the risk of further incitement of violence.”

Trump is said to be outraged and considering creating his own social media platform as a result. Currently, the right-wing platform-of-preference is Parler, which has been removed from Amazon, Apple and Google stores.

Arrest Warrant Issued for Trump in Iraq Over Death of Commander

On Thursday, Iraq issued a warrant for Trump’s arrest as part of an investigation into the death of top Iraqi paramilitary commander, Abu Mahdi al-Muhandis. He died in the same U.S. drone strike that killed Iranian general Qasem Soleimani in Baghdad last year.

Trump openly bragged about the strike at a fundraiser in Florida, gloating that he had killed the “two for the price of one.”

Iran previously issued an arrest warrant, but Interpol declined to follow it with a global notice to police forces.

Iraq, however, is an ally to the U.S. The warrant has been confirmed by the country’s Supreme Judicial Council, which operates much like the U.S. Department of Justice.

Execution is the country’s punishment for premeditated murder.

No Sign of Survivors in Plane Crash in Indonesia

An Indonesian airliner carrying 62 people crashed into the Java Sea on Saturday, presumably killing everyone onboard.

The flight was delayed for an hour, then the 26 year-old Boeing 737 plane disappeared from radar four minutes after taking off. Witnesses saw and heard an explosion before the plane was said to have dropped from the sky “like lightning”, according to the BBC.

There was no distress signal and it is unclear what caused the crash. Rescuers have located the plane’s black box and hope it will provide some answers.

All of the passengers and crew were Indonesian nationals. Of the 62 people aboard, three were babies and seven others were children.

On Friday, North Korean leader Kim Jong Un called the U.S. his country’s “biggest enemy,” and pledged to advance his own nuclear arsenal.

Kim called the U.S. “our archenemy and the biggest stumbling block to the development of our revolution.” He added that was the case “no matter who takes power in the United States,” seemingly to send a more direct message to president-elect Joe Biden.